Showing posts from November, 2012
Show All

Graph(s) of the week: adapting to technology 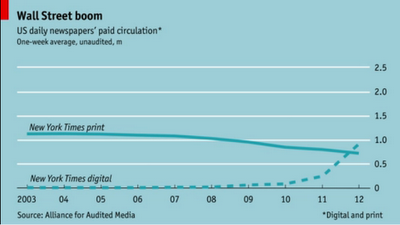 The Economist produced a great video this week in which it analyzes the US daily newspapers subscriptions and circulation.

What's most interesting here is the analysis behind the recent success of the New York Times (NYT) and the Wall Street Journal (WSJ) and the downfall of USA today and LA Times. The reason in the divergence between these two groups of daily newspapers is in the adjustment of their demand to online subscribers. (see graphs below)
This is a perfect example of an adaptation to the new technological environment. The technological change in people's behavioral patterns was recognized firstly as a threat to the newspaper industry but after a while it was embraced and adjusted to. Advertising online couldn't be the only source of income. They needed more online subscribers.
This is also another good example of how it takes an exogenous shock like the crisis and the consequential loss of revenues for a company to realize that it needs to change. It was only af…
3 comments
Read more

November 29, 2012
I started writing for the Centre for Policy Studies, an independent free market think tank, co-founded in 1974 by none other than Margaret Thatcher, and Sir Keith Joseph. This is where the "Conservative revolution [of the 80-ies] began".
Here's a quote from Lady Thatcher about the CPS:
"I do think we have accomplished the revival of the philosophy and principles of a free society, and the acceptance of it. And that is absolutely the thing that I live for. History will accord a very great place to Keith Joseph in that accomplishment. A tremendous place because he was imbued by this passion too. We set up the Centre for Policy Studies, and it has propagated those ideas, and they have been accepted." Margaret Thatcher, 1979
My first text for them, entitled Seeking a Dynamic Recovery, was mostly on ideas on how to ignite a dynamic recovery in Western Europe. It focuses on innovation, investments and trade as the essential principles for surpassing the productivity…
3 comments
Read more

Reinhart and Rogoff on the crisis and the recovery

Carmen Reinhart and Kenneth Rogoff, Harvard professors and the authors of the brilliant "This Time is Different", did an interview for Barron's  last week on the causes of the crisis and the slow recovery from it. (In a post from November last year I summarized some of their main points.)

Read the whole interview, it's very interesting. In a majority of their arguments I agree with them, some of them I have used repeatedly on the blog. For example:  "No two crises are identical. Policies differ, and political systems differ. But the common thread is this sustained buildup in a period of really bold optimism, often predicated on the expectation that if asset prices have gone up today, they are going to go up tomorrow and, therefore, we can borrow fairly indiscriminately without a problem. What was also very illuminating was that the U.S. wasn't alone. You saw Ireland, Spain, Portugal, Greece, and the U.K. with a very similar pattern of debt buildup. In all th…
Post a comment
Read more 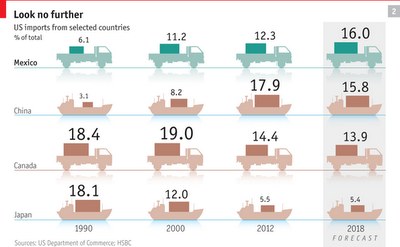 Trade was covered only briefly on the blog so far (see here and here), but being such an important subject it deserves more attention. Today I draw on three examples, one positive, two negative, all three emphasizing the importance of trade on economic development, wealth etc.
The first example (the positive one) comes from the Economist's Free Exchange blog and the Wall Street Journal on the story behind the Mexican automobile industry.
After going through Tyler Cowen's "Mexico facts of the day" on how Mexico is today the world's fourth largest exporter of cars (after Germany, Japan and South Korea) hoping to surpass South Korea in a few years, and with a strong interest in conquering the Chinese market after already having a big role in the US car market, an article from March this year in the Economist comparing the automobile manufacturing industries of Brazil and Mexico, explains the recent outburst of Mexico's automobile export success: "By throwin…
1 comment
Read more

Graph of the week: Doubling your GDP 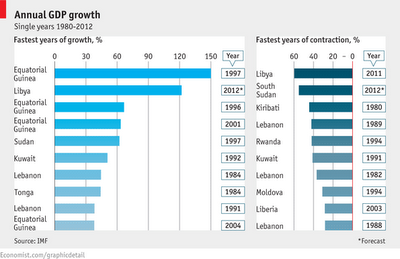 Is it possible to double one's GDP in a single year? Apparently it is:
...but only following a significant exogenous shock in the year before.
Having seen this, I can't help at wonder is this what the demand-side economists mean when they say "broken window" is good for growth? So are broken windows good for growth? I stick with the conclusion of my earlier text and claim No, they are not.
The graph above seems to suggest that Libya, with its projected growth this year of 122%, should be thankful for what happened in 2011 not only in terms of getting rid of a dictator, but also in spurring rapid economic growth and a swift recovery:   "Libya’s economy shrank by about 60% in 2011, as the country descended into civil war and foreign oil firms evacuated their staff. Sharp contractions set the stage for rebounds, both economically and statistically. They can create a lot of slack—unused capacity or unemployed workers—that can be swiftly exploited when the economy r…
Post a comment
Read more

Another one on tax hikes vs spending cuts

This is becoming one of the most frequent topics on the blog, just as much as the Eurozone was exactly around this time a year ago (in fact, November 2011 was the boiling point for the Eurozone crisis).
The debates on the recovery are still occupying most of the attention among economists, especially in perspective to elections and politics. These debates tend to be divided on the basic approach as to how are we supposed to initiate stronger economic growth. Those on a center-left political and economic spectrum often speak of negative consequences of the austerity approach, emphasizing the "austerity vs. growth" story. Their approach is to initiate a stimulus combined with higher taxes on the rich immediately (in the short run), and then combat the fiscal sustainability in the long run. The center-right economic and political arguments desire an immediate combat of the deficit and the debt (austerity) and want to do it mainly through spending cuts and tax cuts (in order to…
4 comments
Read more 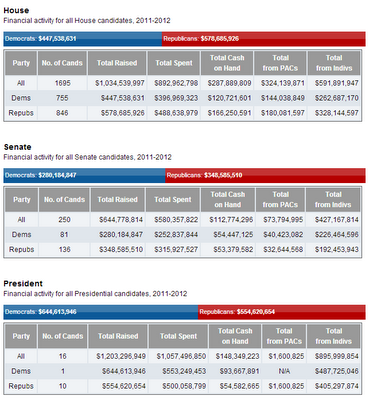 Back to political economy again. The recently finished US elections offered a unique perspective on what campaign money can and can't do.
And while the majority is worried that more money being allowed to circulate in campaign spending will inevitably result in the end of democracy, others claim that this election is proof that it won't.
There is an academic paper by Ansolabehere et al. (2003) "Why is there so little money in US politics", that claims that individuals, not interest groups, are the main drivers in campaign spending, that campaign contributions fall as a % of GDP, not rise, and finally that there is little relationship between money and legislator votes. They tend to overturn the traditional argument (conventional wisdom) that differences in campaign spending drive electoral outcomes. The strength of this argument in political science was exemplified by old regression models that could easily establish a positive relationship between money and electo…
5 comments
Read more 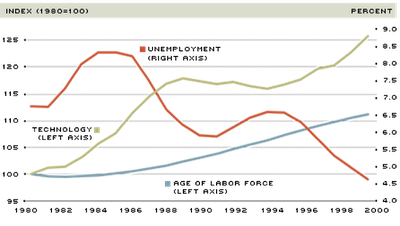 I ran across a great article from Ken Rogoff on Project Syndicate a few weeks ago where he dismantles the ever-present assumption among politicians and voters that new abrupt technological changes lead to massive unemployment. "Since the dawn of the industrial age, a recurrent fear has been that technological change will spawn mass unemployment. Neoclassical economists predicted that this would not happen, because people would find other jobs, albeit possibly after a long period of painful adjustment.
By and large, that prediction has proven to be correct. Two hundred years of breathtaking innovation since the dawn of the industrial age have produced rising living standards for ordinary people in much of the world, with no sharply rising trend for unemployment. Yes, there have been many problems, notably bouts of staggering inequality and increasingly horrific wars. On balance, however, throughout much of the world, people live longer, work much fewer hours, and lead generally hea…
9 comments
Read more

Graph(s) of the week: US electoral predictions and results 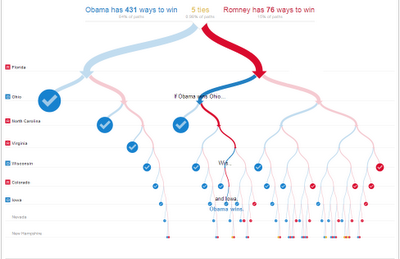 Diverting from economics for a brief movement, and switching to politics.

During today's (yesterday's) election day the New York Times had an interesting interactive feature in the form of a game theoretical "tree" where different outcomes were paired together based on the electoral result in 9 swing states.
This is my prediction from yesterday on the outcomes in swing states (click to enlarge):

As you can notice, my prediction is an overall Obama victory in a scenario in which he looses Florida, North Carolina, Virginia and Colorado to Romney, but retains victories in Ohio, Wisconsin and Iowa. I would have given both Nevada and New Hampshire to Obama as well (despite Romney's summer house being located in the former state). However the last two states wouldn't make any difference since the paring was made based on the relative significance of …
Post a comment
Read more

Are natural disasters good for the economy? 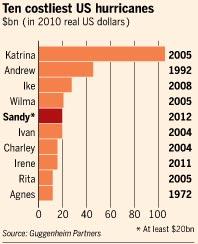 A classical Keynesian approach would suggest that they are. Consider the following example. According to the demand-side approach to kick-starting a recovery, getting governments and consumers to spend more will induce higher consumption, which will raise aggregate demand and ultimately result in higher short-run GDP growth, which will be the basis point for a longer-run restoration of the pre-crisis growth path.
This theory implies that the government should step in and provide the jobs for those who lost it during the crisis in order to stimulate economic activity. In terms of pure logic, the government should attempt to provide even the most meaningless jobs like digging holes and filling them up in order to get more cash to consumers and incentivise their spending.
But why is it better to pay the unemployed to dig up holes instead of simply sending them welfare checks every month? Well, since digging up holes adds to GDP as a newly produced government infrastructure investment.…
5 comments
Read more
More posts