Showing posts from February, 2014
Show All

February 21, 2014
Another edition of the best from the rest in the blogosphere and beyond:

1. Ryan Avent, "Labour markets: A theory of troubles", The Economist, Free Exchange blog - a great article on the productivity puzzle that has been going on for quite a while. Here are some of the key trends in the past 30 years (during the ongoing third industrial revolution) that he summarizes:  "Since the early 1980s, labour markets have polarised or “hollowed out” (Employment in high- and low-skill positions has risen substantially relative to middle-skill jobs.)Polarisation is mostly attributable to elimination of “routine” tasks by trade and technology (automation and trade are responsible for displacement of routine tasks previously done by middle-skill workers, in both manufacturing and clerical or service activities, leading to polarisation of local and national labour markets)Since the early 1980s, polarisation has occurred almost entirely during recessions
(This pattern is linked to the ph…
Post a comment
Read more

Graph of the week: Wine consumption and academic performance

One of the most important lessons of economics is that correlation does not imply causation. Just because we see a pattern in the data, or we observe one event following another, does not mean one event CAUSED the other. In order to prove (abiet partially) a causal relationship you need to observe the two effects while controling for a whole number of possibilities that can affect both. This is why econometrics is used in social sciences which tend to suffer from a deficiency of clearly proving a certain hypothesis.

Keeping this in mind we have a look at this week's graph of the week, depicting the alleged relationship between wine consumption and student achievement. The graph was originally produced by a Cambridge graduate, and was used by the Economist: The graph seems to point to an interesting positive correlation between how much does a Cambridge or Oxford college spend on wine to the percentage of students gaining a first class degree. This would make us conclude that coll…
Post a comment
Read more

There has been a series of posts on emerging market troubles in the past few weeks. Dani Rodrik, Nouriel Roubini, Kenneth Rogoff, Tyler Cowen and the FT's Beyondbrics have all pondered on the great issues facing the emerging markets in the past few years and months (Project Syndicate has an entire section devoted to the loss of momentum in the EMs dubbed "Subemerging Markets?"). Many of the concerns they express don't seem to be fading, in fact they are likely to become even more pronounced in the years to come.
Arguably the main issue over the past months have been declining currencies and capital flight, mostly due to various political disruptions (Argentina, Brazil, Turkey, Ukraine, Thailand, India, etc.). In addition the tapering of Fed's quantitative easing (tighter monetary policy) is causing havoc to many countries whose currencies are tied to the dollar and whose foreign debt is dollar-denominated.
It seems that the economic crisis in the West has afte…
Post a comment
Read more

An overview of the best of the rest in the economic blogosphere and beyond (and some news as well).
1. The US unemployment rate is down to 6.6% (BLS)
"Total nonfarm payroll employment rose by 113,000 in January, and the unemployment rate was little changed at 6.6 percent ...
After accounting for the annual adjustment to the population controls, the civilian labor force rose by 499,000 in January, and the labor force participation rate edged up to 63.0 percent. Total employment, as measured by the household survey, increased by 616,000 over the month, and the employment-population ratio increased by 0.2 percentage point to 58.8 percent...." Yet the E-P ratio is still where it was in 2009 (even though some of the people who lost jobs in the crash got them back, others (e.g. new entries) are still reluctant to entering the market. There is also a matter of many elderly workers choosing early retirement, in addition to many old inefficient jobs being lost, while the process of re…
3 comments
Read more

"Corruption in the EU is breathtaking!" the EU Commission reports. It is estimated to cost Europe at least 120bn euros annually. It's probably even bigger than that. This is the first time the Commission has done such a survey across all 28 states. So this may explain why they were so surprised with the results.
Here's only a few interesting findings from the report: "The country analyses show that public procurement is particularly prone to corruption in the Member States, owing to deficient control mechanisms and risk management" "Provoked by the crisis, social protests have targeted not only economic and social policies, but also the integrity and accountability of political elites. High-profile scandals associated with corruption, misuse of public funds or unethical behaviour by politicians have contributed to public discontent and mistrust of the political system." "In some Member States, shortcomings exist regarding the supervision of …
3 comments
Read more 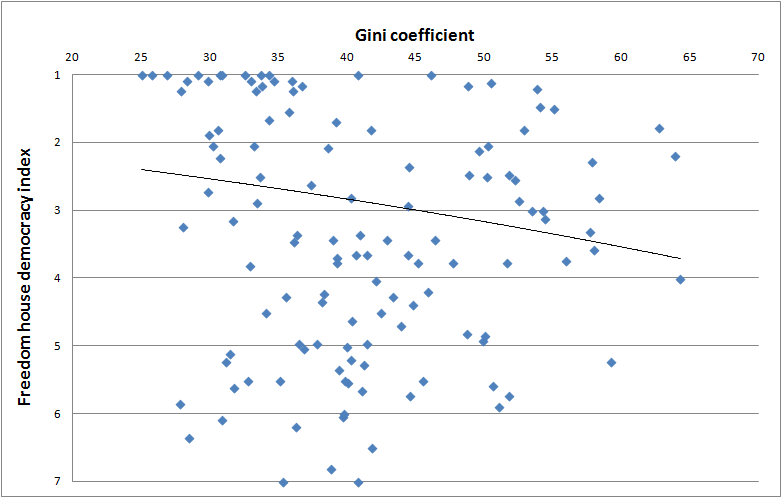 Acemoglu and Robinson have another excellent post at their Why Nations Fail blog. This time the topic is "Democracy vs. inequality".
We are by now more or less aware that income inequality in the US and in most of the rich OECD world is higher today than it was some 30 to 40 years ago. I've discussed the implications behind this increase several times before (see here and here) but the fact remains that inequality is exhibiting a persistent increase, which is robust to both expansionary and contractionary economic times. We might even say that it became a stylized fact of the developed world (amid some worthy exceptions of course). The question on everyone's lips is why would a democracy result in rising inequality?
A&R point to one of the seminal papers in political economy, that of Meltzer and Richard (1981), whose theoretical model emphasized that more democracy implies more redistribution and hence lower inequality. The idea is that the median voter is usuall…
2 comments
Read more
More posts