Showing posts from April, 2016
Show All

Graph of the week: Immigration: perception vs reality 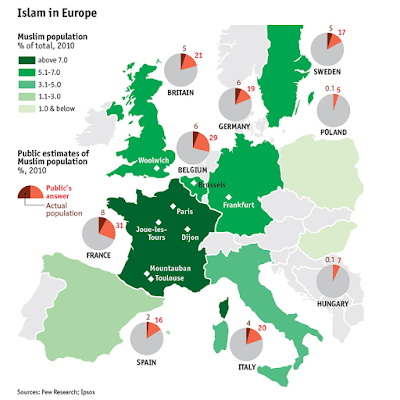 An interesting chart from the Economist about the perception and reality on the total number of Muslims in European countries. It's striking how big the overestimation gap is in the selected countries (do have in mind that these are the official figures; perhaps there are undocumented Muslim immigrants that increase the actual numbers, but I sincerely doubt that the real numbers are anywhere near the perception).  So why is there such a huge overestimation (between 3 to 8 times!) in Europe about the total number of Muslim population in their countries? In general, the anti-immigration sentiment rests on the same concept: that there are too many immigrants (many of which without any legal documents), "taking our jobs". The perception on the total number of minority immigrants in Western countries is very similar to this one from above. Their numbers are vastly overestimated.
Perhaps the reason for this is that minority immigrants tend to cluster in specific areas, prima…
Post a comment
Read more

I'm running behind with the reviews (still keeping track with the book readings though), so I'll publish the next two in space of only a week. Today it will be Gladwell's three books: Outliers, Tipping Point, and Blink (in the order that I've read them), while for next time it will be Roth's Who Gets What, and Surowiecki's Wisdom of Crowds.
Gladwell, Malcolm (2008) Outliers. The Story of Success. Little Brown

Of all his books, in my opinion, this one ranks top. In Outliers, his third book, Gladwell wants to redefine our understanding of success. The brilliant writer that he is, he takes us through a fascinating journey linking together the little bits and pieces into an overreaching yet slightly simplistic theory about luck, opportunity, hard work, intelligence, heritage, and cultural legacy, all of which are important factors that explain why some people succeed (and are thus considered "outliers").
Although this is far from a scientific treatise,…
2 comments
Read more
More posts