Showing posts from February, 2016
Show All

Separated by a border (2): electoral divisions 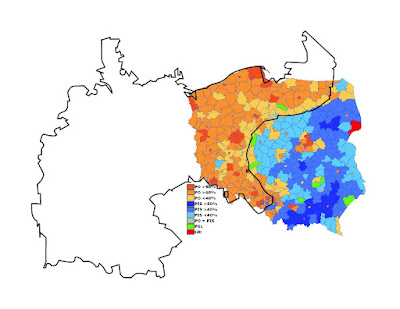 In my first Separated by a border blog (that was three years ago, but it garnered significant attention apparently) I drew institutional implications of how some countries on the same geographical area differ so much with respect to their institutional environments, living standards, income etc. Inspired by Nogales, the infamous US-Mexican example from Acemoglu and Robinson's Why Nations Fail, I drew similar cross-country comparisons between the two Koreas, the Dominican Republic and Haiti, and between Rwanda and DR Congo. The common thing with all these examples is the same geography, same culture, same (similar) history, same diseases, but different outcomes. Why? Institutions, stupid!
Today we will look at the major differences within countries, starting with voting patterns. This time it's not so much the institutions that make the difference (at least not directly), but historical patterns of development.
We start with the two most famous political science examples of e…
2 comments
Read more

The third volume of "What I've been reading" is centered around bubbles, animal spirits, crises, and its predictors (real and self-proclaimed). I'll start chronologically:

In the sequel of his highly acclaimed first edition that predicted the 2000/2001 crisis a few months before it happened, Shiller continues to debunk the rationality assumption in market behavior as he draws out a specific set of psychological, cultural and structural factors that can be held responsible for bubbles and wide-range volatility on financial markets. His price-earnings (PE) ratio (what eventually landed him a Nobel prize) as a method to predict when the market is due for correction is what got him the well-deserved critical acclaim. The PE ratio (pictured below, real time data available here) measures "how expensive the market is relative to an objective measure of the ability of corporations t…
Post a comment
Read more

The second volume of what I've been reading is all about, as I mentioned last time, the brilliant philosophy of Nassim Nicholas Taleb and a large part of his Incerto, a four volume "philosophical and practical essay on uncertainty". It contains Fooled by Randomness, Black Swan, Antifragile, and the Bed of Procrusets, plus there is another book on the way to make it five, Skin in the Game. I read the first three, each is brilliant, so I'll definitely find some time in the future to complete the Incerto. What is interesting about the three of his books I read so far is the re-occurrence of some topics in different scenaries. Already in his first book, Fooled by Randomness, Taleb introduces us to uncertainty, the role of luck, the Black Swan problem, his skin in the game philosophy (to have skin in the game means being able to put your money where your mouth is), and most importantly his underlying life philosophy of an empirical skeptic.Empirical skepticism and outrig…
Post a comment
Read more

Graphs of the week: Tax evasion and votes for Syriza 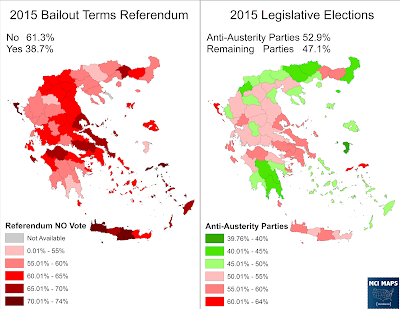 Over the past year many commentators on the Greek political situation have claimed that Syriza, the radical left party that surprisingly won the Greek elections in 2015 (twice!), drew much of its support from tax-evasion areas. In other words the tax-evading upper-middle class voted for Syriza as they wanted to continue with their tax evasion (an endemic problem in Greece) and didn't want to accept the EU-imposed bailout deal which necessitates that Greek authorities clamp down on tax evasion.
In a long overdue post I will briefly look into whether or not there is any evidence to back this claim. Below I show two sets of maps. The upper map shows results of the 2015 general elections held in January (right), and the bailout referendum (left) held in July, while the lower map shows the share of tax evasion per municipality (I've used this map before from a paper by Artavanis et al.).


Before we make the visual comparison, a quick reminder on the tax evasion part from my earli…
1 comment
Read more
More posts