Showing posts from August, 2016
Show All

What I've been reading (vol 9.) Economic history: Malthus and beyond

After the very intriguing part 1 covering two fascinating books whose contribution extends across a few scientific fields, this one lays out two books with a more contemporary historical emphasis.
Clark, Gregory (2011) A Farewell to Alms: A Brief Economic History of the World. Princeton University Press

Clark’s book is first and foremost a wonderful economic history textbook. Although it carries in its title the word “brief” it represents quite a comprehensive overview of the patterns before, during and after the Industrial Revolution that can be accredited with having created the modern world. It is a good book, full of empirical data and a very detailed overview of the facts behind the patterns responsible for modern development. It is thus more a scientific work that a popular one (closer to Diamond’s Guns, Germs, and Steel, than Harari’s Sapiens).
The book is separated into three parts, each important in painting the picture of why and how the Industrial Revolution changed thing…
Post a comment
Read more 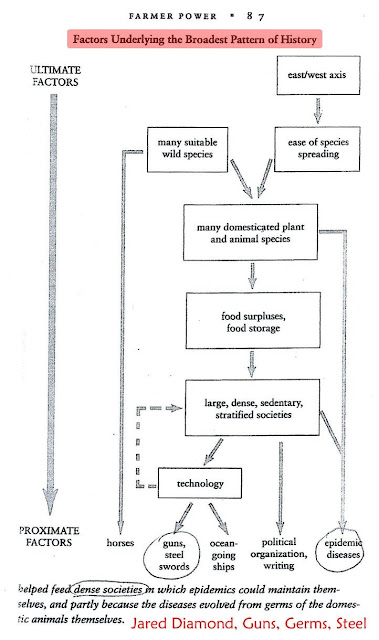 As announced in the previous blog post the next two book reviews will cover four very interesting history books (well, history to some extent). The first one is actually all about geography and anthropology, and little bit about history - the Pulitzer winning book by Jared Diamond: Guns, Germs, and Steel. It has long been on my reading list and I am finally happy to have read it, and I have to say - it hasn't disappointed. Far from it actually. I can see why it was an instant success. The second is a more recent book, Harari's Sapiens. Another bestseller with an overreaching arc that extends from the biological knowledge about our ancestors all the way to the modern technological revolution that has the power to destroy our very species. In short, two brilliant books! Let's begin.
Diamond, Jared (1997) Guns, Germs & Steel: The Fates of Human Societies. Norton, New York.
In this Pulitzer Prize-winning book, Jared Diamond, a noted polymath (made contributions in the fie…
Post a comment
Read more

Physics meets Economics: "Why Information Grows?" (or What I've been reading, vol. 7) 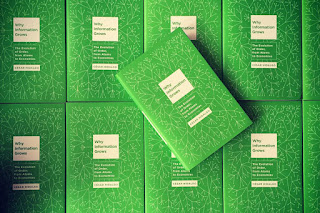 I haven't posted any book reviews for a while now. It's not that I haven't been reading the books, it's just that I failed to find the time to write the reviews. So now, in the next three, four blog posts, I will be writing a series of reviews about 8 or so books (with more to come in the following months). I will start with Cesar Hidalgo's Why Information Grows for today's single book review (it's a big one, since this is an exciting new theory), and then I move on to 4 economic history books (in two separate posts), and close with three inequality/cronyism books. After all of that, in September I will continue with my standard ramblings about economic stagnation, the role of technology and the third industrial revolution, inequality and social mobility, the endless austerity vs stimulus debates, etc. Enjoy!
Hidalgo, Cesar (2015) Why Information Grows. The Evolution of Order, from Atoms to Economies. Basic Books

The new political distinction is not left-right, but open-closed 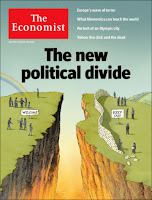 It's holiday season, and the Olympic games have just started, I know, but I read this great piece in last week's the Economist and I just had to share it with my readers. It is possibly one of their best briefing articles to date, as it tackles a very important contemporary phenomenon of a newly arising political divide across the developed world (that was the cover of the entire issue, pictured below). The left vs right is passé, so 20th century. The new distinction is open vs closed. Or in other words, liberal vs national-socialist (OK, maybe not that far away from early 20th century).
One group is against immigrants, in favor of closing the borders, advocates protectionism, and fears competition (a typical merger between left and right collectivism), while the other group is for open borders, in favor of free trade, in favor of competition and against protectionism. One group advocates and feeds from fear - fear of immigrants and foreign competition taking away domestic j…
1 comment
Read more
More posts