Showing posts from June, 2013
Show All

Graph of the week: The Great Gatsby curve 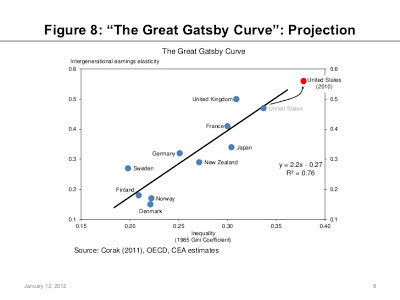 I've posted this curve in my previous blog:
(FYI: The Great Gatsby is a famous novel by an American author Scott Fitzgerald describing the decadence of the US upper classes in the "roaring 20-ies". There is (another) movie released about the book recently, staring Leonardo Di Caprio).
The source is Krueger's presentation from January last year at the Center for Economic Progress. You can see the slides here. The curve depicts a relationship between inequality (measured by the Gini index) and intergenerational earnings elasticity (if it's more elastic then people find it harder to move between income classes). The US, even though it's positioned pretty high (relative to other developed nations), is projected to be even higher if 2010 Gini were to be taken into account. This means that among the developed countries the US is by far the worst in its high inequality and its lack of upward social mobility, a phenomenon that is both worrying and puzzling for a coun…
Post a comment
Read more

The inequality conundrum (1% and beyond) 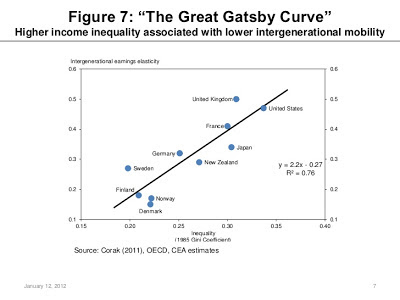 Greg Mankiw wrote an excellent paper (forthcoming in the Journal of Economic Perspectives) that caused a lot of fuss around the blogosphere. This is hardly a surprise since the title of the paper happens to be: "Defending the One Percent". However, the paper is much less provocative than the title would imply. It is portrayed as a survey of economic ideas on progressive taxation and redistribution equiped with easy to understand examples and basic utilitarian concepts. I recommend it as an excellent argument not against redistribution (as this certainly isn't the case he's making), but as an attempt to shed more light in the controversial debate on inequality and how to approach it.
Mankiw drives a persuasive argument, similar to the one I've pointed out in a previous text, that the top 1% of income earners aren't rent-seekers or those that have inherited their wealth (an argument Stiglitz tries to deliver in his book "The Price of Inequality"; Man…
2 comments
Read more 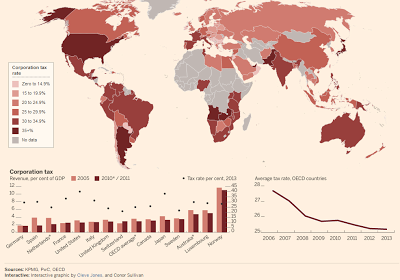 It is interesting to note that corporate tax rates have decreased on average by 3 percentage points in the last couple of years for the OECD countries. However the biggest decrease was done just before the onset of the crisis, by 2008. Afterwards corporate taxes slightly increased (due to an immediate response to the crisis) and have, on average, started to decrease slowly since 2010. Some would say this was evidence of austerity, at least the "good" type of austerity where taxes go down combined with spending cuts. However spending cuts in OECD economies were scarce, to say the least, while tax cuts were only applied to corporate taxes while personal income taxes, along with all other forms of taxes like VAT, shot up in some countries. As an effect personal consumption was hit hard, since prices were going up, while people were earning less.
International co…
1 comment
Read more 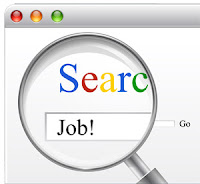 Looking at the supply side of the job market, several online exchanges have emerged attempting to link the demand and supply of workers more successfully across the globe. In particular, online job markets are an increasingly popular way to fight domestic monopolies (or overpriced services) by introducing global competition in the local market. The pool of offered jobs varies from web programming, mobile apps, translation, project management, design, media, to more than 35 different types of jobs. The most important implication is that one does not need to pay the local rate for the service, rather one can simply find the needed workers online and hire them at a much lower rate. The Economist has the story:  "...According to his Elance page, “oswaldo g”, from Colombia, has already completed 31 jobs, earning a combined $4,193 and a satisfaction rating of 4.9 (out of 5). He quoted a tempting $16.44 an hour—though not as tempting as the five bids on oDesk (three of them by five-star…
5 comments
Read more

Graph of the week: An influx of college degrees 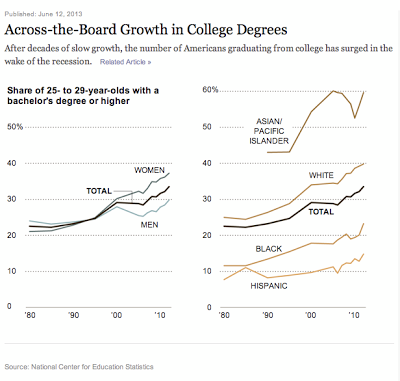 Over the past three decades the US has experienced a steady increase of College graduands. New York Times has the story:  "The increases appear to be driven both by a sharp rise in college enrollment and by an improvement among colleges in graduating students. The trends could bring good news in future years, economists say, as more Americans become qualified for higher-paying jobs as the economy recovers. College attendance has increased in the past decade partly because of the new types of jobs that have been created in the digital age, which have increased the wage gap between degree holders and everyone else. The recent recession, which pushed more workers of all ages to take shelter on college campuses while the job market was poor, has also played a role." I made this point several times before, most precisely in an article from January last year, entitled "Percentages and inequality: Where is the middle class?". The increase of the trend (most strongly) start…
3 comments
Read more 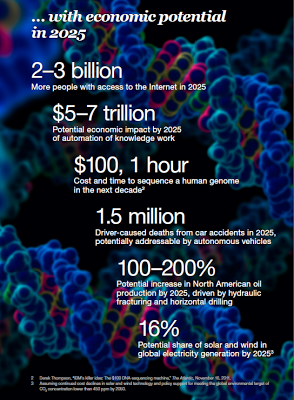 A new report from McKinsey Global Institute talks about the potential impact of new, disruptive technologies which are already being developed. They identify 12 technologies that are most likely to have the strongest impact on the global economy, with respect to their benefits and challenges:  "We estimate that, together, applications of the 12 technologies discussed in the report could have a potential economic impact between $14 trillion and $33 trillion a year in 2025. This estimate is neither predictive nor comprehensive. It is based on an in-depth analysis of key potential applications and the value they could create in a number of ways, including the consumer surplus that arises from better products, lower prices, a cleaner environment, and better health." The crucial point is that all of these technologies are already known to us. They aren't fictional or unimaginable, they already exist in early stages of development, and by estimating their rates of progress, on…
6 comments
Read more 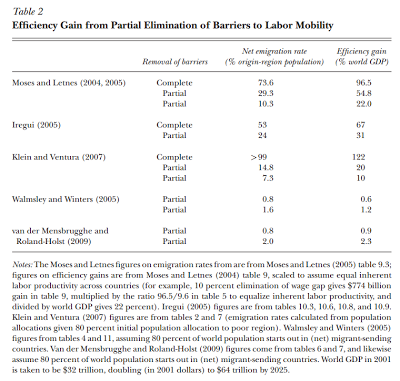 The immigration debate has been a long standing issue between economists and the general population. I have yet to encounter an economist who is against it, yet many in the general population fear it claiming that immigrants take away domestic jobs and/or social security benefits, in addition to lowering the average domestic wages (since they are prepared to work for less). In Bryan Caplan's excellent book "Myth of the Rational Voter" he stresses that the division of opinions on immigration is the largest between economists and non-economists (the second one is openness to trade, on similar principles really). Even though there exists a whole range of original research that has proven time and time again that immigration leads to better skills in the economy, more specialization, higher not lower wages, that immigrants tend to be more entrepreneurial than average, not to mention bring in more competition, I however feel that many in the population still fail to understa…
8 comments
Read more

How much would you pay for publication at the AER?

From the EJMR:  "I have a new paper that I consider my best work. For a variety of reasons, the marginal return professionally for this paper is very small for me. But I think it has an excellent shot a top journal, I would estimate 1/3 at the AER (I have published there before). So I am offering it for sale. Here are the details:  1. This paper is not yet posted on my website. It has not been circulated and I have not yet presented it.  2. The paper is applied micro although I will sell it to anyone.  3. Email bids to econpubforsale@hotmail.com. Use a fake account and make sure to send no revealing information.  4. Your bid is for an AER or QJE. If it ends in Restud, you pay 65%. If it ends in the Journal of Labor Economics, Journal of Public Economics, or EJ, you pay 35%. Other journals are negotiable. You can choose the submission path as long as it starts with one of the top journals.  5. I will contact the winning bid (or highest real bid) to arrange an in person meeting in…
1 comment
Read more
More posts