December 14, 2012
In an interview for Business Insider, the chief economist of Goldman Sachs, Jan Hatzius, predicts an acceleration of US economic growth in the second quarter of 2013. Business Insider points out that Mr Hatzius had the foresight to predict the housing boom in 2007 (so at least a year after Shiller, Roubini, Schiff and many others), and has a unique framework for analyzing the economy. After all, he is the top economist of Goldman Sachs which is by itself worth (some sort of) admiration.

He stressed out the following chart depicting the relationship between private sector savings and government budget deficits (click to enlarge):

Here's the logic behind it:

The key to understanding the economy, and forecasting growth, is to think about which sectors are increasing and decreasing their savings."

Basically, Hatzius predicts savings of the private sector to decrease and hence add up to around 1.5 percentage points to real GDP growth in the next year. Residential investments and housing are supposed to be the forefronts of this impulse.

This actually might prove to be true, since the indicator of new building permits seems to be recovering (as opposed to its previous value in February or July):

As I've pointed out earlier in the aforementioned months this indicator of economic activity is a good leading indicator (included in the LEI) that can offer precise insight on the point of recovery of the construction and housing market.

Even residential and non-residential investments are showing slightly better results than in the previous three years: 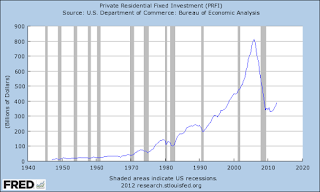 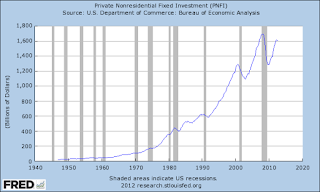 All this could point out to a gradual and 'careful' recovery of the housing market and the construction industry and could justify the confidence of Goldman Sachs's economists on the start of a strong recovery, at least in those two sectors which are supposed to be the drivers of GDP growth next year.

However all of this is subject to not having the US "fall off the fiscal cliff" and not having the politicians in Washington trigger another global downturn (as it almost happened after August 2011).

Going back to the balance sheets, Mr Hatzius has this to say:

"Basically, in order to have above-trend growth – a cyclically strong economy – you need to have some sector that wants to reduce its financial surplus or run a larger deficit in order to provide that sort of cyclical boost, most of the time."

So basically, reducing a financial surplus (households pushing savings) or running large deficits (governments or households financing consumption) will result in a temporary (or a decade-long) boom on the market. This can coincide well with Bernanke's famous global savings glut story where financial surpluses from Asian households and governments were translated into investments and consumption in the West. The analogous story can be told in Europe, and the 'interaction' between the savings in the "core" and the deficits in the "periphery".