December 06, 2013
Flying back home from my honeymoon, I had to catch a connecting flight in Istanbul where at the airport I noticed a very interesting billboard. Here's what it said:

These are just some of the many benefits the "Invest in Macedonia" campaign is promoting. They offer a 10% personal and corporate income tax rate, an 18% VAT (lower than anywhere else in Europe with the exception of Luxembourg's 15%), and a series of low property, sales, and inheritance taxes declaring themselves the new business heaven in Europe. The 650 million customer outreach is based on trade agreements Macedonia has with the EU, CEFTA and EFTA plus two bilateral free trade agreements with Ukraine and Turkey. It has set up a One-Stop-Shop that enables registering a company for only 4 hours (realistically 1-2 days), thus tackling all sorts of administrative barriers for starting a business. 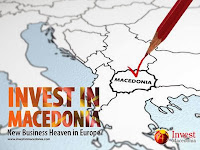 The Doing Business Report has singled them out as the 4th biggest reformer in 2008, particularly in terms of starting a business, dealing with licences, and paying taxes. Five years later, they are still more than impressive in the individual categories of the Report: they are ranked 7th in the world for starting a business and an incredible 3rd in getting credit. They are showing persistent progress in dealing with construction permits, getting electricity, registering property, protecting investors and resolving insolvency. Overall they are ranked 25th in the 2014 Report (up from 36th in the 2013 Report) - ranked higher than Japan, Netherlands, Austria, Portugal, Chile, Israel, France, Belgium, Poland, etc.

Why does Macedonia need to offer a package such as this one to attract foreign investment? Simple; to gain competitiveness.


As a small economy it's only chance to achieve economic progress is to be a very open economy with a highly competitive tax system. As a transitional economy it suffers from a relatively weak institutional environment, which is exactly where one needs to start reforming if you want to achieve growth. And Macedonia did just that. It improved its institutional efficiency and designed a set of policies and laws that attract capital. It attracted foreign companies with low tax rates (both corporate and income) and a cheep yet skilled workforce, and when they've caught their attention they made it very easy for an investor to purchase property and open a business.


Countries with a relatively stronger and safer institutional environment can afford to set higher tax rates, have higher labour costs and put relatively more restrictions on buying property. The institutional and macroeconomic stability of these countries ensures that they don't need to compete with low tax rates, and that despite their administrative inefficiencies many entrepreneurs will still picture them as business heavens.

As I've stated in my earlier post "Doing business" despite all the problems the UK business owners face and constantly complain about, the UK is still far more attractive for starting up companies than any other European country. This is all due to the relative strength of UK's domestic institutions and the fact that London is a financial center of the world. UK's institutional stability is the biggest pulling factor for investors. The same thing is true for USA or Japan which have the world's highest corporate tax rates (40% and 38%), but which still, despite this fact, attract investments and see a lot of new businesses open up every year. Scandinavian countries, well known for their high taxation and government spending, offer a prosperous wealth generating environment for investors. Their governments are among the most efficient ones in providing public goods and promoting a stable environment free of corruption and expropriation. In Scandinavia, size doesn't matter, it's all about efficiency.

However countries with inefficient and large governments, with constraining bureaucratic procedures, corruption and rent-seeking interest groups must first tackle these issues in order to achieve international competitiveness. Basically, there are two equilibria - one for the rich (OECD) economies, who have already achieved institutional stability and inclusinvess and thus operate at a higher level of economic progress, and the second, lower equilibrium for the developing economies who need to grow quickly to catch up (converge) to the rich economies (higher equilibrium). In order to do so they need to adopt a set of policies similar to the one done by Macedonia which will free their business activity and gradually reform their institutional environment.

Macedonia is just one positive example. There are nations even more impressive than Macedonia in terms of attracting capital - Georgia is ranked #1 in the world for registering property, #2 for dealing with construction permits, #3 in getting credit and #8 in starting a business. It's ranked 8th in the overall table (it's worst results are in getting electricity and resolving insolvency), which is higher than the United Kingdom and all the Scandinavian countries except for Denmark. And even bigger success is Malaysia (6th overall), while Mauritius is also impressive closing the top 20 group of countries.

Countries that fail to take this approach will remain stuck in a lower equilibrium for a long time.
Business Institutions Political economy Regulation Taxing