What happened to our dream of democracy? Part 1: Ukrainian revolution

March 01, 2014
Ukraine has been the center of worldwide attention in the past weeks (and still is), following a long run of anti-government protests. The protests started as a peaceful rally back in November 2013 to end Russia's influence over Ukraine (the trigger was the Ukrainian President Yanukovich's refusal to sign a free trade agreement with the EU and chose Russia's help instead). The initial student protesters were calling for a more EU-oriented Ukraine. In essence one can say these protesters were fighting FOR democracy, or to be even more precise for a BETTER democracy.

This isn't the full story around Ukraine however. Lots of things went out of hand particularly last month and even though some kept their initial goals of a pro-European Ukraine, many other, darker things also surfaced. And interestingly enough, Ukraine has been one of the prime examples of a split-country. The political science terminology often uses the term Two Ukraines, similar to the story of Two Polands. This divide is, however, geographical even more than ideological (see map). 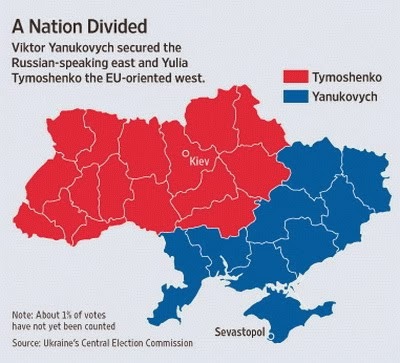 It's not to hard to imagine that in Ukraine there's a lot of people who are pro-Russian as well as those who are pro-European. Many don't share the image of the EU being the convergence machine it was designed to be. They don't consider a democracy to be the best system out there. Recall an earlier text of mine on European values and see for yourself the split in Ukraine over the perception of democracy. Furthermore, issues such as having a strong, authoritarian leader and high state involvement in the economy are reasons for concern in the Ukraine over what kind of a system they are hoping to ensure. Obviously the western pattern of a democracy doesn't fit into the optimal scenario. Why so pessimistic? Simple, this already happened in Ukraine during the Orange revolution in 2004 when the people went to the streets to oust Yanukovich, only to re-elect him back into office in 2010. Things are different now, say many, and I agree. Yanukovich certainly won't be heading back into office ever again. However looking at the pattern of protests in autocratic or semi-autocratic regimes it's hard to see how things might improve.


Look at the failed attempts of Egypt's democratic consolidation? Or the entire Arab spring for that matter. Many countries look to achieve the Western type of a democracy, but these things take time. A lot more time than the current voters are prepared to wait for. Which is exactly why the initial democratic consolidation is so fragile and often ends in disarray (more on this in the forthcoming texts).

The iron law of oligarchy


The bottom line is that autocratic or semi-autocratic regimes get replaced first by anarchy and then by a woeful inability to consolidate the young democracy. According to Acemoglu and Robinson this reeks of a typical 'iron law of oligarchy' - where one tyranny is simply being replaced by another.


Democratic consolidations fail when they fail to create institutions to limit political power. Protests and revolutions are a natural reaction to years of extractive institutions in which the ruling elites had no or little constrains on their power. In other words they had strong incentives of expropriation and wealth extraction. An elite overthrown by a revolution is replaced by a new one often continuing to cause even worse havoc than before thus strengthening the iron law of oligarchy. Countries such as Sierra Leone, Guatemala, Ethiopia, Zimbabwe, Uzbekistan, Columbia, Argentina, Egypt all seemed to be trapped by this perpetuating negative feedback loop. It's happening to Ukraine as well.

The fragility of a young democracy


A great recent essay in the Economist on the problems facing democracies holds a cautious view; on one hand, Western democracies (most of them) suffer from rising inequality, high debt levels and problems of dysfunctionality, while on the other hand in the developing world it's getting harder and harder to consolidate them. This all further adds to the problem of democracy's fragility as a system.


In one point the critics are right - democracies do seem fragile and unsustainable, particularly in the developing world. Which is exactly the reason why a strong democracy needs strong institutions. Institutions that limit the extractive political and corporate power and ensure a functioning rule of law and constitutional order. This is much easier said than done. It's hard to ask for limiting political and crony power when those who hold on to power are the only ones able to change it. This leads to a paradox - a democracy, the so-called rule of the people, is unable to take power away from those who hold it. The principles (voters) are unable to control their agents (politicians). Sometimes this goes too far and the result is a revolution which overthrows the current ruling elite. But institutions are still weak, so it's easy for the new group to rise to power and again maintain a firm hold over it, implying that the democratic system has failed. Think again of Ukraine. They overthrew Yanukovich during the Orange revolution in 2004 - a good example of democracy at work (even though Yanukovich refused to step down after electoral defeat - hence the revolution). Yushchenko, the new President promised a lot but delivered very little, so he too was ousted (punished) in the next elections (he got around 5% of the vote in the 2010 elections) - another good example of the democratic process at work. In this democratic process Yanukovich won again (narrowly against Yulia Tymoshenko, and with many accusations of fraud in the run-off elections). In the aftermath, Yanukovich imprisoned his main opponent Tymoshenko on charges on corruption and embezzlement (she was released last month mainly thanks to the pressure from the protesters). And this is perhaps the key issue with democracies - very often controversial candidates can secure their firm hold on power riding on a legitimate electoral process. The elections don't even have to be rigged (just look at Erdogan in Turkey). All it takes is to build a big enough, faithful, support group (or groups) to whom you need to keep giving and promising concessions. A great new book from Bueno de Mesquita and Smith "The Dictator's Handbook" provides the full story. The problem is self-perpetuating and it is easy to see how young democracies find it very hard to set up a proper set of institutions. Economic theory says such democracies suffer from state capture.


In the following texts I will look at some of the more in depth reasons of why democracies are loosing their allure.
Corruption Crony Capitalism Democracy Development Economic Freedom Institutions Political economy