August 05, 2014
In my previous blog post I called upon some of the evidence from a very interesting website called Human Progress. Once you go to their website the first thing that welcomes you is the sentence from the title. So let's look at the evidence to evaluate is this really so:


Before you do, have in mind that I'm looking at aggregate numbers and trends of some of the main development indicators of human progress in (mostly) developing nations.

Looking at the four chosen regions, all of them are experiencing a decline in the headcount of people living below $1.25 a day (adjusted for inflation and PPP, and in relative terms). This is particularly obvious for East Asia (the orange line), and in general for all low and middle income countries (light blue line). Even though this hardly suggests that their living standards are now better, the process of globalization and rapid growth of international trade in the past 30 years has indeed made people in poorer countries better off (as expected).
Globalization (Trade) 1 : Protectionism 0

2. More food is being consumed in the poorer countries (and worldwide)


The US Food and Drug Administration recommends an average person should eat at least 2000 calories each day. For an increasing number of people this is now a reality as compared to only 20 years ago. In 2008 in only eight countries people on average eat less than 2000 calories (Angola, Burundi, Central African Republic, Comoros, Eritrea, Ethiopia, Haiti, Zambia; between 1600 to 1960), however almost all countries in the sample feature a positive trend, where people have more food at their disposal today than 20 years ago.
Globalization (Trade) 2 : Protectionism 0


"According to Gabriel Demombynes and Karina Trommlerova of the World Bank, 16 of the 20 African countries which have had detailed surveys of living conditions since 2005 reported falls in their child mortality rates (this rate is the number of deaths of children under the age of 5 per 1,000 live births). Twelve had falls of over 4.4 percent a year, which is the rate of decline that is needed to meet the millennium development goal (MDG) of cutting by two-thirds the child mortality rate between 1990 and 2015. Three countries--Senegal, Rwanda and Kenya--have seen falls of more than 8 percent a year, almost twice the MDG rate and enough to halve child mortality in about a decade."

Lower infant mortality suggests improvements in health and basic medical care, which suggest rising living standards for most of the developing world. Even though most of these developing countries are still far from decent health standards, the trend is certainly positive as it improves the human capital of most of these countries (and hence creates a better chance for achieving economic growth). Better health standards can also be attributed to countries opening up to trade and flow of goods.
Globalization (Trade) 3 : Protectionism 0

This suggests of a trend where leisure is becoming increasingly more important in the age of consumerism. It's not just about earning money, it's about spending it on an abundance of goods.
Globalization (Trade) 4 : Protectionism 0

Arguably the best indicator of human progress is life expectancy. Are we living longer, i.e. have our living standards improved so as to make us more robust to injuries and illnesses. This also improves the quality (and arguably quantity) of human capital, which is the necessary presumption for robust economic growth. Looking at some of the poorest nations, the improvement is significant: from below 40 in the 1960s (btw, this is a very similar life expectancy as in ancient hunter-gatherer societies), to around 55 today. Notice the huge increase for East Asian countries in the 60-ies followed by Middle East and North Africa in the 80-ies (which could also arguably be attributed to their opening up to international trade, particularly for the later group in oil exports). The lowest income countries still haven't experienced the upward bump in living standards, but have gradually followed the trends of higher life expectancy. As their economies start trading more, standards will rise.
Globalization (Trade) 5 : Protectionism 0

This indicator suggests that countries are becoming more aware of the pollution issue. However as the West is decreasing its pollution, the newly industrialized Asian countries have increased it over the past decade.
The scoreline is unclear in this one (does globalization lead to more pollution, if so, shouldn't the rich countries pollute more? Or is this an effect of anti-pollution regulation?) 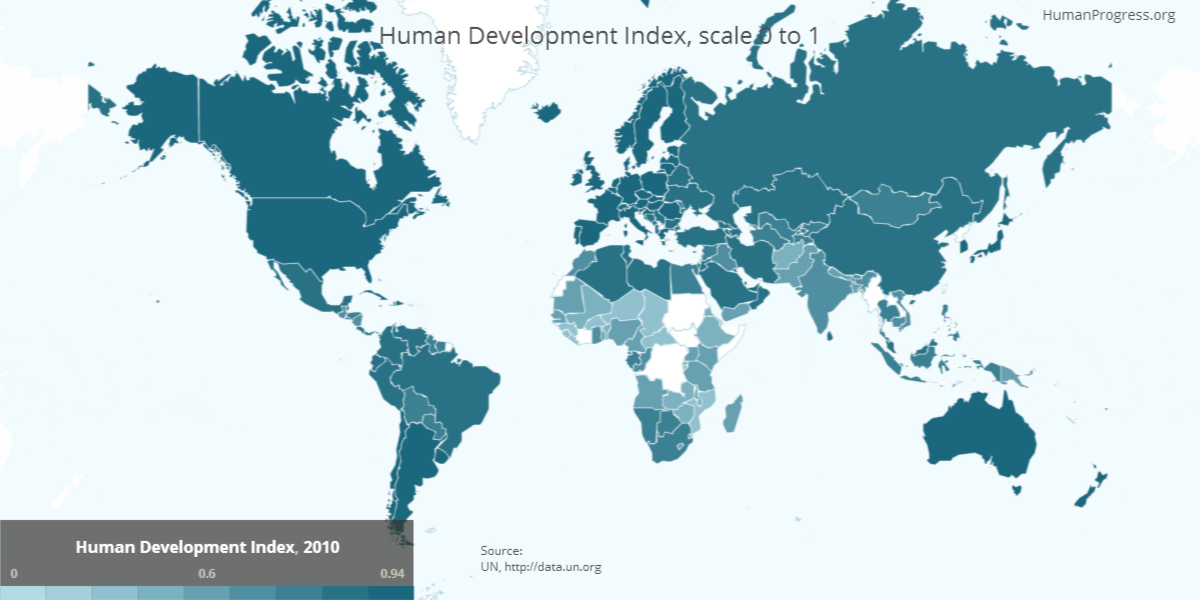 Apart from these, the Human Progress website offers a number of other indicators confirming the pattern of this story. Literacy rates are rising significantly in the poorer regions, as are health standards and the availability of water supply. Disposable income of the population is higher than 40 years ago, less people live in slums, and more energy is being consumed. People are travelling more, visiting more places, the transportation infrastructure has improved and is connecting more people, internet and mobile phone users are growing rapidly, while, as reported before, violence in all forms is dropping. The only thing that could be improved is good governance, in terms of corruption, rule of law, civil liberties and press freedom. However with globalization leading to drastic changes in information availability and living standards over the decades, this will be the key factor for inclusive economic institutions to destabilize the politically extractive ones and overrule the dictators and the sovereigns, thus freeing their populations from the poverty trap. Progress, in the upcoming age of informational abundance, cannot be halted by anyone.
Development Economic Freedom Graph of the Week Institutions Trade