October 14, 2014
It's that time of the year again - the Nobel prize announcements. As always, the last in line is the Sveriges Riksbank Prize in Economic Sciences in Memory of Albert Nobel, or colloquially the Nobel prize in economics, awarded yesterday. This year the honorary recipient was Professor Jean Tirole from Toulouse, France, one of the most cited economists in the World. He is only the third Frenchmen to receive the prize, first one since Maurice Allais in 1988. In addition, this ended an almost 15 year domination of US-based economists (at least one recipient each year was a US-based economist - they still dominate the field, as in every other science btw). Also he's one of the rare economists who got the honor as a single recipient (which became particularly rare in the past 15-20 years). 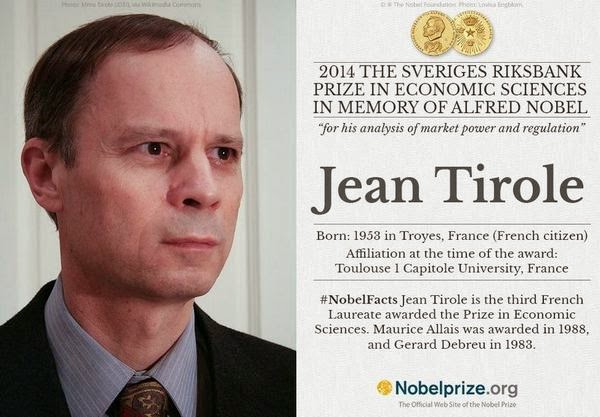 The award was given for his contributions in the "analysis of market power and regulation". Basically Tirole studied monopolies and oligopolies (since most industries are actually dominated by a few big firms), and how to regulate them to produce more socially-optimal outcomes.

Here's a paragraph from the Nobel committee:


His analysis of firms with market power provides a unified theory with a strong bearing on central policy questions: how should the government deal with mergers or cartels, and how should it regulate monopolies? 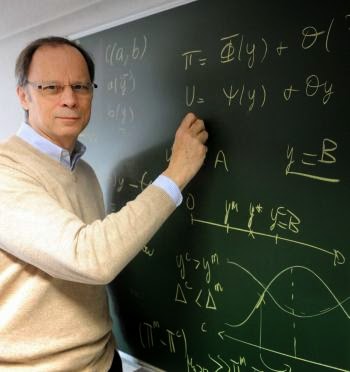 Before Tirole, researchers and policymakers sought general principles for all industries. They advocated simple policy rules, such as capping prices for monopolists and prohibiting cooperation between competitors, while permitting cooperation between firms with different positions in the value chain. Tirole showed theoretically that such rules may work well in certain conditions, but do more harm than good in others. Price caps can provide dominant firms with strong motives to reduce costs – a good thing for society – but may also permit excessive profits – a bad thing for society. Cooperation on price setting within a market is usually harmful, but cooperation regarding patent pools can benefit everyone. The merger of a firm and its supplier may encourage innovation, but may also distort competition.


The best regulation or competition policy should therefore be carefully adapted to every industry’s specific conditions. In a series of articles and books, Jean Tirole has presented a general framework for designing such policies and applied it to a number of industries, ranging from telecommunications to banking. Drawing on these new insights, governments can better encourage powerful firms to become more productive and, at the same time, prevent them from harming competitors and customers.


All in all, a well deserved prize for Professor Tirole. Personally, I'm mostly familiar with his contributions to game theory (the textbook he and Drew Fundenberg wrote on game theory is a state-of-the-art piece of work, I recommend it to any PhD student). However his biggest contributions are, obviously, in the field of market regulation (where he also has a very influential textbook: "The Theory of Industrial Organization"). Even though, as Tyler Cowen noted, his research extends to a variety of fields, and he is particularly good in formalizing propositions and assumptions, and in mechanism design. Since his papers and their results are usually very complex, he hasn't been particularly present in the media, despite his ideas significantly influencing public policy. For example, here is an old text of his from 2007 published at VoxEU called "Four principles for an effective state". Read it, it's excellent and ever more applicable in today's situation. He advocates restructuring, competition, evaluation and accountability in order to turn big, useless states into efficient ones focused on the quality of the public service they offer. It's all very clear and straightforward. And yes, even in 2007 Tirole called for reforms. What does that tell you?

The contributions he has made in industrial organization theory are particularly important in terms of understanding how 'imperfect' markets work. We are surrounded by such imperfect markets, suffering from asymmetric information and monopoly and oligopoly power (this means that one big firm or a group of big firms dominate the market - there are so many industries today where this is a fact: from the automobile, telecommunications, energy, to even some aspects of finance and even some fast consumer goods). For regulators it is often very hard to evaluate all the details of the firms, particularly in terms of costs and benefits of improving quality of the offered product or service. The regulators, just as consumers, also tend to suffer from an asymmetry of information, since firms between themselves enter into a variety of games and interactions, all which would be far too complex to model and particularly to regulate and supervise. Tirole and his range of co-authors have used game theory and contract theory to explain how particular tools can be used to overcome these difficulties. The scope of his contributions is thus monumental for industrial policy and the market failure problems in general. He helps us understand how one can avoid both market and government failures in producing an optimal outcome for societies.


Finally, have a look at some reactions and comments from notable economists: Tyler Cowen has a great post celebrating Tirole's achievements, so does Alex Tabarrok at the same blog, The Economist offers a series of links where they touched upon some of his ideas, the WSJ blog explains who he is and why he deserves it (my former LSE professor Torsten Persson explains it in an interview), Mark Thoma provided a series of other links, etc.