March 01, 2015
It's been a rough few weeks, but Europe and Greece have finally reached an agreement. Or to be more precise, the Greeks have caved in to the demands of the financial markets, just as I predicted they would in my last blog post. Again, I hate to blow my own horn (but let's be honest, I need to); I was right once again in predicting the outcome in Greece. This aligns well with my track record of being correct on Greece in 2011, 2012, 2013 and, well, 2015. Just saying.


So what was in the new deal? In a nutshell here is what the Greek government has pledged to do in return for the extension of the Eurogroup bailout program (much needed to maintain solvency of the Greek government):
A more detailed list, with some measures not mentioned above, is available here in a letter from Varoufakis and summed-up here.

All of these sound really good actually. And very, very far from something a left-wing government would propose (which isn't too surprising). Christine Lagarde of the IMF even calls them "too optimistic". Even if this is true and even if it does take a long time for some of these measures to take effect (such as the new culture of tax compliance), there is no doubt this is exactly the reform package Greece needs. Too bad it didn't start doing it back in 2011.

Europe (read Germany) accepted the plan and extended the bailout deal for another four months. How did the Greek voters react? Violently, as usual. At least those voters who felt betrayed. Which is, again, exactly what I predicted would happen: Tsipras will follow the rules of the financial markets, which his voters will interpret as a betrayal and a renege of his campaign promises (at least on the promises he made in the beginning of the campaign). Luckily once you come to power and face the consequences you start realizing reality, even though the same cannot be expected of your voters.

The most interesting reform proposal is surely the one on clamping down tax evasion. A welcomed policy indeed. But the number I stated earlier (30bn euros) doesn't even begin to describe the extent of this problem.

First off, just take a quick look at the picture below: 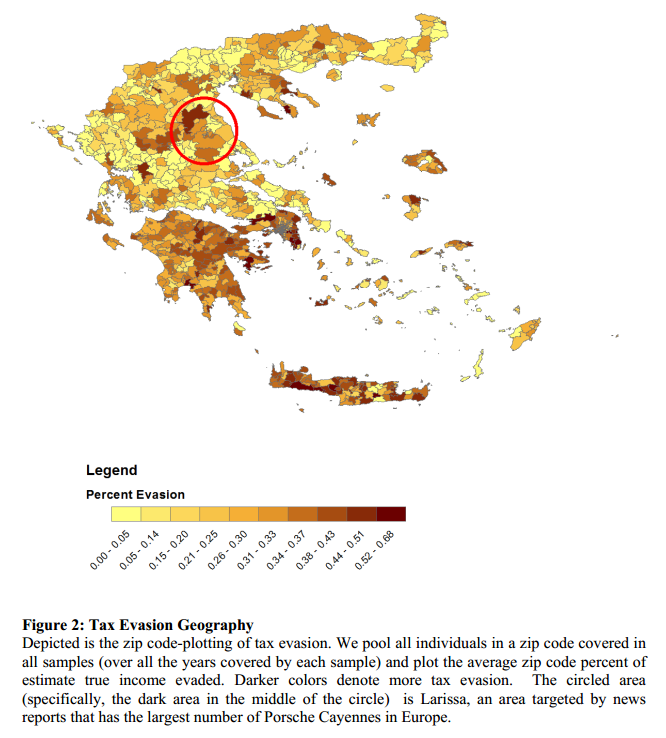 The source is this great paper from Artavanis, Morse and Tsoutsoura on tax evasion in Greece. Their main finding is that contrary to popular belief that only the super-rich are avoiding to pay their taxes, it is actually the middle classes (the upper middle classes to be precise) which are dodging their taxes. This makes a lot of sense, as 30bn euros is too much to link it only to the super rich. The problem must be more widespread. And it is. Basically across the Greek society. In the map above, you can see that tax evasion is even almost evenly distributed geographically (I don't know too much about Greece to comment on the geographical heterogeneity; there must be a reason why the Peloponnese peninsula, the greater Athens area and the island of Crete have the highest number of tax evaders). But the interesting area is the one circled. As the authors note, this is Larissa, "an area...that has the largest number of Porsche Cayennes in Europe". Talk about feeling sorry for the middle classes, huh?

The authors note that the primary tax evaders in Greece are doctors, engineers, private tutors, accountants, financial service agents and lawyers. Not surprising is it? But more problematic is this: "Testing the industry distribution against a number of redistribution and incentive theories, our evidence suggests that industries with low paper trail and industries supported by parliamentarians have more tax evasion."


"On average, self-employed Greeks spend 82% of their monthly reported income servicing debt. To put this number in perspective, the standard practice in consumer finance (in the United States as well as Greece) is to never lend to borrowers such that loan payments are greater than 30% of monthly income. ...

... Take the examples of lawyers, doctors, financial services, and accountants. In all of these occupations, the self-employed are paying over 100% of their reported income flows to debt servicing on consumer loans."

As you might have figured it out this doesn't mean that the Greeks in all these occupations spend their entire income on servicing debts, but that their incomes are massively underreported.

As I've said countless times before, the Greek problem really is systemic. There is nothing ideological about it. Which is why ideology has to be removed when designing the remedies for Greece. In the current reform plan this seems to be the case, more or less. Let's hope they stick to it.
Austerity Bailout Debt Eurozone Financial Crisis Greece Taxing