October 10, 2016
It's that time of the year again - Nobel prize awards! After being awarded to a single recipient two years in a row (Deaton in 2015, Tirole in 2014), this year the Nobel in economics is shared by two worthy winners, both relatively unknown outside the economic arena. The reason is that both Oliver Hart from Harvard, and Bengt Holmstrom from MIT, are theorists. What is their area of expertise? Contract theory, arguably the most complex field in modern economics. Which is why this year's prize is another laudable effort to commemorate this very important branch of economic theory for the very first time. 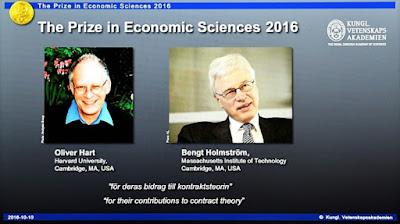 So what's contract theory all about? Or to be more precise, what was the significance in their contribution? The official statement says the following: "Modern economies are held together by innumerable contracts. The new theoretical tools created by Hart and Holmström are valuable to the understanding of real-life contracts and institutions, as well as potential pitfalls in contract design ... This year’s laureates have developed contract theory, a comprehensive framework for analysing many diverse issues in contractual design, like performance-based pay for top executives, deductibles and co-pays in insurance, and the privatisation of public-sector activities."

Read a more detailed (layman) explanation here, and a more complex, theoretical one here. Also, here is a good text from Tyler Cowen.


In a nutshell, contract theory studies how, in the presence of asymmetric information (adverse selection, moral hazard, signaling, etc.) do economic agents enter into contractual obligations. How do they create a mutually beneficial deal, that will incentivize both parties to keep their part of the bargain. Theorists examining contract theory try to find the optimal arrangement that will motivate agents to keep their commitment, even when entering the obligation with a veil of uncertainty. In other words, it's a utility maximization exercise, with time discounting and asymmetric information acting as the constraints. Examples of contractual relationships can vary from managers and shareholders, insurance companies and their clients, a firm and its suppliers, or between lenders and borrowers.

The crucial part in designing an optimal contract structure is the satisfaction of divergent interests. In other words the contractual relationship must be thought of as mutually beneficial, otherwise no one would enter into one. It's a principal-agent game, to be more precise.  The issue is that the principal does not have perfect information on whether the agent is keeping to his side of the deal. A multitude of principal-agent examples have been researched in microeconomics, including labour economics, and political economy, and have mostly been modeled using game theory. One of the most famous principal-agent examples is the labour market: how does the principal (the employer) make sure that the agent (the worker) is not shirking? In a world of limited information the principal can never be too sure in whether or not the agent is performing his job as contractually obliged. In politics, the principals are the voters (the public), whereas the agents are the politicians. The voters "hire" politicians to do the job of running the country, but have very limited oversight into what the politicians are actually doing (notice that in dictatorships it is the dictator who is the principal, since he is accountable to no one). The example that Holmstrom used is the relationship between a company's shareholders (principal) and its CEO (agent) - how do the shareholders make the CEO maximize shareholder value instead of just their own compensation?

Contract theory goes one step beyond modelling the pure principal-agent game. It is concerned with designing the optimal contractual structure to make sure that both parties benefit from the relationship and that neither has an incentive to shirk. It's all a question of risks vs incentives - which incentives will you offer the agent and at what cost? Examples include everything from performance-based pay structures to the extent of bonuses and stock options given to managers. The other important part, done by Hart, was to distinguish between complete and incomplete contracts, where the former are a theoretical construct, while the later are applicable to realistic settings, where the parties are unable to precisely articulate all the details ex ante. In particular, incomplete contracts are aware of the informational asymmetry and are concerned with the optimal allocation of control rights - which party should be given the decision rights (and how to compensate the other party), or should the decision rights be given to a third party?

Needless to say the real-life application of these theoretical findings are primarily embedded in law (corporate law to be exact), particularly in the cases of property ownership, control rights, mergers and acquisitions, bankruptcy legislation, financial contracts, etc. This also means that their application is important for designing policy - the optimal bankruptcy laws, or property rights, and even privatization (how to strike a balance between cost reduction and quality).

All in all, a welcomed award to a fascinating field of research. All the more so given that it was the recipients who designed this theoretical framework for others to build on. Congratulations to Hart and Holmstrom!
Economic theory Nobel prize