Showing posts from October, 2011
Show All

Regulatory omissions - the paradox of an oversight body

October 30, 2011
Note: this blog post was also published at the Adam Smith Institute blog titled: "The paradox of regulation" Apart from the policymakers in the EU summit, the regulators across Europe are designing their reform proposals on how to improve the financial system and make it more robust to future crises. One of the main proposals on banking regulations in Europe is done by the Basel Committee on Banking Supervision . In addition to Basel I and Basel II, the previous banking reforms that substantially influenced the changes in banking regulation worldwide (I briefly touch upon the Basel Accords in my paper on the crisis ) the new proposal, Basel III goes a step further. It is seen as a comprehensive response of the Basel Committee to the financial crisis of 2007-2009.   The Basel III agenda  is based around three key elements aimed at making banks more resilient to future instabilities. Banks need to have core tier one capital equal to 7% of their risk-weighted assets; top “s
Post a Comment
Read more

Eurozone regulatory responses – or, How the policymakers are steering us into another depression

October 28, 2011
Well, all my hopes were in vain. The decision of the policymakers is obviously to destroy lending on the European market and consequently any hope of a recovery any time soon. The European leaders decided in the early morning hours on Thursday to let private investors (mostly EU banks) to take a 50% cut in theface value of their bond holdings – something that would reduce the Greek debt to 120% of GDP by the end of 2020, combined with a 130bn more for bailout of Greece by the EU and the IMF. What a strategy! This is how I would sum it up: let’s destroy the banking system and freeze lending in Europe again (and possibly endanger every other strong economy in the World) in order to keep Greece on life support just a bit longer, and offer them a huge relief – they will decrease their debt to only 120% of GDP by 2020 (!?), more than any eurozone economy (and any world economy besides Japan) has at the moment. Maybe they should have all rather had a good night sleep instead.  Let’s
4 comments
Read more 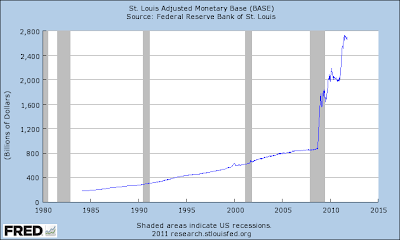 There is a lot of money in the world economy currently (rising monetary bases worldwide, quantitative easing, declining interest rates – see Graph and Table below - click to get a better view). However, none of the newly created money has had any effect on restoring confidence or economic growth. The investors are in a lock-down, they invest into safe assets with low yields which is a typical sign of an uncertain environment. What is there to be done in order to unblock the money holdings of banks and institutional investors and make them move it into undervalued assets and equities? Once the investors start investing, money will start flowing into the economy – the government can only do so much to try and create incentives for an upsurge in demand, but so far, their efforts remain futile. Only an increase in confidence and reducing of uncertainty will work towards releasing the vastly created money into the system. Once banks and high profile investors feel safe enough to start i
7 comments
Read more

October 22, 2011
Last few weeks saw a decline in banking shares throughout the markets, huge uncertainty regarding political responses on whether to recapitalize the banks and set higher capital standards, the privatization of another bank highly exposed to peripheral eurozone debt Dexia, and further questions on what to do with the eurozone system – to resolve the issues by boosting cash reserves of the EFSF, by higher political integration or something else. Fears are rising concerning the possibility of a Greek default to bring down with it Italy, Spain and Portugal as well as sovereign debt infected European banks. All the countries in the EU could be exposed, if not directly via common currency or through losses of domestic banks and another credit squeeze, then indirectly through declining trade and a severe blow on confidence. The financial linkages would spread quickly worldwide, just as they did after the fall of Lehman Brothers in 2008. Read about the effects of the euro break up worldwide i
5 comments
Read more

October 19, 2011
The debate around the eurozone problems is reaching new levels. As of yesterday there is a prize assigned for any economist that is capable of creating a painless scenario for the demise of the euro and the eurozone . The prize is named after its sponsor Lord Wolfson, chief executive of Next, and it presents the second largest prize in economics after the Nobel Prize, a total of £250,000. What an incentive! The conditions and more details on the prize can be found here .
1 comment
Read more 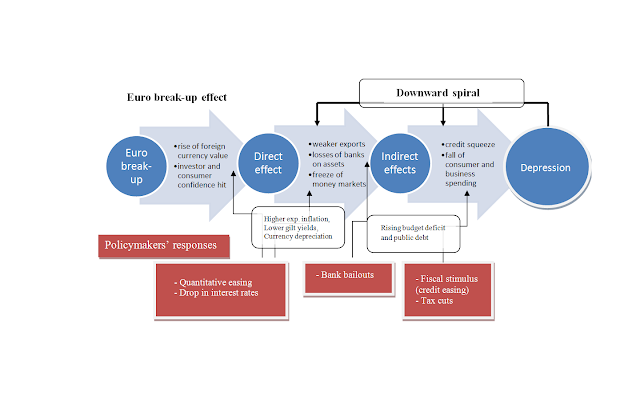 During the past few weeks the centre of economic discussion worldwide has been the Greek default issue, the euro break-up and numerous possible solutions to this problem. Today, I begin with a series of comments on the eurozone crisis and its possible remedies and consequences. I will start backwards with the worst case scenario – what if the euro falls? What are the possible consequences to the world economy? Inspired by an interesting article from the Financial Times  that looked at consequences of a euro break-up on the UK, I use a similar method to paint the global causal effect picture. A euro break-up won’t only create adverse effects to the eurozone economies; it will yield a significant spillover effect to any countries with strong trade ties with the eurozone. Negative trade linkages will present the direct impact while financial ties and loss of confidence will present an even stronger indirect impact to the world economies. The first effect is a decrease of exports to any co
2 comments
Read more

October 17, 2011
Note: this blog post was also published at the Adam Smith Institute blog titled: " Credit easing won't deliver growth " Upon observing gloomy reports on the UK economic growth figures last month, panic spread through Westminster. The conservatives in power are getting anxious and cannot seem to wait until their long term growth plan starts yielding its first results. Due to public pressure the governing politicians wan't to see growth rising immediately, i.e. they wish to see their reforms yield results now, as their popularity is decreasing at approximately the same rate the unemployment levels are increasing. The latest action proposal, besides quantitative easing, has been a call for credit easing.  Credit easing implies that instead of a central bank, the government should buy corporate bonds from small and medium-sized businesses and therefore provide them with enough money so that they can start investing and hiring again. It is supposed to be a swift way to
Post a Comment
Read more

October 14, 2011
The European Commission has recently proposed a levy on financial transactions, as little as 0.1% for equities and bonds and 0.01% for derivatives. Both parties of the transaction would be entitled to it even for transactions where one trader would be out of EU. It is estimated that the tax could raise about 55bn euro a year for the EU. The idea behind it according to Jose Manuel Barosso: “it is time for the financial sector to make a contribution back to society”. However, the very same Commission has estimated that such a tax could severely harm derivatives and bond trading in Europe (up to 90% of derivatives trading will disappear) and cause a 2% decrease on average of the European GDP in the long run. The tax is named after a Nobel Prize winning US economist James Tobin who proposed the tax with the idea of an efficient and fair way of raising revenue for the government. In theory the tax is supposed to discourage speculation. In practice, however, it is unlikely to persist. The ma
Post a Comment
Read more 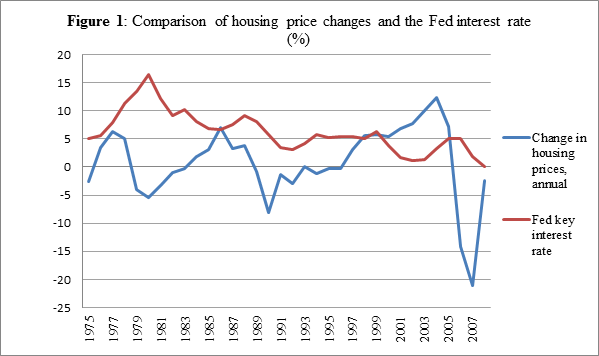 Last week the Bank of England issued another £75bn of quantitative easing (QE) in addition to the £200bn in 2009. Quantitative easing essentially means buying government bonds with newly printed money to drive down long-term interest rates due to the inability to lower the interest rates in a conventional way. A central bank creates incentives for the bankers to loan money to businesses instead of buying treasury bonds as the yield on the bonds goes down. The central bank also buys bad assets from banks to clear their balance sheets and decrease their borrowing costs. The immediate effects are devaluation of the national currency, lower gilt yields and higher inflationary expectations.  It appears that QE became a simple solution for politicians to try and quick fix the economy, while bearing no responsibility if it doesn't work. Central banks are pumping money into the economy at every sight of a growth slowdown. Their hope is that by buying government bonds and clearing banks’
Post a Comment
Read more

October 14, 2011
I will open the blog with a regulatory topic - the ICB banking reform in the UK and its effects on competitiveness, growth and recovery of the UK economy. In September 2011 the UK Independent Commission on Banking (ICB) announced its proposal of a banking reform that was to transform the British banking system and make it less vulnerable to outside shocks of liquidity and more responsive in their risk-taking behaviour. The initial concern that drove to the setting up of the ICB in 2010 was the notion that Britain will never again uphold a system in which a financial institution is considered too big to fail and that never again will the government have to bailout large banks at the taxpayers’ expense. The very essence of the Commission was to design a regulation that will reduce the likelihood of failure of important financial institutions and mitigate the effects on the economy of their possible defaults. The Commission was also supposed to tackle the problems of reducing systemic
Post a Comment
Read more

October 14, 2011
I would like to extend my welcome to any viewer on this blog. Through this blog you are entering the interesting world of economics. I hope you find my posts thought provoking or just interesting enough to leave a comment. The blog will mostly be about economics and political economy and will cover the issues regarding Western economies and when necessary certain Asian and Latin American countries. Topics will range from macroeconomic issues such as the current crisis and recovery and its regulatory responses, monetary policy, fiscal policy and a range of political economy issues. I do hope you enjoy the blog.
Post a Comment
Read more