Showing posts from June, 2012
Show All

Sweden - a cherry on top 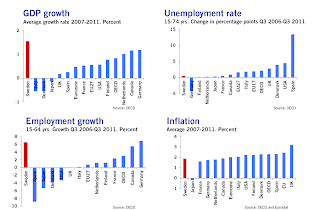 The final chapter of the cross-country coverage of successful (and not so successful) recoveries ends this month with Sweden, the star of the recovery.  Sweden is often hailed by Keynesists and many alike as a "poster child" of a welfare state that succeeds in creating an equal society while maintaining macroeconomic stability. It  is very often promoted as the model upon which the US and the UK should organize their economies.   But Sweden today is far from it. It has moved from a focus on equality to a focus on dynamic growth. I t is  persistently  ranked among the   most free nations   in the world (along with other Scandinavian countries).  Particularly in the last 20 years, Sweden became the perfect example of a state with high levels of individual and economic freedom.  It has an institutional system which clearly defines rules in a society but which doesn't discourage innovation or incentives to work and create value.  Its history of strong unions, h
8 comments
Read more

Europe is once again on the edge of the cliff. They’ve been in this situation so many times since August last year that the entire story is becoming ridiculous. Spain is out of money to finance itself and its banks; Greece , even though the pro-bailout coalition was formed, remains Europe’s weakest point; Italy is in direct threat of a Spanish default (the situation was reversed 6 months ago, when Italy was the one who threatened to pull Spain along with it), and yet the blame again falls on Germany. Some economists even claim that Germany is being the biggest threat to the survival of the euro and that its forced austerity and unwillingness to step up and offer more bailouts and more support for the Union, are the main reasons behind Europe’s slow (and virtually non-existent) recovery.  Even among the Germans themselves, notable economists argue over whether or not Germany should offer more bailouts and consequentially bear more risk (I recommend an interesting debate on this
4 comments
Read more

Usually comparing countries or regions requires looking at GDP growth data, GDP per capita, living standards, relative income or even the happiness index. But even a simple areal glimpse at the borders separating two systems can be more than enough to conclude which country is richer, healthier, more educated and on average more prosperous. It tells us that the causes of between-country differences have to be more than just climate, geography, culture or mentality. Particularly when the same nation is separated by nothing more than a border depicting the striking differences in political systems of the two countries (a classical example here are East and West Germany, but an equally good example can be North or South Korea).  As a result I found that the following set of images paint a better  picture  on between-country differences   than any existing data on global inequality.  The first one is from a  blog post I encountered on the Why Nations Fail blog, comparing the citi
9 comments
Read more 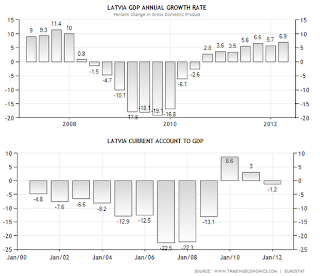 The monthly cross-country overview continues with examples from the Baltic and their lessons for Europe and its endless recovery.  Source: Trading Economics In his latest article , Olivier Blanchard, chief economist of the IMF, pinpoints the success story of Latvia, a country that experienced a typical boom-bust cycle. After a strong,  Chinese-style growth in the decade preceding the crisis followed by a sharp increase of its current account deficit (>20% of GDP - see figure), in 2008 due to mostly outside contagion came a slump and a 10% decrease of GDP (in 2009), huge fiscal deficit, capital flight and surging unemployment (from 5.4% at its 2008 bottom to 20.7% at its peak in 2010). It’s striking how similar all these European cases are – from Iceland to Spain and Ireland, which all sustained a typical asset price boom, to Greece , Italy or Portugal whose governments based their electoral winning welfare state policies on cheep borrowing conditions – they all have on
3 comments
Read more 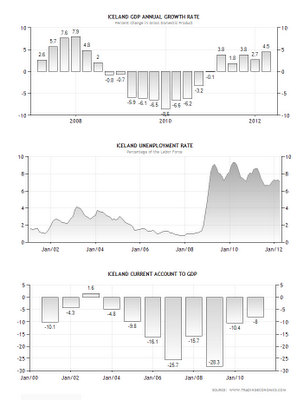 Source: Trading Economics Iceland’s crisis and recession went down much harder than in most European countries (well, except Greece ). Cheep credit and (unobserved) accumulation of systemic risk in the early 2000s led to a substantial distortion of signals sent to the real economy. They had a huge exposure to the US financial system with assets tied to many US subprime mortgage-based securities . The post-Lehman collapse followed by the subsequent bankruptcy of Iceland’s overleveraged banks was hardly a surprise. The state interfered by protecting domestic depositors, not allowing the taxpayers to take the burden of a bailout. But this didn't stop Iceland from leading  a first case of a trial against a PM for mishandling of the crisis (accused for "negligence"). Mr Haarde was later found innocent by the countries’ courts, but it was nonetheless a strong message sent from Iceland on the seriousness of what happened back in those years. The GDP fell during his prime-m
9 comments
Read more

European North-South divide and the role of corruption 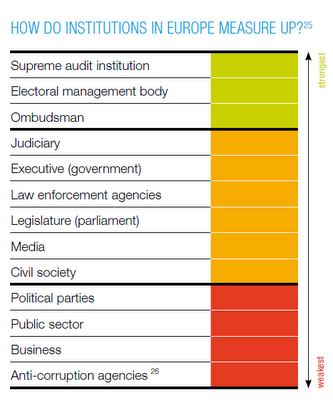 Is the European North-South divide a consequence of a different mentality, where one implies fiscal profligacy, an intuitively lazier workforce and an incentive to cheat, while the other implies the opposite? Is the peripheral eurozone a ‘victim’ of its culture or geographical position (amid Ireland) that makes the Southerners work less and live ‘easier’?  No. Culture, mentality and even the Mediterranean climate have nothing to do with the deep problems and divides Europe is facing at the moment. Other factors like the establishment of the euro exploiting the CA deficits, the paradoxical banking regulations leading to an equal risk and low interest rates for all countries making borrowing easier, and finally outside contagion that ceased the intra-regional transfers from the ‘rich’ North to the ‘poor’ periphery are much more liable for eurozone’s sovereign debt crisis .  As for the structural imbalances like the competitiveness of the labour force or the stifling bureaucracy
2 comments
Read more

Graph(s) of the week: Italian and Spanish bond yields 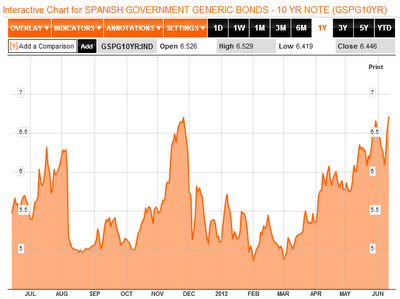 As expected, the Spanish bank bailout effect was so short term that it didn’t provide any momentum at all. I expected it to end right after the Greek elections this weekend, but it went down even quicker than that – one week, that’s how long the markets were optimistic about the bailout. But is this all that surprising? Not really. It’s just another good proof of the (in)effectiveness of ECBs policies  (* even though the bailout was officially made by the ESM, I explain in the comments why I consider them the same thing ). When banks hoard cash and deposit it overnight at the ECB or use it to buy government bonds with record low yields to hedge against any possible risk, then it’s obvious that the hands of the monetary authority are tied.  Spanish 10-year government bond yield Source: Bloomberg , 13/06/2012 Italian 10-year government bond yield Source: Bloomberg , 13/06/2012 Perhaps the investors are realizing this, which could be why the Italian bond yields surged to
3 comments
Read more 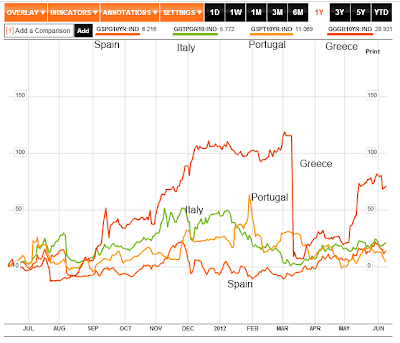 Even thought today’s €100bn Spanish bank bailout was hailed by Europe’s policymakers and markets as it once again temporary saved Spain and consequentially Europe from much bigger turmoil, the crucial emphasis is on the word temporary . In this case, as in any, temporary easing cannot be a good thing. Similar to the Long Term Refinancing Operation ( LTRO ) done by the ECB in December that was supposed to provide European governments with much more time to engage into and finally start with necessary institutional and restructuring reforms, the bailout effect is bound to only last for a few months, or maybe not even that much. Even more importantly (i) it won’t do any good for Spanish consumers or businesses, (ii) it will provide only limited time for the government to carry on with reforms, thereby not helping them much, as sooner or later the situation is likely to be the same, and finally (iii) it won’t even encourage Spanish banks to lend more.  I’ve already covered the ECBs p
6 comments
Read more

Russia’s path to a twin deficit 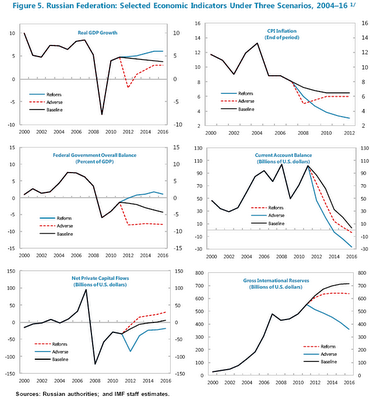 Vladimir Putin , still hailed by many in Russia for their successful transition from socialism to ‘state capitalism’, is facing much more economic instability than he did in his first two terms (from 2000 to 2008).  To remind the readers, the Russian transition from socialism in the 90-ies was characterized by a booming number of oligarchs who controlled most of Russia’s oil and gas resources and which were to a large extent responsible for increasing criminalization and impoverishment of the country. In such a desperate situation which has seen Russia slipping from the world super-power to a bankrupt economy dependent on Western aid, the people longed for a leader who can set the country straight again. After all, one has to bear in mind that the Russians got used to having dominant leaders in the past, even much before the Bolshevik revolution in 1917. Never has Russia experienced true political freedom and democracy (especially not in the oligarch-controlled 90-ies), so the sud
2 comments
Read more 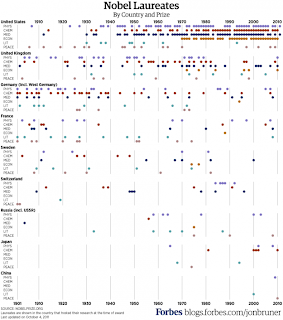 So far, most of my blog posts have been (geographically) focused around internal issues in the UK, US and selected Eurozone economies. Now I’ll move a bit “cross-country” which is why this month’s texts will be (mostly) concerning cross-country comparisons. The first post of the month on China has been in that direction. The success of the US Education has always been the creator of progress in a society. Technological advancements and innovation (based on secured property rights and the functioning rule of law which prevented new inventions from exploitation) have been the drivers of growth of the United States ever since it was founded. But the rapid accumulation of knowledge and technological innovation didn’t start in the US until after WWII. One proof of this is the disproportional size of Nobel prize winners situated in the US prior and post WWII. With Germany, UK and France leading the way in sciences prior to the War, in the last 60 years the US has outpaced them signif
2 comments
Read more
More posts