Showing posts from February, 2015
Show All

Greek game theory: You can fool the voters but not the financial markets 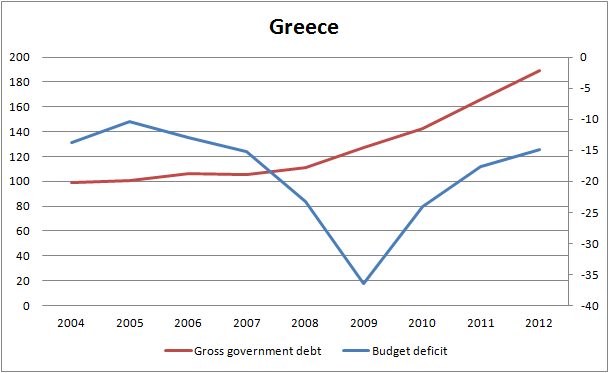 Back in November 2011  an increase of Italian bond yields for the third time in three months and for the first time above the critical boundary of 7%, resulted in an abrupt and surprising resignation of Italy's controversial PM Silvio Berlusconi. All of his corruption affairs, political blunders, and even the infamous bunga bunga parties could not hurt him. It was the financial markets that punished his reckless behavior of buying time for reforms by playing with the patience of investors. The financial markets will be crucial once more in the case of the newly elected Syriza government in Greece, led by the radical leftist Alexis Tsipras. After having read his  op-ed for the Financial Times  published but a few days before the elections, it seems Tsipras realizes the gravity of the situation he and his country are in. Apart from the general anti-austerity rhetoric which won him the elections, Tsipras clearly stated that Syriza will respect the constraints given to them by the
2 comments
Read more

February 11, 2015
On a few previous occasions I've found myself praising 'good hunches' of certain economists on being right about a number of predictions for the future (see here and here for example). There's also been a few not so good hunches (like when Paul Krugman asked Alan Greenspan to create a housing bubble in 2002 to offset the IT bubble) and a few downright terrible ones (like when Paul Samuelson predicted that the Soviet Union GDP will surpass that of the US by 1984(!), but more realistically by 1997).  Now it's time to blow my own horn. I've been covering the eurozone sovereign debt crisis and in particular the Greek situation since I started writing this blog. After all, the crisis was a sort of an inspiration. I was rather content to see how precise I was back in October 2011 to describe the possible outlook for Greece in the next few years, after the policymakers have devised their first draft of the Greek bailout plan. Here is what I wrote back t
Post a Comment
Read more
More posts