Showing posts from July, 2013
Show All

Video of the week: the Dismal science

A video on how economics got to be called the " dismal science ": It's a very interesting history lesson from the Marginal Revolution University  (the online University I wrote about last September , led by Tyler Cowen and Alex Tabarrok). The video goes all the way back to the 19th century philosopher and historian Thomas Carlyle who coined the derogatory phrase. And the reason was his disagreement with economists (like John Stuart Mill ) on the question of slavery and Black Emancipation. Carlyle's political philosophy was Hero worship  (superiority of dictators like Oliver Cromwell or Napoleon) expressing the benefits of hierarchy where everyone should "know their place". He strongly opposed abolishing slavery for which he though was necessary to prevent order and force people to work who otherwise wouldn't do so. His ideas are said to have influenced both the rise of socialism and fascism in the 20th century (thus reinforcing Hayek's points
Post a Comment
Read more

Graph of the week: Climbing the income ladder 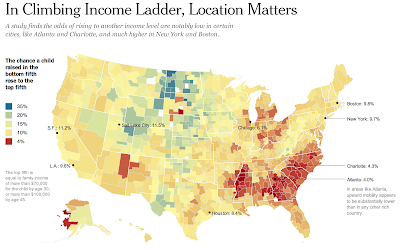 New York Times has the story: Source: NY Times  (Click to enlarge) The map depicts US counties based on the probability a child raised in the bottom income quintile (bottom fifth) rises to the top income quintile (top fifth). The redder the district, the lower the level of upward mobility. The Southeast seems to score the worst in those terms, in particular in states like Georgia, North and South Carolina, Alabama and Mississippi it appears to be really hard to climb the income ladder.  The story NYT was focusing on is Atlanta , one of America's most affluent metropolitan areas (pop. 5.4m), yet a city with a great level of income inequality, and apparently a terrible level of upward mobility (only 4% chance to reach the top quintile). According to a study done by researchers from Harvard and Berkeley, " The Equality of Opportunity Project ", economic geography of Atlanta is what could be one of the culprits for its low social mobility:    "The low-inco
1 comment
Read more

How is Britain's recovery hanging on? Recent indicators from the ONS  reported a 0.3% growth in the first quarter of 2013. However, one can never be too careful with Britain. After all, haven't we seen the UK going in and out of recession two or three times in the past 3 years? And it was always less than a percentage point upwards or downwards. The labour market however has remained resilient, with unemployment still around 7.8%. During the recession employment is reported to have fallen only by around 2% from peak to trough, while total hours worked have fallen by around 4%. It is rather interesting how the labour market was struck much less than initially expected. Even though a lot of public sector jobs were lost in the midst of the coalition government cuts, this hasn't translated into the labour market that severely. There can be several potential reasons for this, some of which I covered before , but the fact remains that the labour market recovery was much m
2 comments
Read more 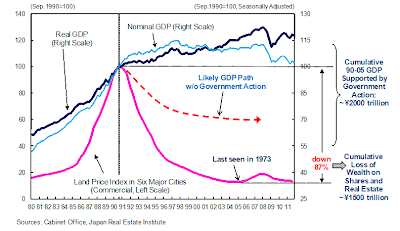 This week in the blogosphere Japan captured the center of attention. Noah Smith started the debate pointing out that Japan isn't a textbook example of anything, claiming that neither monetary nor fiscal stimuli will work there. "It seems to me that the standard New Keynesian sticky-price story just cannot explain Japan. The “short run” for Japan is over and done. We are not looking at a “short-run” fluctuation caused by sticky prices.  This has implications for policy. It means that we can’t expect the “first arrow” of Abenomics – quantitative easing – to boost the real economy through the kind of channel described by a New Keynesian or AD-AS model . ...     ...But I don’t think Japan is living in an RBC world either . Because in an RBC world, keeping interest rates at zero for decades, and printing a bunch of money (as the Bank of Japan did in the mid-2000s), should cause inflation (without helping growth). Instead, we see persistent deflation. ...   [and even decli
1 comment
Read more

The Chinese bubble economy: How long will it withstand the pressure?

China's GDP growth slowed down to 7,5% in the second quarter of this year, mostly thanks to faltering exports and retail sales. Albeit, this is still impressive growth, despite the fact that the government will probably miss its annual growth target for this year. There is something to be worried about - it's the way in which China keeps on hitting its growth targets. Here's the WSJ : "China’s economy is far too dependent on investment –which has in recent years made up around half of all growth. Household consumption, meanwhile, was just 38% of GDP in 2011–some 20 to 25 percentage points below the consumption rates among China’s neighbors ...    China’s massive investment rate all but guarantees vast amounts of malinvestment . In other words, plenty of these resources haven’t really been invested but rather have been consumed in altogether unsatisfying ways that have made people marginally better off in the near term (keeping people in work and oligarchs
8 comments
Read more

100 years of the US Federal Reserve 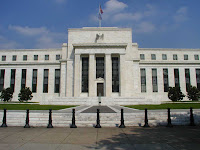 In retrospect not the best of decisions , however thanks to it we have learned a lot about monetary policy over the past 100 years (this is purely academic curiosity talking). Then again, many economists still disagree over what monetary policy can and can not do (and more importantly under which circumstances it can or can not react), which is probably why monetary policy is one of the most misunderstood areas of economics for laymen. Yet another reason why preserving central bank independence (both goal and instrumental) is crucial for financial stability.  Anyway, the NBER has organized a conference for the occasion, featuring some impressive names in the field of monetary policy, including former governor Paul Volcker, Stanley Fischer, Larry Summers, Martin Feldstein, Jean-Claude Trichet, Frederic Mishkin, Carmen Reinhart, David and Christina Romer, and of course current Fed Chairman Ben Bernanke. Here are some interesting parts from his speech (a fairly well historical ov
1 comment
Read more

The quest for inclusivness (and a better democracy) 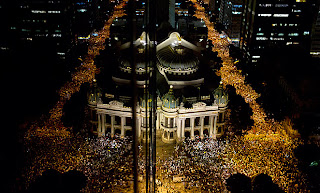 Over the past few weeks some parts of the World have been subdued into protest mode. In Turkey it all started as a protest against a dubious building site project in one of the largest parks in Istanbul, and has escalated into a country-wide protest against a controversial, authoritarian Prime Minister Erdogan, whose corrupt and unconstitutional activities too often get unnoticed in the West. On the other part of the globe, in Brazil , protests started against bus fare increases in Sao Paolo, but quickly evolved into mass protests against the government's policies vis-a-vis the organization of the FIFA 2014 World Cup, where the protesters demanded to know why the government is building stadiums, and not investing into proper health care, education or public services (* - see note below). In the semi-consolidated Egypt a military coup has ousted the authoritarian, however democratically elected president Morsi, triggering violence and fights on the streets of Cairo between pro-
3 comments
Read more 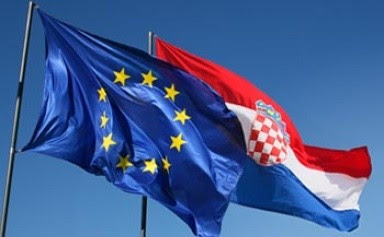 Today Croatia became the 28th member of the European Union. After a  long  (12 year) EU accession process, after undergoing rigorous scrutiny (EC became careful after Bulgaria and Romania), a couple of corruption scandals, border issues with Slovenia and some attempts to strengthen domestic institutions, the  European Commission  has declared Croatia fit to join the EU. The media across the globe has followed the story; the comments range from optimistic, realistic to pessimistic (see  Reuters ,  New York Times ,  BBC ,  Financial Times ,  the Economist ,  WSJ ,  Guardian ,  Deutsche Welle , etc.).  This 4,3 million populated country with GDP a bit over $60bn is hardly going to affect economic affairs in Europe. However, as we've seen by the examples in Cyprus or Slovenia, one can never be too careful. Having said that, it should be noted that Croatia didn't experience the financial troubles of Greece, Cyprus or Slovenia. In Croatia the banking system remained strong
5 comments
Read more
More posts