Showing posts from April, 2015
Show All

At some point in the middle of 2014, opinion polls in the UK revealed that immigration became the most important issue in Britain (see graph below), surpassing even the debates on the economy (probably because the economy is now in a better shape than before, with 2014 growth around 2.6% ). What best showed this change in sentiment was the homepage of the British Office for National Statistics (ONS) during the autumn of 2014, where the first figure you could see was that of net migration (which was around 300,000 in 2014). During the 'good old times' of the stagnant recovery (2009-2013), the first thing you could see when you entered the ONS website were the GDP growth estimates, followed by numbers for the CPI, budget deficit, business investments, etc. For quite some time the main page didn't even feature data for the debt and deficit. You had to dig around to find them. Obviously the Britons are bemused with the popularity of the UK Independence Party , particularl
Post a Comment
Read more 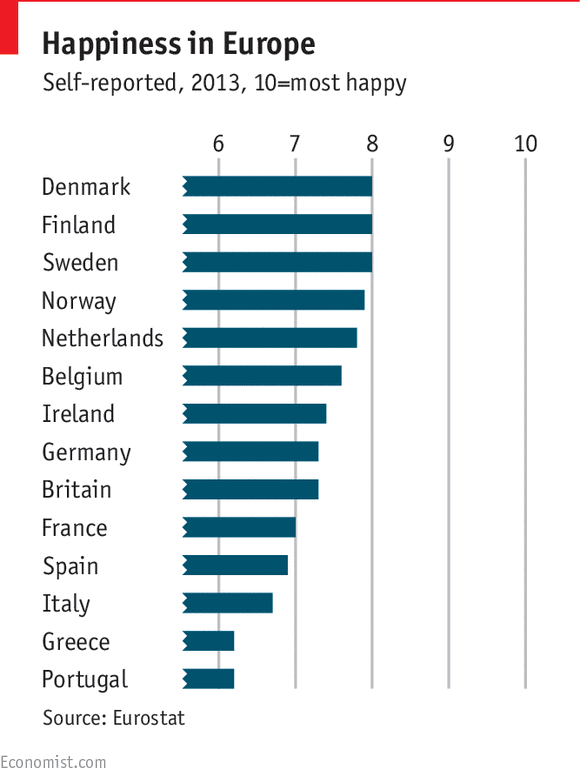 From the Economist , calling upon a report from Eurostat: what drives happiness in Europe and how heterogeneous European countries tend to be when it comes to the satisfaction with their living standards.  Source: The Economist "ONE frequent stumbling block for the European project is the fact that different countries want different things. Recent Eurostat polling on self-reported happiness highlights those divergences. As usual, Scandinavians are the happiest people in Europe and retired Danish women are the cheeriest among them, reporting a happiness score of 8.5 out of 10. In general, geography is the best predictor of merriness, followed by pay. At all income levels a step up one quintile on the income scale makes people more content. Yet the poorest 20% of Danes are more joyful than the richest Greeks." Bear in mind that the data on happiness is self-reported, which can make it a bit biased. However, even with all the problems of self-reported survey data, the
Post a Comment
Read more

The taxi market is undoubtedly one of the best examples of something economists like to call rent-seeking . What does this phenomenon stand for and why do economists (particularly political economists) devote a lot of attention to it?  The classical definition was given by Gordon Tullock back in his  1967  seminal paper "The welfare cost of tariffs, monopolies and theft" , even though the phrase itself was coined by Anne Krueger in 1974 .  Rent-seeking is a process of gaining private benefits through the political process (by lobbying or logrolling for example). It implies gaining protection for a certain privileged group, which in return promises political support, large campaign contributions, or even bribes. This protection varies from giving a monopoly status to a certain company, regulating market entry than hampers competition (such as introducing licences to specific occupations), imposing tariffs to import goods to protect the domestic industry, handing out su
19 comments
Read more
More posts