July 30, 2012
The series of tracking the recovery continues with Europe; in particular looking at the manifestation of the recovery in the Eurozone and the UK. The analysis will constrain itself only on observing the leading indicators from the OECD database and the Conference Board, and compare these to their levels from 6 months ago.

We start with the Eurozone leading indicator (LEI) published by the Conference Board. They compare the LEI with a coincident economic index and the quarterly RGDP growth rate. The latest version of the indicator was published last Friday, 27th July 2012 (data for end of June). In the previous post, from 6 months ago I explain why in Europe we only focus on the final product, the LEI index, instead of going through every individual indicator as we did in the US tracking. (Click on image to enlarge)

After the initial recovery in the first quarter of 2012, shown in the LEI (blue line) as a small “bump”, which certainly offered a much needed increase of confidence after the troublesome November and December, things started to deteriorate again in May and June (Spanish bank bailout, Greek and French elections, etc.). This made the 6-month change in LEI a negligible 0.1%, bringing the Eurozone back at the start, only with more time wasted not undertaking the necessary reforms, making the adjustment even more painful for its citizens. Looking deeper into this can we conclude of a European double-dip, similar to what the UK is experiencing at the moment? Not really, I would rather refer to this situation as 'levitating in a status quo', with dire consequences of inaction.

Moving further, the OECD offers an opportunity to look at the indicators for individual eurozone countries and compare the recovery for each of them. 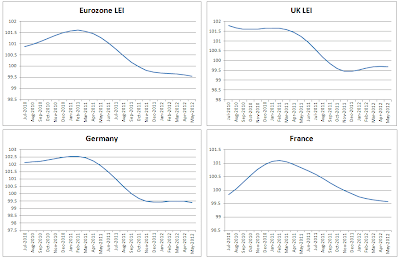 If the data would have been more recent, I'm sure the indicators would be a bit more downward sloping, particularly for the UK, given its recent performance. The UK is an interesting example, having entered three consecutive negative quarters of growth, it has seen a LEI slightly facing upwards in the first 4 months of the year, suggesting a forthcoming improvement of the economy. However, due to the recent developments in the Eurozone, the UK slid back into recession (or never even got out of it). This could mean that the UK has a particularly strong exposure to any bad news coming from Europe, which is tied to the UK's strong links (particularly in trade) to the Eurozone economy as a whole. UK's politicians may be right when they blame Europe for poor domestic performance, but Europe is only one part of the story. The government's incompetence is another (potentially much larger part).

The LEIs for France or Germany were on a negative path  6 months ago, but have stabilized since. Even though apparently not enough due to the high dependency of their indicators on the unfolding of the Eurozone crisis. Apparently their LEIs will react ex-post any changes in Europe, which doesn't make it that good of a leading indicator. As for the "periphery", Spain comes as a bit of a surprise, however keep in mind that by the end of April Spanish bond yields were sliding back to their September levels (after the ECBs first big bond buying scheme designed to help Spain and Italy, who were at the time pictured as illiquid rather than insolvent). However in time for the next Recovery Tracking update, we will look back to see the Spanish LEI deteriorating at the present time and very likely in the following few months as well.

Last time I criticised the concept of the leading indicator and it's applicability in the Eurozone under so much uncertainty. The underlying data only re-emphasises that point. From looking at the LEI in April or May one couldn't have concluded that the following three months (next quarter) would bring things back to what they were in December. However, by looking at political decisions and daily market announcements, an investor can make much better predictions than relying on a leading indicator, even in uncertain times like these. Too much unfortunately depends on political action or better yet political inaction. The politicians at the periphery are sticking to the least objectionable option - the status quo of doing nothing. This makes sure they don't breach any of the bailout deals they made with Germany, IMF or the ECB, and it makes them postpone the ever more painful labour market and business environment reforms. They seem to be waiting for the solution to come up by itself, or that somehow borrowing becomes cheap again and so that the unsustainable welfare state model can be financed (at least during their time in power). The outcomes of the business cycle movements are proof of this sort of negligent behaviour. Doing nothing only makes things worse. Spain is the perfect example, unfortunately.
Business Cycle Eurozone Financial Crisis Germany Greece Italy Portugal Recovery Spain UK