Graph(s) of the week: comparing US Presidential performance

October 31, 2012
Relating to a graph of the week from two weeks ago, I again turn to the Economist and its interactive feature comparing the performance of past elected Presidents in their failed or successful re-election bids. What is really interesting is that President Obama seems to, on average, have much worse economic results than most other Presidents who failed to be re-elected, particularly in the disposable income category (third graph). 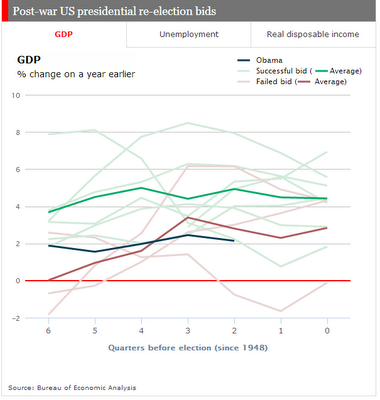 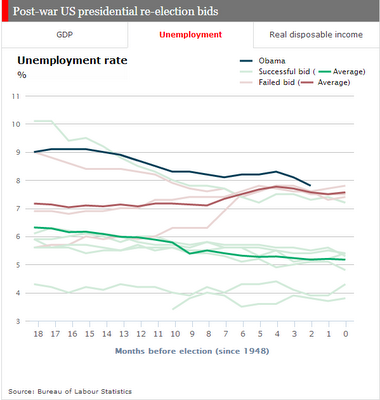 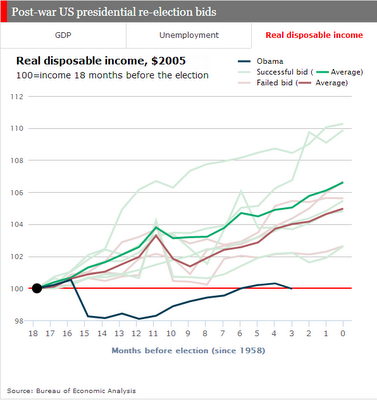 The other two categories (GDP and unemployment) also look disturbing, where Obama's current performance is worse than an average failed re-election bid.


Having all this in mind, it's interesting to see how a lot of economists still think he's the right man for the job (at least according to the partially biased survey described in an earlier post). It is true that the President found himself in the middle of a huge wealth shock to the public and is facing massive develeraging (see second graph) for the whole economy. There is also an important factor of a sluggish recovery from a financial crisis. This is, I think, the main angle for the Obama campaign. If they are able to convince the median voter that the recovery is slow due to a financial crisis shock, they are very likely to get him re-elected. Now this certainly is the case at the moment, but the biggest issue, in my opinion, is the unwillingness to recognize the structural problems the United States is facing (Europe is a similar story). These structural issues can't be solved by short-run stimuli, but via a long-run commitment to reform the system and to adapt to a newly formed technological environment, and accept new patterns of production and labour market specialization.


Keeping this up they will both end up like Japan: a two-decade long hopeless case of close to zero growth, unconventional monetary policy measures with almost no real effect on the economy, similarly ineffective fiscal policy measures, and with an endemic reluctance to reform and adapt. I hear that the Japanese are learning their lesson by now, let's just hope that the United States will do the same before repeating their mistakes. No matter who becomes the President.
Financial Crisis Political economy Recovery USA