October 01, 2012
A lot of pro-fiscal stimulus arguments in the US and the UK come from the classical zero lower bound (ZLB) assumption, in which monetary policy is said to be ineffective when interest rates hit zero (the lower boundary). This means that the central bank is basically ineffective in its further monetary operations to kick-start the economy, since it cannot lower rates to negative levels (this is not to be confused with real negative interest rates paid on, for example, German bonds).

So in this situation of the zero lower bound trap (or as Keynes called it the Liquidity trap), the only favourable option is to kick-start recovery via fiscal stimulus. In particular, the fiscal stimulus would include more spending on infrastructure projects and direct packages of support to certain business projects (like the green economy).

(Disregard at the moment monetary stimulus arguments I’ve covered in three previous texts – here, here and here; ideas such as NGDP targeting for example certainly have merit, and they certainly overrule the ZLB assumption, but I don’t see them as the best response to the current crisis, simply due to a different opinion I hold in which type of shock caused such a persistent crisis.)

From another perspective, low interest rates signal that the government can borrow more under such good conditions. This is an example of a counter-cyclical economic policy, one that tries to stimulate the economy out of a recession (depression), and within its scope it is ok to increase the deficit and raise public debt in order to get the economy going. The reason this isn’t unsustainable are precisely the low interest rates at which governments can borrow.

Without repeating my previous points on why I think infrastructure projects, more government spending and/or higher deficits won’t do us any good at the moment, I will just briefly touch upon the dangers of keeping interest rates too low for too long, and what their real costs for the economy might be.

Here’s from a speech by James Bullard, President of the St. Louis Federal Reserve Bank, back in February 2012:


"...the lengthy near-zero rate policy punishes savers in the economy...

These low rates of return mean that some of the consumption that would otherwise be enjoyed by the older, asset-holding households has been pared back. In principle, the low real interest rates should encourage younger generations to borrow against their future income prospects and consume more today. However, this demographic group faces high unemployment rates and tighter borrowing constraints, which may limit its ability and willingness to leverage up to finance consumption. Consequently, the consumption of the older generations may be damaged by the low real interest rates without any countervailing increase in consumption by other households in the economy. In this sense, the policy could be counterproductive."

Ken Rogoff wrote a good article a while back titled “How Long for Low Rates?”, where he also emphasizes the dangers of low interest rates, saying that the low interest rate dynamic is not stable and that it could unwind quickly:

"Investors are increasingly wary of a global financial meltdown, most likely emanating from Europe, but with the US fiscal cliff, political instability in the Middle East, and a slowdown in China all coming into play. Meltdown fears, even if remote, directly raise the premium that savers are willing to pay for bonds that they perceive as the most reliable, much as the premium for gold rises. These same fears are also restraining business investment, which has remained muted, despite extremely low interest rates for many companies."

What happened in Japan?

One good case study that can point us to the dangers of keeping low interest rates for too long is Japan: 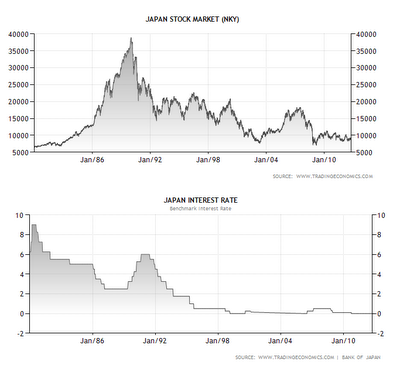 Looking at the graphs we can see that slow responsiveness of monetary policy in the beginning of the 90-ies had negative repercussions for the economy. Also, the 1990 increase in rates was obviously a very bad idea. Having learned their lesson, the Japan central bank has kept rates at zero or near zero ever since, persistently for the last 16 years (FYI, it's currently zero, and has been since October 2010, down from 0.1).

For the record, Ben Bernanke criticized Japan's monetary policy on accounts that it was too slow, its communication policy was unclear, and that it was afraid to raise inflationary expectations (this caused Japanese inflation to levitate around zero for the past 20 years, with several deflation periods - see here).

Was Japan hit by a one-off aggregate demand shock which would have been allegedly easily solved with monetary or fiscal stimuli? Not likely. It is true that Japan's economy was hit by an aggregate demand shock in the early 90s, but the shock triggered structural problems in the economy, all hidden due to the previous boom in the 80s. Japan didn't fail to react with fiscal or monetary stimulus, it failed to reform.

The arguments that monetary or fiscal stimulus came too late are not very sound in this case. After all, they did occur. The fact that they were late meant that there was no immediate, short-run bounce-back of the economy. There was a reverse of the negative trend in 1996 and 1997, but this period, and all others, was characterized by sluggish growth, much like what the West is experiencing today. So their monetary and fiscal efforts could only produce short-run effects when the economy was expecting supply-side reforms. The case study of Japan isn't proof that they failed to apply a stimulus, it is proof that stimuli didn't work in Japan.

Observing it from today's perspective this is exactly what more fiscal stimuli would result in. Monetary policy would continue in keeping interest rates low and continue with unconventional measures, while ambiguous fiscal policy and higher taxes would keep the economy locked in the lower equilibrium. Today's economies in recession should take serious note of this.

Besides, have in mind that one other economy also entered a crisis in the early 90s which was rightfully portrayed as an aggregate supply shock and productivity slowdown. Regular readers of the blog recognize that this country is Sweden, and its structural reform response was more than successful.
Fiscal Stimulus IEA texts Inflation Japan Monetary Policy NGDP targeting Quantitative Easing Recovery