September 16, 2012
Last week the Federal Reserve announced a third round of quantitative easing (QE3), manifested through a series of measures designed to help stimulate economic activity in the US economy:

"To support a stronger economic recovery and to help ensure that inflation, over time, is at the rate most consistent with its dual mandate, the Committee agreed today to increase policy accommodation by purchasing additional agency mortgage-backed securities at a pace of $40 billion per month. The Committee also will continue through the end of the year its program to extend the average maturity of its holdings of securities as announced in June, and it is maintaining its existing policy of reinvesting principal payments from its holdings of agency debt and agency mortgage-backed securities in agency mortgage-backed securities. These actions, which together will increase the Committee’s holdings of longer-term securities by about $85 billion each month through the end of the year, should put downward pressure on longer-term interest rates, support mortgage markets, and help to make broader financial conditions more accommodative."

They also announced a closer focus on the labour market:


"If the outlook for the labor market does not improve substantially, the Committee will continue its purchases of agency mortgage-backed securities, undertake additional asset purchases, and employ its other policy tools as appropriate until such improvement is achieved in a context of price stability."

Basically, the Fed is willing to take on a higher temporary inflation in order to lower unemployment and help the mortgage market to recover. It will buy bonds until the recovery becomes robust enough. Such a decision is based on its credibility to keep inflation under control in the future, but it's still careful enough not to adapt new targets or policy rules. It will operate within the existing framework, but with a more dovish look on inflation, at least until the economy and the labour market start recovering. This is something that has been called for by monetary stimulus advocates for a long time.


FT Alphaville has a good analysis. FOMC's economic projections and quick assessments of the appropriate monetary policy can be found here.


Both the Fed and the ECB have in the recent month attempted to take a stronger position and a more active role in stimulating the economy. Pressures due to political failures to enable proper fiscal adjustments and initiate structural reforms have mounted over the central bankers and have forced them into more action.

I still feel the problem is political not monetary. Political inaction in reforming the unsustainable system cannot be replaced by monetary stimulus alone. Policies like QE3 or NGDP targeting (or a fiscal stimulus for that matter) aim to restore nominal GDP to its pre-crisis trend (i.e. to close the gap on the graph below). But the pre-crisis trend was build on an unsustainable welfare state model that needs to be reformed. The boom decade was characterized by political concessions in Europe and an increasing warfare-welfare state in the US (many other things in the financial system went wrong as well, but leave this aside for now). The crisis has revealed the faults of the old growth model.

A new paradigm has to be rediscovered, new jobs need to be created. This was postponed by the Fed in 2001, after the dot-com bubble, but after a stronger market erupted (the housing market) consequences were much more widespread. The signal isn't to return to what we had before. I can't understand this logic. If what we had before is wrong, why would anyone want to preserve that? Where's the change (we believed in)?

Old jobs are being replaced by new ones but on a much slower pace. Existing constraints are preventing the restructuring from occurring faster than it should. This apparent private sector inactivity is putting even more pressure on the central banks to step in and at least increase inflation expectations and focus on fixing the unemployment picture. There's a bit of political economy in here too, which is especially being called at in the US, where the Fed decided to engage in the stimulus before the upcoming elections. They defend themselves by claiming that a slow recovery urged them to do something - a sort of a "now or never" argument. For the ECB it was simpler; they've been urged to do something big to the Eurozone for two years now. And they did a similar policy back in January that was short-lived. We are to wait and see will this action have the same short-term effect as the previous ones. My guess is yes, it will. (I'll cover them in a separate post)

Back to reality austerity

Proponents of fiscal and monetary stimuli like to use graphs like these to prove their point and say that quick action is needed (on one or either fronts) to close the output gap. 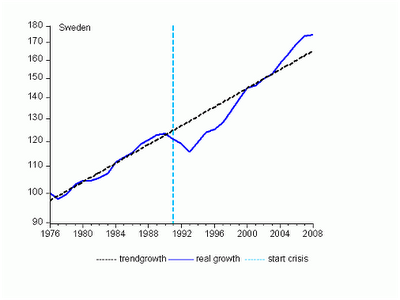 However, the big problem is that neither monetary nor fiscal stimulus played a key role in this particular scenario in Sweden in the 1990s. From a previous text on the Swedish structural reform, I come back to this graph: 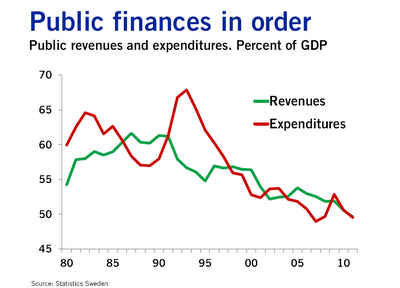 Yes, that's what proper fiscal restructuring looks like. And it has a big role in explaining why it closed the output gap by 2001. I wouldn't even call it closing the output gap as that would imply returning to the pre-crisis equilibrium. Sweden reached a new, better equilibrium.

If we want to learn anything from the Swedish example, then the lesson is the following: reform, reform, reform. Start from the labour market, union bargaining, and pensions; then move on to the tax and regulatory system by making them less burdensome to businesses; and finally finish with the entitlement system by adjusting it to the needs and means of the population. This is far from easy, as I've noted many times before, but it's the only road to a new and sustainable equilibrium.
Austerity Eurozone FED Monetary Policy NGDP targeting Quantitative Easing USA