September 13, 2012
Regular readers of the blog are likely to recognize the following graph depicting a precise estimate of the jobless recovery in the United States, much more precise than the unemployment rate can show:


Or this one, showing the slow pace of adding new jobs:


Even if we think of the slow job growth as the "new normal", the upper graph still points to a disturbing picture of all the jobs lost from 2008, where the E-P ratio decreased from an average 63% down to around 58.5%. One can claim that this restructuring was necessary and that there were simply too many unsustainable jobs out there. In other words, all the jobs that got outsourced in the past decade and were kept during the booming decade, are now too costly to keep around. This allowed the business owners to release the artificially preserved jobs. Perhaps this was a necessary restructuring done by the market in order to discover new production techniques. Perhaps the crisis (the creative destruction) served its purpose of enabling a faster trial and error process in the economy?

Either way, the newest data from last week showed another substantial decrease of job growth in the US, where the economy added only 96,000 jobs in August, down from 141,000 in July. Now this is certainly a large number, but it is weak compared to 8.8 million jobs lost in the recession, while only 4 million were recovered, and it is particularly low when you take it into perspective of the second graph.

However, last week I ran into another disturbing piece of evidence on the US job market - a comparison of jobs lost in the recession and gained afterwards based on the wage level occupations. This is my graph of the week:

Here's what the authors have to say:

Here is the distribution based on individual occupations which have created the majority of new jobs: 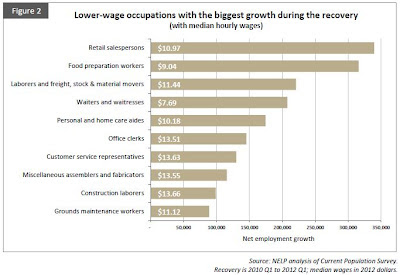 What does this tell us in terms of the restructuring of the labour market? One thing is certain, the new jobs are taken out of necessity, not out of the need for skills. People who lost their mid-wage occupations are willing to accept lower paying jobs, and jobs below their level of skills. This is more than enough to conclude that the recovery in the labour market is taking a (slow) step in the wrong direction. The private sector is constrained in hiring and investments and is therefore leaving the people with no choice but to accept anything they find. The process of creative destruction hasn't failed in this case; it hasn't been allowed to commence. At least not the 'creative' part.
Business Cycle Recovery Technology Unemployment USA