September 20, 2012
Still on the US Presidential election, Forbes asks which potential President is better for stocks? Usually one would infer that stock performance aligns more closely with a Republican, but the following table suggests otherwise: 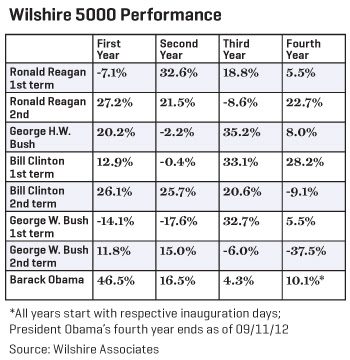 Don Boudreaux gives them both a run around. This is the message for Romney:

"Less forgivable is a campaign promise to break a campaign promise. Your wish to “label China a currency manipulator” means that you seek a pretext to impose (as your website says) “countervailing duties” on imports from China – which is to say, you seek a pretext for raising taxes on Americans who buy goods and services from China. Yet in other episodes of your campaign you promise (as you did here* last month) “I will not raise taxes on the American people. I will not raise taxes on middle-income Americans.”

And this is his message for Obama:

"Speaking today in Ohio, you bragged that your administration brought unfair-trade complaints against China “at nearly twice the rate” at which George W. Bush’s administration brought such complaints. In other words, your administration…
… is nearly twice as active as was that of your predecessor at raising Americans’ cost of living by badgering suppliers to hike the prices charged on products such as consumer electronics, furniture, and footwear;
… has doubled-down on the Bush administration’s efforts to raise production costs for the many American producers who buy inputs such as zinc and oil-field-drilling equipment from Chinese manufacturers;
… is two times as likely to pander to the economically ignorant in order to grant special privileges to the politically powerful, all in efforts to prevent Americans from spending their money as they see fit."

In different but related news, the Fraser Institute in association with the Institute of Economic Affairs has published the newest edition of the Economic Freedom Index. What is worrying is that the UK and the US are out of the top 10, while the US is close to being out of the top 20 on its lowest ever 18th place. For two countries that used to pave the way for economic freedom, this is a highly disappointing result. 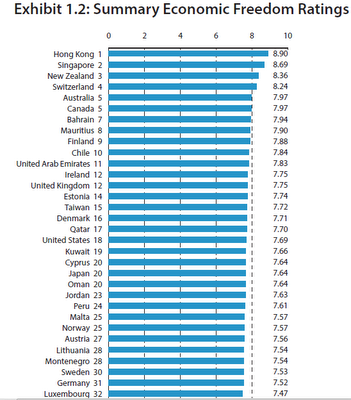 The "usual suspects", Hong Kong, Singapore, New Zealand, Switzerland, Australia and Canada are joined in by Bahrain, Mauritius and Chile. I am happy to see Estonia fighting its way to the top, and I'm equally excited for Arab countries such as UAE (11th), Qatar (17th), Kuwait (19th), Oman (20th) and Jordan (23rd). Hopefully other Arab Spring countries will follow these successful examples. I'm also happy for small countries like Malta (25th), Lithuania (28th) or Montenegro (28th) (Luxembourg is a case for itself). This only proves that size doesn't matter; what matters is willingness to achieve economic freedom. And why is freedom important? "Research shows that people living in countries with high levels of economic freedom enjoy greater prosperity, more political and civil liberties, and longer life spans."

Now for the two disappointments, United States and United Kingdom. In the 1980s, US was ranked 3rd, while the UK was 6th. United States deteriorated in the last decade in regulation (17, down from 2), international trade freedom (42, down from 8) and surprisingly legal system and property rights (33, down from no.1 in the world in 1980). In the last category the crucial issues were judicial independence, impartial courts, protection of property rights, and military interference in the rule of law (?! from grade 10/10 to 6.67 - what's happening in this country?). Other worrying parameters were capital controls (international trade category), administrative requirements, hiring and firing regulations, bureaucracy costs and bribes.

I don't live in the United States, but if this is true, than this is a serious problem for a country that used to be the panacea for property rights, the legal system, and most of all economic freedom. Has crony capitalism took its toll?

So going back to the first graph, economic performance of Presidents after 1980s and Reagan, and in some parameters after Clinton and the 1990s doesn't seem to explain the deterioration of economic freedom in the US. If I were to evaluate presidential performance I would use economic freedom indices rather than the Dow.


Whoever does become president will have to do a lot to address this important issue - how to restore economic freedom in the US. Going back to their positions on international trade, I somehow doubt this will be on their list of priorities.
Crony Capitalism Economic Freedom Graph of the Week Political economy Trade USA