Apple and the economy: why the West is switching to services?

January 29, 2012
Last Sunday the New York Times presented a report on "How the US lost out on iPhone work" calling on the phenomenon of the disappearing middle class, claiming that even though Apple is a hugely successful company, its success reaps more benefits abroad than domestically, at least when observing the figures behind job creation.


Apparently, in addition to providing excellent customer value and service, Apple is supposed to rebuild the US manufacturing industry, by shifting its factories back to the US and create more domestic jobs to help kick-start the current sluggish recovery.


Why are they helping China, when the US is high in unemployment? Why aren’t they creating jobs here in the US, ask the NYT reporters. And yet they list an impressive list of reasons why Apple still shouldn’t be doing so.

The first one is speed and flexibility, the second is scale of production and size of population, the third is cost of both labour and inventory, which are all impossible to match for any Western economy. And Apple isn’t the first or the last company to switch to Asia.

“The entire supply chain is in China now,” said another former high-ranking Apple executive. “You need a thousand rubber gaskets? That’s the factory next door. You need a million screws? That factory is a block away. You need that screw made a little bit different? It will take three hours.” (New York Times, 22/01/2012) 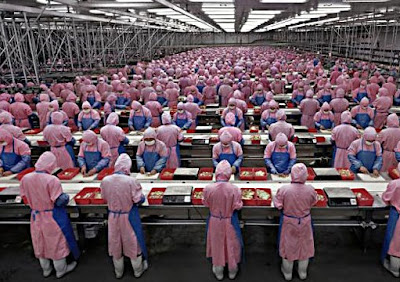 We can discuss why Chinese labour costs are so low, and conclude that this is mainly due to high competition that is the actual driver of this country’s growth, but even that will only partially explain why the West is moving electronics production to Asia.

The economies of scale are now worldwide. Globalization is to ‘blame’. This is the law of competitive advantage applied to a worldwide level. Some countries specialize in manufacturing and manual labour, and others, where this became too expensive to support, are switching to services. It’s a natural process, and a process that is futile to resist. The best thing to do is to adjust, which the US has been doing. It became the centre of the world in financial services and the IT industry, and for a long time now in higher education and science. The system build in the US, based on science and education gives a boost to these industries and enables them to outsource and export their services. 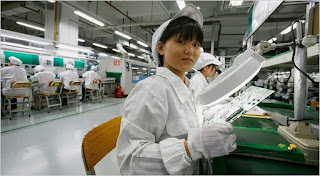 If the US is best in providing services and creating unique ideas, this should be the focus of its economy, enabling China to support that in manufacturing. Once (if) China develops enough to become a distributer of knowledge as well, the manufacturing will be able to move to, for example, Africa. But this is unlikely as Chinese population gives a whole new meaning to the principle of economies of scale, and is likely to strive on this advantage for a long time. And the US should accept this. China isn’t disadvantaging the US through its devalued currency; it’s simply using its competitive advantage in providing not only cheaper labour, but also a highly developed supply chain and an altered definition of economies of scale. It takes them much less to complete a job, for much less costs of both inventory and labour. In a global competitive environment, efficiency matters. Those companies that are unable to adjust (like Kodak, which filed for bankruptcy last week) will be forced to close down.

Don Boudreaux made an interesting claim that the report served as an evidence for a high level of prosperity enjoyed in the US:

"As your reporters admit, Apple uses lots of overseas workers precisely because those workers are willing to work in worst conditions and for lower pay than are American workers – strong evidence that the options open to even low-skilled Americans are far superior to those of most workers in developing countries.  Our prosperity enables even the poorest of us to avoid such toil."

Instead of being proud of having such a strong company emerged in the US, along with all other big international conglomerates, the debate is switching to inequality and how these firms should be more ‘patriotic’ and hire domestic workers. But what they fail to realize is that this sort of reasoning would destroy the very foundation on which these successful companies built their wealth. Furthermore, it would increase their costs and lower their revenues and profits, forcing them to offload more and more workers. As always, a temporary policy aimed at creating more jobs would result in a long-run disaster.

It's truly unfortunate that some “would rather have the poor poorer” and working in such conditions “provided that the rich were less rich” (Margaret Thatcher, 1990)

Ultimately, it’s not all about jobs, it’s about creating value, and this is something Apple is good at. In addition its innovations made changes in the music industry and the telephone industry, making our lives easier and more prosperous. To all the people out there using an Apple product, you decided to buy it, not necessarily because it has better performance, but because it’s simple, user friendly and looks good. This is called providing value to the customer, to which the customer will reply with constant and returning business.


In addition, even if Apple didn’t employ as much people as GM or Chrysler did, it offers a higher income to the workers it does employ. They will then use this higher income to acquire goods and services they wouldn’t have done before. They could borrow more, spend more on a variety of manufacturing goods, engage in service activities they couldn’t afford before, go to fancier restaurants and thereby help other US businesses – help the service businesses in the areas they live in. I’m sure workers in automobile manufacturing do the same, but to a much lesser extent.


Another thing everyone seems to forget is that Apple’s iPhone gave a boost to a completely new market – the market for iPhone apps. A lot of people with some basic programming skills and a good idea managed to create interesting and useful apps upon which they made a good income. This certainly increased the wealth of that household, which is again money to be used to further help other sectors of the economy. The shipment industry is also experiencing a boost of orders thanks to Apple products, as is the retail industry.


Apple's value added to the economy is far too great to calculate. Economics operates in a multitude of ways. Nothing is anymore one for one, every action has a multitude of effects that may or may not be beneficial. Having companies such as Apple, Facebook or Google in the US reaps so many unforeseen benefits to the US economy, which cannot be measured through the creation of jobs or tax revenues. There is a reason why they were created in the United States, not elsewhere. Why didn't Europe create anything like this? Or Japan? They all have an equally strong economy and an equally developed IT industry, if not better to some extent. But still, they emerged in the US, due to a specific set of preconditions that encourage innovation and progress. Don’t stop these crucial assumptions of economic growth just because inequality is temporary  high, which is again, an accusation that should be taken with caution. Don’t blame successful companies for the problems created in other sectors of the economies. Don’t be jealous on success – try and achieve it yourself. The founders of these great companies didn't stay home complaining, they went on to change the world and made millions in doing so. Follow their example and create your own future. As President Obama once said, “be the change you believe in”.
Business Economic Freedom Economies of Scale Inequality Unemployment USA