January 09, 2012
I stumbled upon a great blog post today from a Hungarian business owner on the prospects of starting a business in Hungary. He entitles it pretty clearly "This is why I don't give you a job". He points out to the devastating effects of the Hungarian system where business start ups are almost impossible, if you don't have political support that is. He describes the anti-capitalist mentality and systemic problems with corruption as the highest obstacles to creating and maintaining a stable business. From the variety of comments the text got I understand that many businessmen in Hungary share his concerns as some of them were forced to simply close down.
I recommend you read the full text to get the clear picture. The text itself contains some rough language, but while reading it I understand why the author decided to use it. There are simply no better words to describe the awful situation in the Hungarian private sector. The administrative, regulatory and tax burdens with which the text starts seem light compared to the system of political corruption, anti-capitalist propaganda and downright cronyism. Hungary is becoming the poster child of crony capitalism.
To avoid being biased by reading only one text I looked into the situation in Hungary in order to find out whether all these facts are true. They certainly appear to be. Hungary is in some views crossed the Greek scenario and could suffer even worse consequences. Here’s a text form the New York Times right after the new government took office a year ago and here’s what they say now. And here and here is more on the Hungarian economic woes from bloggers.
Furthermore, the IMF and the EU have pulled out of negotiations over a new line of credit due to the rise of what is believed to be authoritarianism. The talks have been restored however, but there are still issues to be covered. The constitutional reforms have outraged many Hungarians while the international organizations are mostly angry because of Hungary's PM Mr Orban's undermining of central bank independence. Talks have  even been on suspending Hungary's voting rights in the EU Council. Besides that, all three rating agencies downgraded its credit rating to 'junk status'. No wonder the country isn't attracting any foreign investments and is sliding into radicalism. Something is terribly wrong in Hungary.
The situation is turning to bad to worse and in some cases even paradoxical. The Economist reports in the latest issue (Jan 7th – 13th) on the country’s war against the IMF when they desperately seek international help and even secret services ordered to investigate currency attacks. The country is driving towards dictatorship. All the preconditions are here (shattered private sector, high corruption, authoritative prime minister, banning the media, nationalization, anti-capitalist and anti-business mentality), but the people still won’t let go. They’ve beaten communism once before, but this is another tough fight they will have to endure. 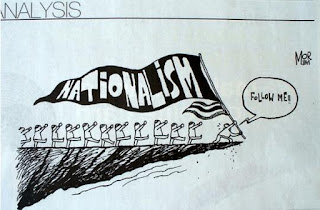 Even though I'm not an expert on the situation in Hungary I do know a thing or two about the issues in other South Eastern European countries, where a similar situation is arising. They suffer from the same misbalances, and the same hostile environment towards capitalism and businesses. The only difference between Hungary and some of the Balkan countries is that at least Hungary didn't undergo a devastating war 15 year ago. The relative underdevelopment of the banking and financial system in the Balkans prevented them from experiencing the same financial blow during the 2009 credit squeeze as Greece and Hungary did. Crony capitalism has been a dominant system in the Balkans for over two decades. It’s only a matter of time before it starts producing the same malign consequences as it did in Hungary and Greece. The only problem is, Balkan radicalism is far more dangerous.
From the Eastern point of view, the situation in Western Europe isn’t half that bad. Just a reminder that it can always get worse if we’re not careful.
Crony Capitalism Financial Crisis Hungary Political economy