November 07, 2011
Last week saw a new idea sprung into economic discussion focused on restoring economic growth – it was proposed that the US Fed should adopt a target growth rate of nominal GDP to 4,5%, or in short NGDP targeting. Nominal GDP is GDP measured with current prices (in a given year). Since it is hard to compare market values of GDP in current prices from one year to another as the value of money changes, economists adjust this nominal value of GDP by including inflation. Therefore, real GDP is nominal adjusted for inflation (or simply GDP measured with constant prices in a given year). 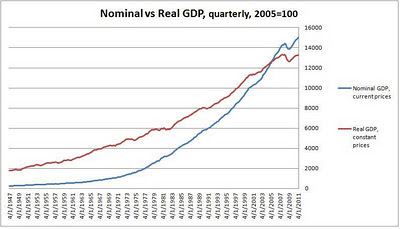 On the given graph I compare US nominal and real GDP from 1948 to 2011, using quarterly data, base year 2005. The difference between the two should be obvious from the graph – dollar value of goods and services in the 60s or the 70s isn’t the same as the dollar value today (i.e. in 2005). It is much less and hence nominal GDP has lower values than real GDP. Also, every nominal GDP after 2005 shows a higher value than real GDP because prices rose making the total value of goods and services bigger in terms of current prices.

The following graph looks at the difference between the two in terms of inflation. 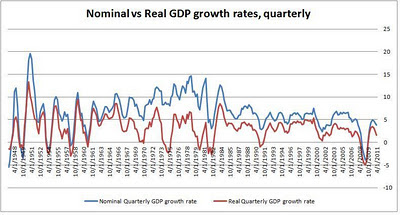 This is important to know when evaluating the NGDP targeting policy proposal. The idea itself came from Goldman Sachs earlier last month (and even before that from Scott Sumner, who calls himself the biggest advocate for it on his blog), and again last week from Christina Romer to Fed Chairmen Ben Bernanke. The idea calls for a rule that should allow the Fed to target the 4,5% nominal GDP growth rate - so if the normal real growth rate of the economy is around 2,5%, the Fed inflation target is 2%. The problem is, currently the US isn’t growing at 2,5%, and it isn’t likely to reach this via NGDP targeting either. Essentially it is a licence to the Fed not to worry about inflation, thereby completely ignoring its main task of achieving price stability.

The idea can literary translate to the following: If the Fed prints more money, this drives up prices (the classical causal relation in monetary economics where more money in the economy makes it lose its value and triggers an increase in prices as people now need more currency to buy the same goods as before). Higher prices of goods and services will increase the GDP measured in current prices (nominal GDP). This is an easy way to reach the target without increasing real growth at all. For the current 1% rate of real growth the Fed may pump up inflation to 3,5% in order to reach its target. But this doesn't mean the economy grew at 4,5% - it's real growth is still weak.

If this is indeed made the rule, the Congress will expect the Fed to follow it closely. However, due to an inability to start up economic growth with current methods, the Fed will have no option but to raise current prices in order for the nominal GDP to reach its target level. Not to mention that by doing so the Fed will have an excuse to use more quantitative easing which will further devalue the dollar. This is one of the arguments in favour of NGDP targeting as the Fed will now claim it is using quantitative easing to reach its target NGDP growth rate, and it is assumed expectations will translate from high inflation expectations to higher growth expectations (nominal at least). Most people stand firmly against QE as they see it as an unnecessary inflation boost or a way to ‘monetize the national debt’, however, now this will be ‘adjusted’ as expectations will be focused on NGDP growth instead of inflation. Since now the reasoning is that this might be the policy needed to bring back confidence in the economy. Also, proponents of NGDP targeting point out how such a policy is very effective during a liquidity trap, which the economy is in currently.

Some proponents of NGDP targeting say that it could be a better policy than inflation targeting as this way we will “kill two birds with one stone”. If real growth is say 2,5%, the Fed would only have to keep inflation at 2% (which is coincidentally a long term inflation target). If there is an increase in food or energy prices (such as the one we’re experiencing now) that will drive up inflation and under an inflation target other prices will have to fall. Under sticky wages this would decrease employment and decrease demand. However, under a NGDP target, the Fed could allow for a temporary inflation increase above 2%, and thus eliminate the necessary negative consequences on demand and output. But inflation is already well above 2%, reaching 3,8% in September, and since growth is expected to be 1,6 % this year, isn't the target already reached? Even overshoot perhaps.

Inflation targeting has its flaws but at least it sends a credible signal of future inflationary expectations to consumers and businesses. It makes a central bank credible in the eyes of the nation which is an important condition to achieve price stability.

The Volcker moment? Not quite

Romer’s comparison of NGDP targeting to the Volcker moment is somewhat paradoxical since it is well known that by slashing interest rates Paul Volcker reduced inflationary expectations severely and set stage for the Fed to be considered a highly credible institution in keeping inflation low. Some claim the Great Moderation to be a partial consequence of the Volcker move to cut interest rates and control inflation, even for the temporary price of the loss of employment. In the long run employment, of course, recovered.

Sending a signal to expect higher inflation due to the nominal GDP targeting is exactly the opposite of the Volcker moment.

The main issue behind Volcker’s inflation targeting was credibility of the Fed that it will reach its target. If this would be the case with NGDP targeting Mr Bernanke will have to strive to keep the target by increasing inflation due to low growth rates in the economy currently. Expectations of higher growth could arise but so will expectations of higher inflation. This might annihilate everything done by Mr Volcker to establish the Fed as a credible inflation-hawk institution and return the US in the volatile 70s inflation (see the second graph – notice high levels of inflation in the 70s, up until the Volcker moment in 1981 when inflation targets took place. It had a significant effect on the decreasing demand and GDP growth but its end result was easing inflation volatility and credible expectations of future inflation).

Ultimately, the Fed should only be left to worry on the stock of money in the economy and setting interest rates through which it is able to curtail inflation and impose price and long-term interest rate stability. Any goal exceeding this main goal will provide a trade off to the Fed where more money in the economy and higher inflation would trigger nominal GDP growth, without a necessary increase in real GDP growth. Furthermore, I can’t see the causal relationship of why a NGDP target will increase real GDP growth. Expectations are not going to be enough to start it up. Restoring confidence will.


Update (21/04/2012): I stumbled upon this interesting webpage called NGDP.info summarizing all you need to know about this increasingly popular monetary policy. I still think it won't do any good in the current recovery and that it's final effect will only be higher inflation and a reversal of everything Volcker did in the 80s.
Confidence FED Inflation NGDP targeting Recovery USA