November 18, 2011
After the initial identification of the causes of eurozone contagion in domestic and foreign instabilities, having in mind the current debt situation we now look at how and why the banks got incorporated into the peripheral contagion, which led to further systemic risk, and finally, how did the collapse take place after a sudden credit stop.
How the banks got caught up buying peripheral debt?
As was already noted in this blog, eurozone banks were buying the peripheral debt as part of their zero risk-weighted assets. While the regulatory requirement on holding a corporate loan was 8%, the capital requirement for holding sovereign debt was just 1,6% (sovereign debt, considered to be a zero risk asset was given a 20% risk-weight, resulting in the total 1,6% of capital requirement for sovereign bond holdings). This meant that if a bank was to lend to sovereigns instead of businesses it could make much more money (leverage on sovereign bonds was 62.5 to one compared to leverage on business loans of only 12.5 to one). This created a huge incentive for the banks to increase profitability. It opened a whole new area of investment, similar to what the recourse rule did for the mortgage market in the US.
Accusing the bankers of being greedy based on their huge holdings of MBSs and/or peripheral sovereign debt can only be done by someone who doesn’t understand the elementary principle of business economics (or microeconomics) – businesses use scarce resources to maximize their wealth, i.e. their profitability. Companies are motivated by profits, it is what drives them forward, it is what drives economic growth and it is what drives capitalism to succeed as a system.
Banks, just like any other private business, will always look for ways to increase its revenues and minimize its costs and risks. By investing into sovereign debt they were doing just that, reducing their exposure to risks, minimizing costs of lending and maximizing their profits. They were following the Basel accords whose initial idea was to make banks safer and more prudent, but through guiding their investments and creating new demand for assets they yielded the exact opposite result of what they were aiming at. The regulatory paradox is once again evident. By recognizing Greek debt (for example) as a safe asset, they artificially increased demand for this asset. An artificial increase of demand resulted in too high exposure of EU banks to Greek debt, which is the reason behind a particularly delicate situation regarding the Greek default, as most private Greek debt holders are EU banks. It is their bancrupcy and/or nationalization, not the default itself that may prove to be the trigger for another depression.
What was the end outcome of an artificially created demand for peripheral debt? It made it easy for the governments of these countries to borrow to fund their populist, electoral winning policies. It worsened domestic fiscal balances of these countries and worked towards increasing their debt levels. Higher debts in Italy and Greece were evident even before the crisis. The Basel accords only further endangered the fiscal positions of these countries and haven’t worked at all towards decreasing the systemic risks for their banks.
The collapse 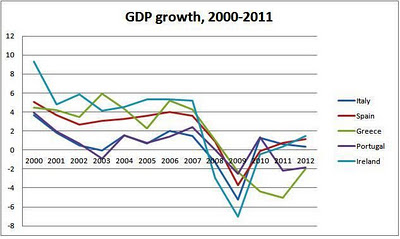 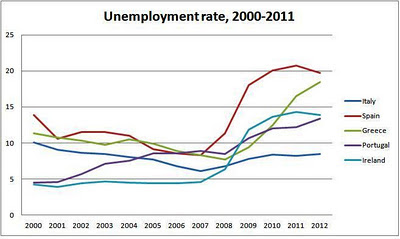 Source: IMF, World Economic Outlook, September 2011. The data for 2012 are estimates.
The sudden credit stop was a result of a recession spreading from the US. As was described previously, a banking crisis in the centres of world finance (New York, London) yields a credit squeeze on the international market, and a severe decrease of investor confidence. As a result emerging market economies and economies dependent on foreign lending to finance its consumption find it much harder to borrow on the international market and see their bond yields rise and their debt harder and harder to service.
This was an inevitable scenario for the eurozone peripheral countries. A stop of borrowing from the core eurozone countries such as Germany, triggered by the US financial crisis, exposed the depended peripheral countries to the threat of default. Fiscal deficits and rising public debts acted as a signal to investors to exit from eurozone peripheral debt and the yields started rising. Even though the current account deficit proved to be the leading reason behind the countries respective bubbles, investors usually make the decision to buy government bonds based on whether the government will be capable to service its debt obligations and pay out interest, i.e. to stay solvent in the future. As soon as they see a rising fiscal deficit and more and more debt pilling up the probability of staying solvent decreases and the country's debt becomes a more risky investment.
However, the cases of Ireland and Spain were somewhat different. As stated previously they were running a real estate boom, much like the one in the US, and suffered an immediate impact of deteriorating housing prices and loss of construction jobs. The construction and housing industries carried a lot of employment so when the building boom stopped and turned into a bust, employment soared down in both countries (see the second figure and observe the rapid increase of unemployment for both these countries in particular).
In his text in the New York Times in January 2010, Paul Krugman recognizes the start of troubles for Spain and Ireland through a large fiscal deficit that arose due to a severe decrease of revenues since tax receipts were mostly depended on real estate transactions. As was shown previously, the government debt levels of Spain and Ireland rose particularly high after the bubble burst on their housing markets. Furthermore, as unemployment rose, so did the costs of unemployment benefits, which led both Ireland and Spain from a budget surplus into a huge budget deficit.
In addition, Krugman adds, guarantee on bank debts by the Irish government increased the Irish debt substantially and brought its own solvency into question. All this worked further in decreasing investor confidence regarding the eurozone situation and the result was even more short-selling of peripheral government debt and higher yields and spreads over the German Bund.
Loss of confidence further crippled any Keynesian solution of spurring big money into the economy. No matter how much liquidity was being pumped in the system, no one would use it to increase lending and businesses lost support. As opposed to American companies eurozone companies are much more dependent on bank loans to fund their business (80% of EU companies compared to only 30% of US, accordingto the FT). It is obvious how a lending freeze and reluctance of banks to lend further due to their increased contagion from enforced exposure to peripheral debt resulted in severe consequences for the real eurozone economy.