November 25, 2011
The final part of the eurozone causes and consequences analysis deals with the outcomes of the sovereign debt crisis and how it now threatens to spread contagion back to the rest of Western world and undermine the current sluggish recovery.
The summary and suggestions on the eurozone sovereign crisis and the critique of the policymakers responses were analyzed on this blog previously and can be found here and here.
What were the outcomes?
Italian bond yields. Source: Bloomberg 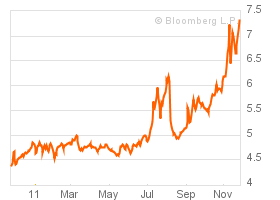 In the last year every peripheral eurozone government was kicked out of office. Portugal and Ireland changed governments earlier in the year, Italy and Greece most recently got technocratic governments, while Spain held elections this Sunday and saw the victory of the conservatives announcing cuts and fiscal responsibility. The political implication of the crisis was huge, and naturally the politicians needed to pay the price. Governments such as Italy’s Silvio Berlusconi who managed to avoid being removed from office for a decade (apart from a brief 2 year period) has finally seen his political career finished. It wasn’t the corruption or reckless behaviour, it was the European bond markets that brought down the peripheral governments. And the very same bond markets are threatening future recovery and the  existence of the eurozone and its currency.
The bond yield spreads in the eurozone have been relentless in punishing incompetent governments and they were right to do so. The governments failed to adopt necessary reforms and were thus removed from office. They were supposed to restore investor confidence and set a stage for economic growth. In stead they lacked a proper soulution and were avoiding the necessary reforms afraid of losing popular support. On the other hand, The ECB refused to act as lender of last resort as it insists it cannot replace the governments in restoring investor confidence. The markets reacted as they should have - via rising bond yields.
Higher bond yields (or spreads over the German bonds) simply reflect unsustainable public finances of its issuers. Investors don’t believe that the issuer will be able to service its liabilities in the short run and the costs of borrowing rises. The real danger is when the bond yield spread rises above 500 basis points. This implies higher costs for debt holders in the form of margin requirements (collateral payments made when bond prices fall) and could lead to a further cycle of higher and higher yields. This is what happened to Ireland before its bonds were given a “junk” investment grade.
Italy has already jumped through that spread and Spain is close enough. The danger is higher and higher costs of borrowing and more illiquidity for these countries that will inevitably lead to their insolvency. 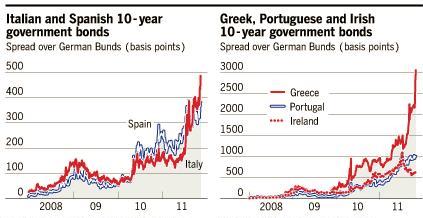 Source: Financial Times, Martin Wolf: "Thinking through the unthinkable"
Double dip?
According to the latest data on economic growth and forecasts of future growth the double dip recession has arrived. Even though the data for October and November haven’t been taken into account (months that showed largest instabilities), there were signs of decreasing growth, probably due to expectations of future instabilities. One can rightfully conclude that another recession is here, and this time the cause is political. The inability of the politicians to reach a plausible conclusion on how to resolve the crisis of confidence in Europe is appalling. The rise of bond yields in Italy, Spain and France, and the lack of liquidity for German bonds is a natural reaction of the markets to political incompetence. Rather than focusing on policies to restore growth and stick to a credible debt and deficit reduction strategy, the politicians continuously choose temporary short-term fixes. The markets can only bear these to a certain extent. The best proof is the signals after the Berlusconi exit in Italy – even though most of the politicians expected a stabilization on the debt market, it surprised everyone by having Italian bond yields jump above the “unsustainable” 7% boundary. It shouldn’t have come as a surprise, though. There is nothing the investors can think of that will make them feel safe. Higher bond yields for Italian debt is an effect of no recovery. Things are still too uncertain, despite the technocratic government. When they devise a credible plan on how to reduce Italy’s huge debt burden and how to restore economic growth, which might take years, then Italy can finally see a decrease of its yields and easier financing. Italy is on a brink of another recession the former government drove them into, and investors are hence losing confidence. The more time it takes PM Monti to design a credible growth strategy and to resolve Italy’s high corruption and public sector problems, the harder will it be for them to borrow on the international markets.
Concluding words on the eurozone debt crisis
The eurozone debt crisis was triggered by misusing the welfare state to fund electoral victories by advocating populist policies under the idea of social justice. Populism, described by white elephant projects and pork-barrel spending, can never create sustainable wealth. It can only lead to an inevitable disaster and higher social injustice which can trigger social turmoil.
The political economy implication in the eurozone debt crisis is huge. The causes lie within several factors; large CA deficits due to the introduction of the euro and a misguided idea on how it was supposed to work, internal instabilities that used cheap borrowing to fund populist policies, a US crisis that lead to a sudden credit stop which emphasised the domestic instabilities, and finally a regulatory system that steered banks' investments into sovereign debt which caused the threat of default to be far greater than it usually is.
Two solutions are available; either the ECB enters the market a lender of last resort and monetizes debt, which might lead to hyperinflation – a strategy Germany strongly opposes, and rightly so, or we might see serial defaults of certain eurozone countries. This was obvious three months ago and it is obvious now. However, during all this time no credible solution was proposed and the position of all these countries and the eurozone itself became unbearable. Unlike the recession in 2008 triggered by Lehman, this one will be triggered by the severe loss of confidence in the bond markets caused by political incompetence.