November 10, 2011
In the next few days I will publish a series of blog posts about the causes and consequences of the eurozone crisis. I will cover the potential reasons why the peripheral eurozone economies suffered a particularly hard hit. The political responses and potential remedies to the eurozone crisis have been published in two previous posts. After publishing all the blog posts, I intend to make a separate page on the eurozone crisis. The topic itself will probably continue for some time as the situation around eurozone currently carries the highest risk for another recession, and so will the page on the crisis be updated.
Causes of the eurozone contagion
The focus of the first few blog posts will be on the spread of financial contagion onto the peripheral eurozone economies, which include Greece, Portugal, Ireland, Italy and Spain. The reasons why these countries in particular found themselves in such troubles can be separated into three features which they all share. The first are specific local instabilities and the way these peripheral countries ran their economies in the wake of the crisis. Even though each of them was characterized by specific conditions and some are more different than others (for example Ireland and Spain experienced a housing and construction boom, while other countries were exposed to different, more structural imbalances), there are certain similarities that drove to instabilities.
The second common characteristic was the introduction of the euro. With all its benefits, the common currency brought with itself some negative characteristics that became visible once the crisis fully sprung. In particular, due to a common currency it became cheaper for the peripheral economies to borrow on the international market which induced large current account deficits. They became dependent on credit from abroad and once this credit flow stopped the stage was set for the spread of the crisis. They found themselves in a typical sudden credit stop, usually a characteristic of emerging economies, which is partially why the phrase ‘peripheral eurozone economies’ was coined.
And third, what brought to the sudden stop of credit worsening their fiscal balances was the spread of outside contagion, particularly from the US. The financial crisis that started in the US quickly spread worldwide through decreasing trade, loss of investor and consumer confidence and a credit squeeze. All this made it harder for the peripheral economies to borrow on the international markets, and since their economies became dependent on cheap capital abroad to finance its consumption and government expenditures, the credit squeeze proved to be particularly painful. Outside contagion brought the instabilities of the eurozone economies onto the surface.
Apart from these in common to all of them, Greece and Italy had an additional constraint – corrupt politicians which cared more of self-preservation than the well-being of their country (needless to say all politicians are rent-seekers, but some tend to misuse their power much more than the others). Their politicians used expensive populist policies to remain in power. They used cheep borrowing on the international market to “fund” their electoral victories by broadening its welfare states and offering concessions to particular electoral groups. They “bought” votes by increasing pensions, hiring more public sector workers and increasing their wages in order to create a perception of high employment. Their governments were perfect examples of how the inflow of foreign capital was used inefficiently to finance consumption and maintain power.

Regarding the first cause there is a prevailing opinion that all these countries acted recklessly and fiscally irresponsible so they must now pay the price of austerity in order to set their economies straight again. The main argument is that these countries ran large fiscal deficits and large government expenditures. They were borrowing cheep and used this money to live above their means. The inflow of foreign capital fueled the economies beyond what they were capable of.

Here is a graph that looks at the output gap as a percentage of potential GDP for the five peripheral nations. 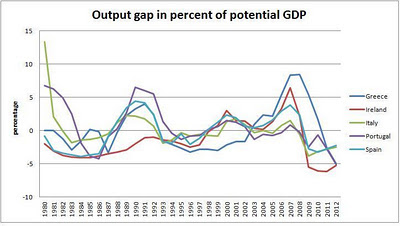 The graph shows that Greece for example had a GDP growth substantially above its potential level previous to the crisis. This is a good indication that the Greece economy was in fact overheating. Its rapid growth rise was fueled mostly by large capital inflows (which will be show later).
Ireland and Spain experienced a similar output gap well beyond its potential level. Unlike Greece, the driving force of their high growth were the asset price booms in housing and construction.
But the other two countries, Portugal and Italy grew within their potential levels, and weren't overheating as much. Nevertheless, they found themselves in similar structural problems as the three countries above.

The following graphs look at each country's CA deficit compared with the level of gross government debt. 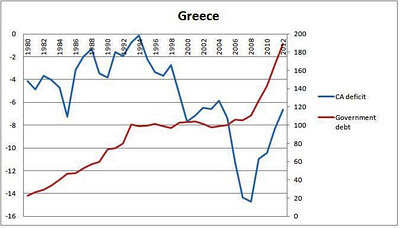 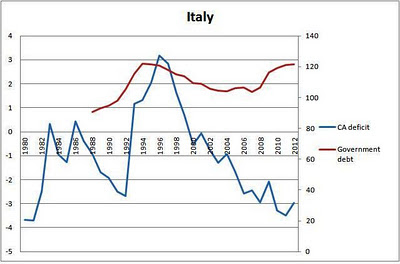 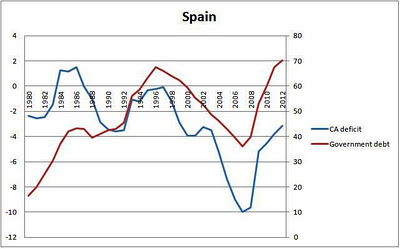 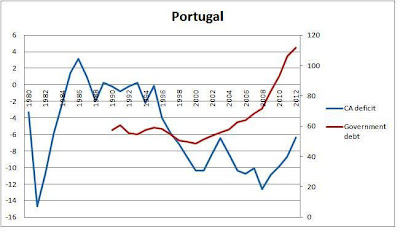 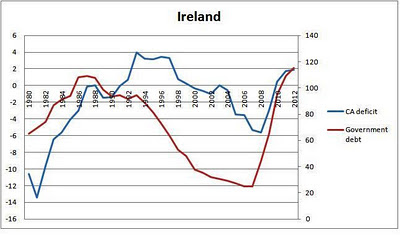 
Even from a brief look at the graphs it is obvious what all the countries have in common: right before the start of the crisis, and mostly from the introduction of the euro, they have all experienced rising current account deficits. Even though Greece didn't have a CA surplus for over 30 years, Portugal, Spain, Ireland and Italy in particular all experienced CA surpluses at some point prior to the euro. Ever since the introduction of the euro, the CA balances started to decrease.

Government debt increase, on the other hand, fails to give such strong implications.  Spain and Italy were actually decreasing their government debts and improving their fiscal positions, while Greece kept it steady. They all only saw an upsurge of debt once the crisis started due to bailouts (Ireland) and a decrease of revenues (in Spain and Ireland the construction industry was a significant contributor to revenues; their losses and bankruptcies reflected severely on the countries' budgets).

Therefore, domestic imbalances weren't as crucial as imagined. Some instabilities certainly did exist, but they couldn't have caused a crisis so severe. It is more likely that outside contagion combined with dependence on foreign capital outflows exaggerated the systemic risk of each country. Domestic imbalances became more visible once the foreign inflow of credit stopped.