July 16, 2014
In last week's issue of the Economist there is an excellent piece linking the usage of ideology in political rhetoric and rampant corruption. Kleptocrats like to (need to) use ideology to either justify their political goals or to distract voters from the real issues at stake or from their corrupt activities.


They use the example of two leaders who enjoy expressing their autocratic power over their respective countries, even though they are formally presiding over democracies. You might have guessed it - they use Russia's Putin and Turkey's Erdogan as examples (in addition to China's corrupt ruling elites). Both of them like to present themselves as leaders which can bring back the glory to their once great nations. They use conservative ideology to establish themselves (albeit unsuccessfully) as moral high-grounds in their countries, while at the same time their cronies continue without any restriction to expropriate their nations' wealth.

This could easily be any political leader in any country. To the two of them I can - of the top of my head - add dozens of countries and their respective leaders, both current and past. They don't even have to be developing countries' dictatorships. How many times have you seen political elites use moral, religious or nationalist arguments to justify controversial laws and decisions, while at the same time they are directly fueling (and striving upon) bigger and bigger cronyism? I dare you to name a country which didn't have at least one leader that successfully used ideology (left or right) to hide his or her corruption.

Here's a passage from the text: 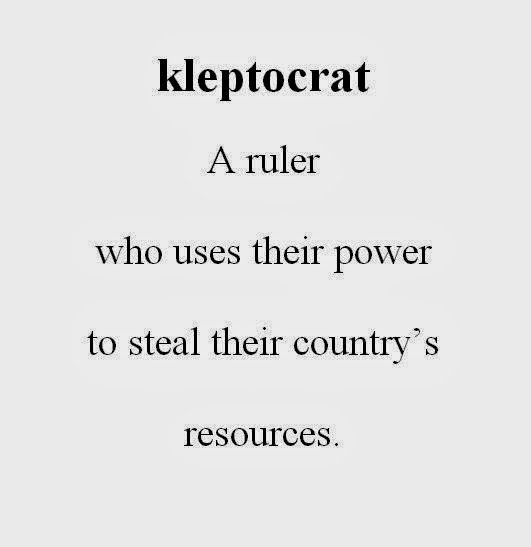 "Every country has its charlatans and rogues, be they light-fingered British MPs or pork-happy American congressmen. Many, whether Latin American strongmen or African kleptocrats, claim to serve their people. Hardly any admit to thieving. But there is something especially grating about leaders who push moralistic causes, thus inviting judgment of their own behaviour, while overseeing scams. Casual observers may wonder why citizens put up with the hypocrisy—and how their rulers look at themselves in the mirror."

Whenever you hear of such examples, the economic voting part of the story is always the same: such leaders tend to lose in urban centers but win in rural ones. They lack in support among educated voters, but gain among poorly educated ones. So you get a situation that the rural, uneducated population, usually of lower incomes on average, tend to vote for the conservative party (or some national-socialist variety of it), since they tend to favor ideological issues over economic ones. The propaganda makes them believe that national unity is what's important for their country's progress. It's not. It never was.

The ideological issues tend to range from country to country; it can be the sorrow over the destiny of a once great nation (a common argument for our two protagonists), it can be religious issues, foreigners taking domestic jobs (which triggers an anti-immigration movement), foreign companies extracting profits from the domestic population (which triggers the protectionist argument), and it can even be gay rights. Everything is more important than the people's economic misery. Especially in times of prolonged crises when the people psychologically tend to be more open to radical ideas; ideology triumphs over economic reason.

And the result is obviously that radical ideas get more political clout. In more democratic countries this gives unexpected power to certain extremist parties, but in more autocratic countries (regardless of their de jure definition) the elites on top don't miss an opportunity to use this anger of the people to their benefit. The people no longer blame the elites for the fact that they haven't allowed any of the economic benefits during the good periods to be shared among the people. Their leaders' propaganda makes them blame globalization, "neoliberalism", the Western elites expropriation of their countries' wealth (which results in nationalization of some former public companies), or even the Western culture that seems to have shattered the domestic cultural values and led to greed and lack of social trust (arguably the most ridiculous argument).

But regardless of how ridiculous the arguments tend to be, they work! People 'buy' it. The leaders succeed in increasing their support - unless some random event messes things up, such as the Tahrir square protests did to Erdogan. And interestingly enough it actually comes down to such random events to disrupt the power of the mighty autocrats. The protests of last summer haven't yielded any real effects (in none of the countries did they change their corrupt leadership). But they've certainly destabilized their power. For those countries only time will tell of how much longer will the voters 'buy' these arguments, and will they finally vote by their pockets instead of their propaganda-evoked emotions.
Corruption Crony Capitalism Democracy Institutions Philosophy Political economy