November 15, 2011
Here's something to keep it interesting while waiting for the next few posts on consequences and the remedies of the eurozone crisis.
I 'borrow' this figure from the Economist, depicting debt burdens of eurozone economies: 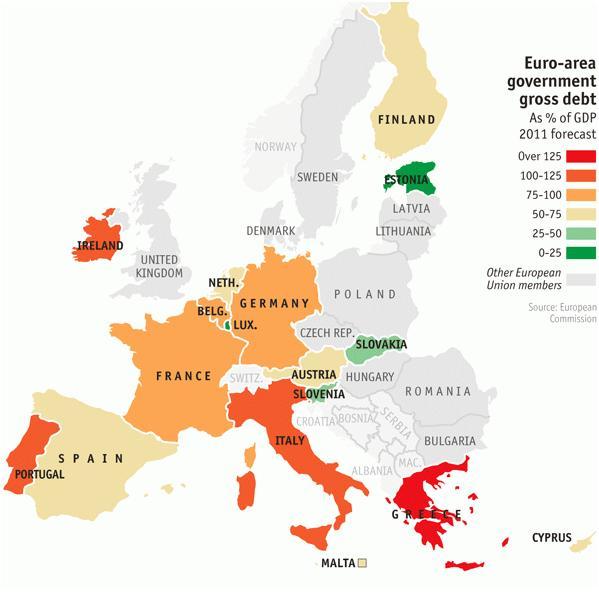 
The graph serves as a good reminder on importance of debt levels and the sustainability of these debt levels on investor confidence and country bond yields. Greece, Italy, Portugal and Ireland (4 out of 5 countries analyzed previously) are countries with the highest debt burdens in the eurozone and are the countries most exposed to the threat of default.
In addition to this I would like to stress out the mechanism of outside contagion described excelently by Reinhart and Rogoff (2009) (I summarize their main findings on the spread of contagion throughout the world financial system):
Reinhart, Rogoff (2009): "This Time is Different: Eight Centuries of Financial Folly" Princeton University Press


There are striking similarities with the case of the eurozone economies described previously. The only difference is that they didn't depend on commodity prices to drive their exports, but the credit squeeze and the dependence on credit from net lenders forced them into a situation where they were unable to service their debts anymore, and their economies contracted. Now, due to a severe decrease in confidence they find it hard to borrow on international markets and are entering into an even higher dependency on foreign aid from either Germany, the ECB or eventually the IMF (in the emerging markets case, it's usually only the IMF who comes to the rescue).
Debt Eurozone Financial Crisis Graph of the Week