Last year in the UK there was a lot of fuss about the Royal Wedding in economic and political circles.

It was led to believe that because of an extra bank holiday for the Royal Wedding last year, and for the Diamond Jubilee this year, the economy slipped back into a recession. An extra bank holiday was apparently the reason why the second quarter of 2011 had negative growth (-0.1%, see graph below). And it will probably be why the UK will have a negative growth in Q2 2012 too, making it three consecutive negative quarters.

If only the British were working on those days, everything would have been different. Instead of a -0.3% drop, the UK could have grown by, say 3% that quarter. What a missed opportunity. Note: the 3% was an estimate based on no data at all, just my personal opinion, which makes it as imprecise as any forecast you could see that blames things like the Royal Wedding for a re-occurring recession.

I’m waiting for the next logical step from UK policymakers – to make the people work on Saturdays and Sundays in order to mitigate the effects of the Royal events. That ought to make the economy grow.

In fact, I have an even better proposal; since we’re in a recession why not make every week a 7-day working week for everyone! First, it would ease the inequality pressure a bit, and second it would spur growth well over the previously estimated 3%. If you want a Chinese-style bounce back of a 9% growth, than working weekends is the way to go.

But seriously, when forecasters of economic activity design their models they never stop to think beyond the one-non-working-day parameter. Didn't anyone consider the amount of tourists that came to London for the Royal Wedding, and that will arrive for the Diamond Jubilee? People have stayed in London for more than a week in those days. The hotels were full and made a bundle. The airline companies made money, Transport for London made money (the tourists did need to buy tickets amid the congestion they’ve temporarily caused), shops sold more stuff, tourist attractions sold more tickets, and some money even went to the non-taxpaying parts of the economy. A lot of money was left in the country and will be left during the next couple of months.

This isn’t an explanation of the recessionary quarter(s) and anyone in power claiming that it was is simply hiding his or her own incompetence for being unable to achieve a recovery.

In the end, it’s not how many days in a week people work, it’s how much value an economy can create. This is where the UK is lagging behind. And it won’t fix it with giving businesses extra money but by giving them an equal, unconstrained opportunity to compete and succeed. And it certainly won’t fix it by abolishing Royal events that can actually attract people to come and spend their money in this country.

As soon as you know it, the Olympics could be called off because it could cause massive delays to people coming in and out of work. What a tragedy for the economy. I’m guessing it will cause a massive amount of stress making the people perform sub-par throughout those 8 weeks. It’s no telling what this could do to the economy. Brace yourselves, not because of the Eurozone collapsing, rising energy prices or a hidden threat of inflation – no – brace yourselves because there’s a Diamond Jubilee coming. 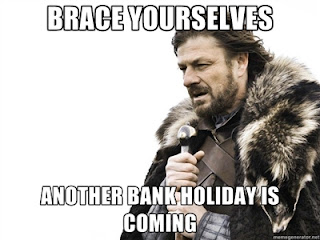