Graph(s) of the week: The year in review

December 26, 2013
The Economist ends the year with a series of eye-catching charts characterizing the state of last year's recovery.


We are all still aware of the recovery being a slow and painful one (in some places more than in others), but what's even more interesting is that some of the negative effects of a poor response to the aftermath of the crisis are already being visible.


For example, in the private sector stock indices are booming, but corporate debt issuance is higher than ever, as the companies are taking advantage of the historically low interest rates and using this mainly to refinance their debts (see graphs below). Interestingly enough, the stock market indices are far above their pre-crisis peaks. Many like to point out that this is a signal of another potential bubble rising on the stock market, but I would beg to differ. 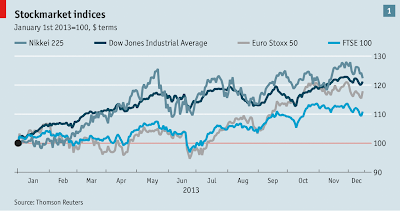 The Dow is higher than its 2007 pre-crisis peak, but so is the US GDP (see below). Does this mean the US has by now completely recovered from the financial crisis? Not really. It is simply following a new trajectory, a new trendline, or to be completely precise, it is on a new (lower) potential output path. The stock market is noting but a reflection of this. That's why I wouldn't call it a bubble.

The same thing, however, can't be said for the potential monetary policy bubble. Low interest rates combined with massive QE are still mainly reflecting on the banks' balance sheets and are not entering the private sector as fast as the policymakers are hoping for. However, the question is what will happen when all this money does enter the real economy? If we continue down the path of a "lost decade" then the answer is probably nothing. At least in the short run. 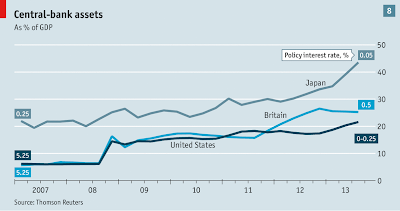 On the other hand the losers seem to be the SMEs where loans (as % of GDP) are still falling: 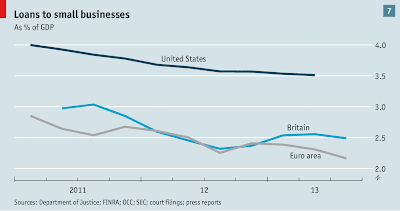 Too bad the policymakers aren't making it any easier for them to rebound.


On the other hand fiscal policy has had partial success - depending on how we define the goals of fiscal policy. The austerity package has at least succeed in curbing the budget deficits: 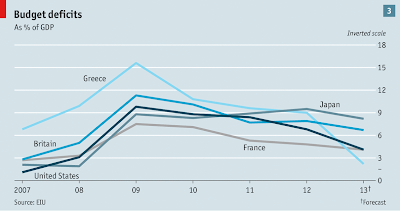 But the wrong way of conducting austerity (via mostly tax hikes without reforming the spending side) means that unemployment is still a huge issue for the developing economies: 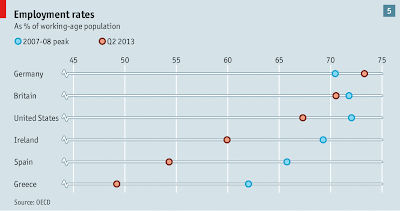 Maybe Richard Koo is right, maybe this is a typical "balance sheet recession". It certainly has all the symptoms. That would mean that by continuing with the current type of policy responses we really are in for a lost decade of the Japanese type. Or maybe even a few. Just look at the UK.
Austerity Debt Financial Crisis Graph of the Week Recovery