January 17, 2014
This week, the Economic Policy Institute, a liberal (left-wing) US think tank, has released an open letter to the US President Barack Obama and the leaders of Congress in which they urge the government to raise the minimum wage. In total 75 US economists have signed the letter, including Nobel laureates Joseph Stiglitz, Kenneth Arrow, Eric Maskin, Peter Diamond, Robert Solow, Michael Spence, Thomas Schelling and a number of other notable economists such as Larry Summers, Emmanuel Saez, Dani Rodrik, Daron Acemoglu, etc. These are some very respectful names in the field, and when a group such as this one signs a policy proposal, one should hear what they have to say.


Their idea is the following: an increase in the minimum wage would benefit the economy as a whole, causing not only a direct increase of wages for 17 million workers, but also spillover effects to other workers as the employers would "adjust their internal wage ladders". Consequently this would boost their purchasing power and raise consumption and hence aggregate demand. Here are some excerpts from the letter [emphasis mine]: 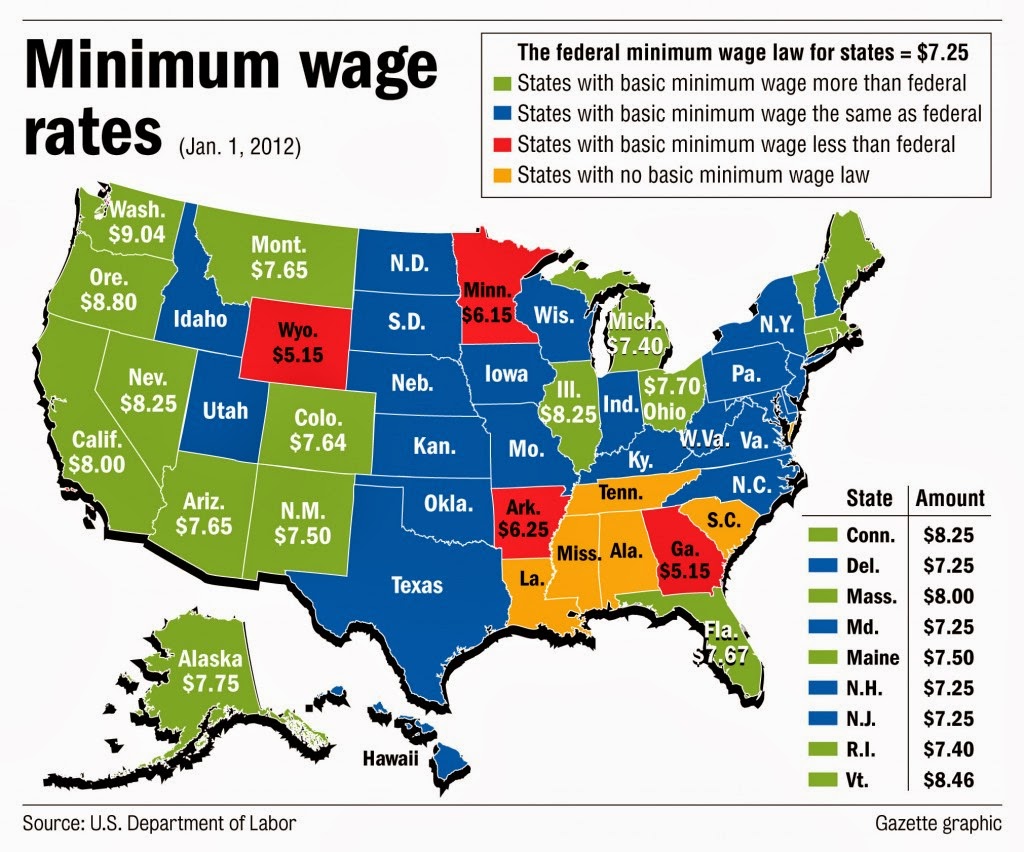 ...This policy would directly provide higher wages for close to 17 million workers by 2016. Furthermore, another 11 million workers whose wages are just above the new minimum would likely see a wage increase through “spillover” effects, as employers adjust their internal wage ladders. The vast majority of employees who would benefit are adults in working families, disproportionately women, who work at least 20 hours a week and depend on these earnings to make ends meet. ...

And the most interesting part:

...In recent years there have been important developments in the academic literature on the effect of increases in the minimum wage on employment, with the weight of evidence now showing that increases in the minimum wage have had little or no negative effect on the employment of minimum-wage workers, even during times of weakness in the labor market. Research suggests that a minimum-wage increase could have a small stimulative effect on the economy as low-wage workers spend their additional earnings, raising demand and job growth, and providing some help on the jobs front."

I've already covered some of the research that suggests this new relationship (the Card and Krueger, 1994 paper is the often cited one) and have raised several concerns (see my earlier blog post, or my ASI text). Disregarding for the moment some technical econometric issues, the biggest problem I see is the shift in incentives for taking lower-paid jobs.

Even if it's true that an increase of the minimum wage would (temporarily) boost consumption and AD, I worry of the secondary effect it might have on the shift in incentives and the re-specialization of people with higher skills for currently low-paying and low-skilled jobs.

As I've mentioned before, the Card and Krueger (1994) paper looked at fast food restaurants, where increasing the minimum wage made this easily accessible job more attractive than the alternative of investing into gaining more skills and finding another, more demanding job.


The result is a reshuffling of the labour market towards certain types of jobs, rendering some higher paying jobs a lack of skillful employees, while the net effect for lower-skilled workers is negative. It would be interesting to observe the total effect on all industries during the observed periods, not just on one, favourable industry, to prove the employment effect of minimum wages.

Furthermore, some of the research on the minimum wage increases too often suffers from the omitted variable bias problem, where it is hard to differentiate between what why the minimum wage hasn't decreased employment - it could well have happened during a favorable point in the business cycle. A good example is claiming that the 1999 introduction of the minimum wage in Britain resulted in an increase of employment. This is a typical reverse causality problem. Since its introduction Britain's economy experienced a boom decade with rising productivity and declining unemployment, coupled with an increase of labour costs and real wages. It is hard to believe the minimum wage was a cause of all this. If a student were to make this assumption in an econometrics class, he or she would have surely failed the course.

Plus there is a multitude of contradictory research out there, where some tend to find that the minimum wage increases unemployment, while others find no such effect. Neumark and Wauscher (2007) went through the literature and found that the majority of studies reported negative effects of the minimum wage on employment, particularly among low-skilled workers, as did a more recent paper by Baskaya and Rubinstein (2011) from LSE, where they used a time series from 1977 to 2007 and concluded that "a rise in the minimum wage has an instantaneous impact on wage rates and a corresponding negative impact on employment...minimum wage increases boost teenage wages and reduce teenage employment..."

On the other hand there is also a multitude of research claiming otherwise. They seem to have found no significant effect of the minimum wage hikes on employment (in accordance with the Card and Krueger, 1994 paper). Giuliano from Berkely looks at the effects of the 1996 minimum wage increase and finds no significant effects on employment while distinguishing between subgroups of low-paid workers. Dube et al find no effects either, while controlling for local economic conditions.

The point is the research on this topic is far from conclusive. It would be a mistake to use just one side of the argument and claim that the research favorable to this argument is the correct one. The topic is still subject to interpretation and bias, which is why no one can claim to have the correct answer to the question of "does the minimum wage hurt employment?".

All in all, when discussing the minimum wage I am far more concerned with its effects on occupational heterogeneity than on whether or not it hurts employment or boosts AD. If a multitude of research was to be done in this direction, then we could hope for a more precise answer of the total effect of a minimum wage increase.
Economic theory Labour market Unemployment USA