1. Cowen: "Modeling Vladimir Putin", Marginal Revolution blog - of all the texts analyzing Putin's reaction of the Crimea situation, I find this one to be the most interesting.

"Putin lives in a world where power is so much the calculus — instrumentally, emotionally and otherwise — that traditional means-ends relationships are not easy to define. Power very often is the exercise of means for their own sake and means and ends thus meld and merge. Our rational choice constructs may mislead us and cause us to see pointless irrationality when in fact power is being consumed as both means and end. It is hard for we peons to grasp the emotional resonance that power has for Putin and for some of his Russian cronies. They grew up in the KGB, watched their world collapse, tyrannized to rise to top power, while we sit on pillows and watch ESPN."

2. Last week was budget week in the UK. Osborne delivered a new budget focused on a welcomed savings and pensions reform. The 10p tax rate for savers has been abolished, while all restrictions on pensioners' access to their pensions have been removed (thus ending the requirement to buy an annuity), cutting their 55p tax rate. This is surely a move in a welcomed direction. It was also a budget that aimed at helping businesses by cutting their energy costs and via an export-boost scheme. The taxation policies are also likely to be beneficial. Various duties were cut on beer, fuel and energy, while the personal allowance was increased. On the other hand there's been a cap on the rise of welfare benefits for the next five years. There were a couple of blunders as well, where the Help to Buy scheme has been extended in addition to some other short-sighted stimuli policies. See all of the most important measures listed here.

The UK economy is foretasted to grow at 2.7% this year, however the productivity decline is still puzzling. The budget deficit is still an enormous 6.6% for this year, with a predicted deficit of 5.5% next year. However with most indicators pointing at the right direction, optimism has been restored within the coalition government, and the only thing preventing them from securing another mandate in 2015 (when growth is still predicted to be above 2%), is the Scottish referendum (possibly).

3. Of the recent Yellen Fed coverage (see my comment here), these were some of the most interesting comments, ranging from praise to criticism over her being too clear: Financial Times, John Cassidy at the New Yorker, Felix Simon at Seeking Alpha blog, Reuters, Time magazine, WSJ (with a particularly detailed coverage), etc.

4. Back to inequality and poverty: apparently many of the poor Americans aren't actually poor at all according to a new Brookings paper.


"About one-third of American households – around 38 million – live hand-to-mouth, although a majority of them are not technically poor because they have assets, albeit illiquid ones, and they respond to stimulus policies in much the same way as those with no assets."

Does this mean Romney's assessment of the 47% living on welfare was correct after all? 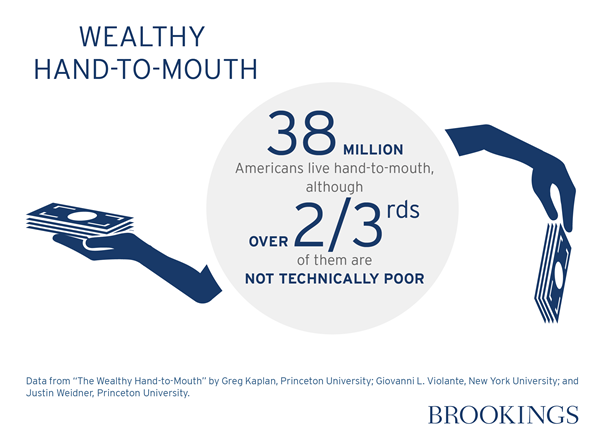