July 25, 2016
The link between income and happiness has been one of the most hotly contested relationships among social scientists. Many researchers from various branches of social sciences have repeatedly denied the existence of a causal relationship between income and happiness (despite overwhelming evidence on how the great rise in living standards was led by the significant increase of post-Industrial Revolution incomes per capita), with the obvious normative conclusion being that having more money is not that important to us after all.

Well it just happens that it is important.


In an article published last month in the New Yorker entitled "The Case for Free Money", the author James Surowiecki (the Wisdom of Crowds guy) makes a compelling case in favor of universal basic income - a policy proposal (rejected in a referendum in Switzerland earlier this year) where every adult citizen of a country would each year receive a guaranteed basic income. In the US this would be equivalent to $10,000. While there are many potential benefits to this idea (as well as some major obstacles - such as it being too expensive), I do not intend to contemplate on the basic income proposal in this post. I will leave that for another time. What caught my attention was the opening paragraph where Surowiecki calls upon a research paper from a Canadian economist Evelyn Forget who examined the effect of a field experiment being done in Canada in the 1970s. Here's the excerpt:

"In the mid-nineteen-seventies, the Canadian province of Manitoba ran an unusual experiment: it started just handing out money to some of its citizens. The town of Dauphin, for instance, sent checks to thousands of residents every month, in order to guarantee that all of them received a basic income. The goal of the project, called Mincome, was to see what happened. Did people stop working? Did poor people spend foolishly and stay in poverty? But, after a Conservative government ended the project, in 1979, Mincome was buried. Decades later, Evelyn Forget, an economist at the University of Manitoba, dug up the numbers. And what she found was that life in Dauphin improved markedly. Hospitalization rates fell. More teen-agers stayed in school. And researchers who looked at Mincome’s impact on work rates discovered that they had barely dropped at all. The program had worked about as well as anyone could have hoped."

I went through the paper and it was indeed a proper field experiment (lasting a total of 4 years): they had random selection of participants, paired control group from the same community, isolated families, etc. In other words, it was legit, making the conclusions of the paper correct. Having more studies and field experiments just like this one would make the case for the universal basic income even stronger (although, the main problem was the lack of money to carry out the experiment further than 4 years).

However, you can't tell any of this from the paragraph above as the author makes an inference mistake. He should have said that hospitalization and schooling outcomes improved compared to the relevant control group. This way a reader might suspect that the research was not done properly if it only looked at the pre- and post-basic income outcomes in that city alone (these alone would not tell you much about the causal relation). I, for example, had immediate doubts about the validity of the research, which is why I had to read the paper myself. But as I said, the paper is legit.

For me the most interesting finding this experiment suggests is that by handing out more money to people, the policy entailed positive effects on their quality of life. The basic income improved peoples' health and social outcomes. In other words, it made them happier. So without any unnecessary quibbles about the existence or non-existence of the correlation between money and happiness, by using basic income experiments we can finally empirically establish a positive relationship between money and happiness. Not directly, as few people enjoy money just for the sake of money, but indirectly, as money helps us attain a better living standard.

My point is, if you advocate universal basic income, don't contradict yourself by saying that money doesn't make people happy. I certainly does. If not directly, than indirectly (just look at the leftist propaganda meme below). For one thing having money means less worries about it. That fact alone improves happiness. 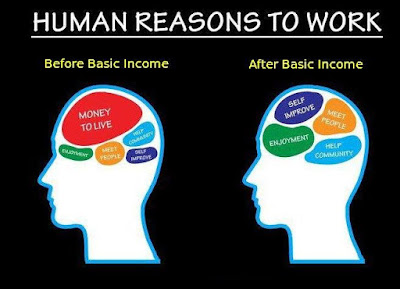