January 30, 2013
Note: This text was also published as an article for the Adam Smith Institute, on 08th February 2013. For the rest of my ASI writings, click here.

Among Keynesian economists there is a resilient opinion on how the current large budget deficits shouldn't be thought of as a serious problem to the economy, since they are ultimately a result of a depressed economy. Here's the main advocate of such an approach, Paul Krugman:

"It’s true that right now we have a large federal budget deficit. But that deficit is mainly the result of a depressed economy — and you’re actually supposed to run deficits in a depressed economy to help support overall demand. The deficit will come down as the economy recovers: Revenue will rise while some categories of spending, such as unemployment benefits, will fall. Indeed, that’s already happening. (And similar things are happening at the state and local levels — for example, California appears to be back in budget surplus.)"

Disregard for a moment the key issue I have with this type of opinion - which is that in a depression a government is supposed to run large deficits in order to jump-start a recovery - let's for now focus only on the argument that a deficit is a result of a depressed economy. What Krugman and the like have in mind when they make this claim is the following; because of the crisis and the credit crunch many businesses fail and consequentially unemployment rises. This creates pressures on the budget deficit, since revenues fall as many businesses are bankrupt and are not paying taxes (on both profits and employee taxes), and on the other hand many new unemployed put pressure on the expenditure side, as the government has to pay out more unemployment benefits. This is all true. All the combined effects of the credit crunch will almost always result in an increased budget deficit. But they will never be so big to make the deficit rise above 10% of GDP as it did in the UK, Ireland or Spain (to mention only a few). Something else was at hand here.

This 'something else' were large government bailouts of fallen banks.

Ireland, Spain, UK and of course the US all had problems with the bursting of the housing bubble, a consequential rapid decline of the construction sector and altogether a huge impact on personal wealth. This however wasn't enough to cause a huge budget deficit. Its persistence is a result of a depressed economy, but the initial cause of the unsustainable public finances in Ireland, Spain, UK and USA were large government bank bailouts. The three European countries are usually the argument Keynesians use to attack the "stupid" euro austerity, since all of these countries had good and stable public finances before the crisis (Greece is a case by itself), while now austerity is hurting their recovery prospects.

However, the enduring pain European countries are experiencing is due to a wrong approach to austerity aimed at closing the deficit only via tax increases and selective cuts, while failing to reform their constraining regulatory environment, their entitlement system, and the rigidities in the labour market.

Claiming that American, British, Spanish or Irish troubles began with austerity is simply misleading. Their troubles began with what was an application of a typical textbook Keynesian solution to a crisis = bailouts and large stimuli. This triggered their public debt to rise and their deficits to widen. Bankruptcies of small businesses and rising unemployment couldn't have single-handedly risen the deficit above 10% of GDP, or the debt-to-GDP close to (or above) 100%. It they did, this would have occurred in a much longer time span. But clear evidence (which Keynesians like to call upon) points out that large budget deficits and booming public debts arose immediately as a result of bailouts and stimuli in 2008 and 2009: 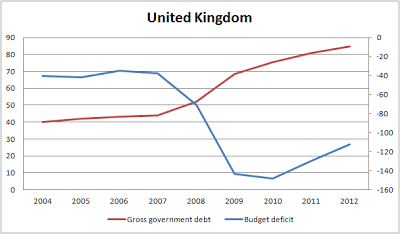 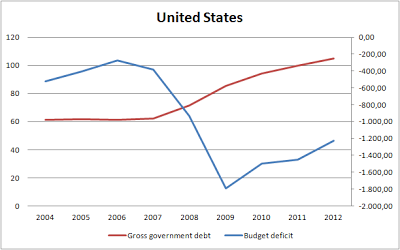 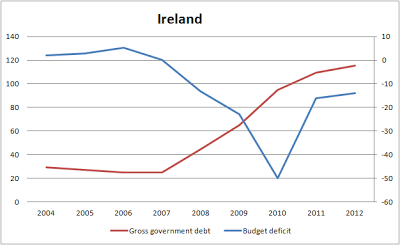 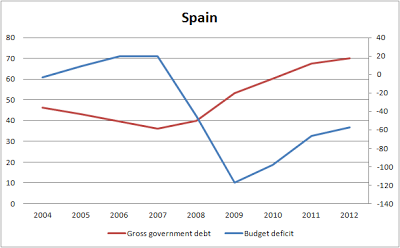 As shown in the graphs, all four countries started experiencing troubles as an immediate reaction to government bank bailouts and fiscal stimuli policies. They all had low and sustainable debt-to-GDP levels (Spain and Ireland below 40% and 30% respectively, UK around 45%, and the US around 60%), which in a few years escalated to close to 90% for the UK, over a 100% for the US, 70% for Spain and close to 120% for Ireland (which is a four-fold increase of debt for this country in only three years). As for the budget deficit, Spain and Ireland had a surplus prior to the crisis, while the UK and the US both had relatively small deficits. After 2008/2009 their deficit-spending bailout solution yielded its first results. Have in mind that in neither of these countries austerity didn't kick in until late 2010. After it did however it did little to improve the state of public finances and still hasn't stopped the rise of public debts in neither of the four examples.

After the evident failure of this approach that caused the unsustainability of their public finances, European countries started to combat the deficit via tax hikes and selective budget cuts, instead of focusing on lowering the tax burden and applying a broad set of institutional reforms aimed at clearing the instabilities of the labour and capital markets.

They made two big mistakes - application of immediate Keynesian policies thought to work in the short run (reminder, this is 2013, five years after the crisis had started - the short run is over), followed by a selective and wrong application of (let's call them) neoclassical policies.

Iceland avoided such a scenario and with help of the IMF got its economy back on track. Latvia and Estonia are similar stories, as they all allowed for the initial strong shock to hit the economy, without applying the so-called textbook Keynesian solutions. Sweden and Germany are another good set of examples to follow on how to avoid deficit-spending and focus on long-run structural reforms.

The obvious failure of the stimulus deficit-spending solution (Raghuram Rajan has a good article on Project Syndicate), particularly with its effect on public finances, should be sufficient evidence not to call for these types of solutions for quite some time.
ASI texts Austerity Bailout Debt Financial Crisis Fiscal Stimulus Ireland Spain UK USA