January 21, 2013
Financial Times has an interesting story on within-government politics, by turning to the example of the 80s British political sitcom, "Yes, Prime Minister". The sitcom revolves around the relationship and conflicts between government ministers and civil servants (bureaucrats), whose main incentive is to preserve the status quo and disable ministers from large and abrupt changes. Much like Niskanen's model of bureaucracy, the bureaucrats are pictured as self-interested utility maximizers, hesitant to change, and maximally engaged into preserving their status and increasing their salaries, perks and office sizes.

"British civil servants have been described as the envy of the world but to many ministers they are little more than a block on their most coveted policy ambitions.

Yes, Prime Minister, the sitcom that personified the devious and obstructive mandarin in the character of Sir Humphrey Appleby, returned to British television this week after a 15-year gap. And, for many ministers, the world it depicts, in which officials prevent them from carrying out manifesto promises and protect the status quo at all costs, is as true today as it was in the sitcom’s 1980s heyday." 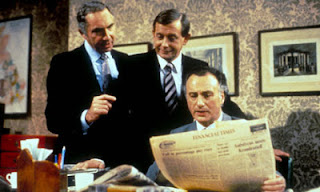 Their frustrations are summed up by the exasperated Jim Hacker, the series’ fictional prime minister, who has to delve through a foot-high pile of ministerial paperwork to find an important and controversial policy proposal buried at the bottom.

Nick Herbert, the former policing minister, this week told the BBC: “Yes, Minister was supposed to be a comedy but I soon realised it is an essential training manual.” His criticisms echoed those of Steve Hilton, David Cameron’s former policy chief, who reportedly told students on his Stanford University course: “The bureaucracy masters the politicians. I don’t mean that in a hostile way – it’s just a fact.”


Mr Gove’s former cabinet colleague, Andrew Mitchell, also ran into resistance when trying to change the way the Department for International Development delivered aid. Civil servants were surprised to see policy briefing notes that failed to meet his standards returned to them with the word “bollocks” stamped on the front."

Referring to the aforementioned Niskanen's model of bureaucracy and the real problems facing government ministers in their decision-making, or more importantly in the implementation of their decisions, is it possible that in democracies political power of those elected to rule is being significantly constrained by a bunch of unelected bureaucrats? If so, we can rightfully call this the Sir Humphrey Appleby paradox (based on the fictional character from "Yes, Prime Minister"), in which politicians with power are holding the bureaucrats who work for them to blame for the lack of proper implementation of reforms and the lack of political will to solve the most important issues in a society.

Could this be just one out of many justifications for political failure where parties are reluctant into cutting concessions of their support groups? Most probably. Even though I do believe that bureaucrats working in government departments are acting as self-interested agents (in terms of maximizing their salaries and perks), I don't believe their bargaining power is so great that it can stop serious reforms. In today's world we have seen plenty of ground-breaking reforms been pushed through despite their controversies (think of the Health Care Bill, or the Dodd-Frank Act in the US, or the NHS or schooling reforms being undertook in Britain, not to mention several other major changes and decisions). This proves that political will can resolve problems if it's strong enough. The issue at stake is always which types of reforms are necessary and which interest group is about to lose its concessions. This is what is stopping reforms, not bureaucrats.

The FT text finishes by acknowledging this

"But even if ministers still feel they are being thwarted by an army of Sir Humphreys, the reality is that Whitehall now works in a different way. .... Ministers are often still too swamped with departmental responsibilities to have time to think politically and strategically. But while in the past this may have allowed mandarins to run rings round them, the politicians now also have influential party-appointed special advisers.

Ministers will always complain that officials try to stop them doing what they were elected to do. But, as the NHS goes through another dramatic upheaval, with the school system drastically transformed and the benefits system about to be overhauled, it seems they, rather than Sir Humphrey and his ilk, have emerged victorious."

If politicians fail, there is no one to blame but themselves.
Philosophy Political economy Public Choice UK