January 01, 2013
The fiscal cliff has been averted, for now. It appears that the commitment device I was referring to in the previous text was strong enough after all. My argument was that the Nash equilibrium of the bargaining game will prevent an outcome and force the US down the cliff. I modeled it as a weak commitment device, without time discounting, and without having written down any of the parties' utility functions. Having included these parameters, the game would have given a scope for a cooperative equilibrium, however with a lower probability than a non-cooperative equilibrium. This can be extended in a lot of ways.

Anyway, I wasn't all that wrong, since the budget cuts deal was put off for two months (so no deal was reached here - the model didn't account for extending the deadline), there were no reforms to entitlement spending and there were no reforms of the complex tax code. The tax rate deal was reached, taxing only individuals earning more than $400,000 p/y (at 39.6%, from the previous 35%). This was all approved in the Senate (89-8), and waits to be approved in the House*. I guess this is a clear win for the Democrats ("taxing the rich"), even though their part of the bargain is left to be agreed upon in the next two months. I expect another situation similar to last night's.

Here are some of the reactions on last night's deal:

From the New York Times:

"Despite repeated, intense and personal efforts by President Obama and Speaker John A. Boehner as well as bipartisan coalitions, gangs of senators, supercommittees, special commissions and wonky outsiders, the grand bargain remains the elusive holy grail of fiscal policy and seems destined to stay that way for now. 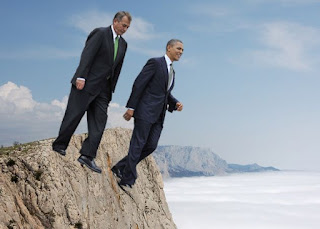 ... While Congress appeared on Monday to be lurching to a deal to avoid significant tax increases for millions of Americans, the emerging patchwork tax deal would push a series of fights into the next Congress, most of them very likely to be marked by the same 11th-hour, rancorous dynamics that have been the signature of every other fiscal deal.

Most pressing, Congress will have to come together as early as next month to lift the debt ceiling, which Republicans are already hoping to leverage to eke more spending cuts from Democrats. A similar fight almost led to default in 2011, and damaged the nation’s credit rating. ...

...“That’s the nature of the dysfunction,” said Julian E. Zelizer, a professor of history and public affairs at Princeton. “For the parties, it gives them temporary cover and to fight again on the issues in the next few months. The parties please their base, but the country does not get a solution.”

But that seems to be the nature of what constitutes progress in such a sharply divided political world."

From the Wall Street Journal:

"By waiting until the last minute, and by cutting a deal on a much smaller scale than either side once envisioned, Washington also deferred many of its thorniest questions, though perhaps for only a few weeks. In late February or early March, the Treasury Department will run out of extraordinary measures to avoid exceeding the government's borrowing limit—which it otherwise would have reached on Monday—and Congress will need to approve an increase.

The delay in the spending cuts will run out about the same time. In effect, Congress has delayed the fiscal cliff by erecting a new and potentially more dangerous one."

From the Economist: (entitled "Short-term relief, and little else")

"By avoiding that hit and finally nailing down numerous features of the tax code, the deal lifts a cloud that had hung over the economy and investor confidence. But on almost every other point, the deal falls short of already low expectations. ...

... While Republicans will try to use the sequester and debt-ceiling negotiations to secure the spending cuts that this week’s agreement omitted, Mr Obama signaled today he was equally determined that taxes have to rise further, too. “If Republicans think that I will finish the job of deficit reduction through spending cuts alone…they’ve got another thing coming,” he said in a brief public appearance Monday that riled Republicans with its partisan, combative tone. It may be that Mr Obama was mostly trying to reassure his own liberal base that it was the opposition, not him, who caved in this time. But it may also be a sign of the tone likely to prevail in coming months."

And my favorite reaction comes from Greg Mankiw:

"The fiscal deal struck last night makes one thing clear: President Obama must have really hated the recommendations of the bipartisan Bowles-Simpson commission that he appointed. The commission said that we needed to reform entitlement programs to rein in spending and that increased tax revenue should come in the form of base broadening and lower marginal tax rates. The deal appears to offer no entitlement reforms, no tax reform, and higher marginal tax rates. After all the public discussion over the past couple years of what a good fiscal reform would like like, it is hard to imagine a deal that would be less responsive to the ideas of bipartisan policy wonks."

This is particularly sad, since this is what "bad" austerity implies; higher taxes, no spending cuts, no reforms (see previous texts, here, here, here and here). Mankiw is right; after all the public discussion over how the reforms should be initiated, how to rein in the tax code, what are the good and bad examples of an austerity policy and how is it supposed to be implemented in the US to help it grow, it is surprising that the deal includes none of the "good" sides, and focuses exclusively on raising taxes and failing to address any long term issues (for now).

*Update (02.01.2013): The deal passed the House (257 to 167), with 85 Republicans joining 172 Democrats and voting for a rise in taxes first time in the past two decades.
Budget Debt Recovery Social Spending Taxing USA