Graph of the week: credit and investment booms

August 15, 2013
From Credit Suisse here is a graph comparing the non-financial private sector credit growth and growth of fixed capital formation (i.e. investments), both with respect to GDP for a number of mostly developing nations: (click to enlarge) 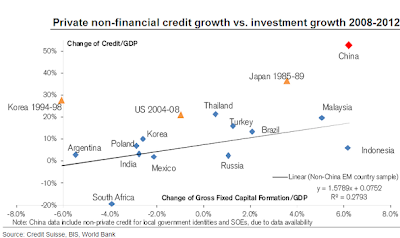 What it reveals immediately is the dangerous position China is currently in.


The scatter plot offers a good insight into some basic wisdom in economics; "when credit growth significantly outpaces investments into the economy, a nation could be in for a deleveraging period." We can see three very good historical examples of this almost stylized fact; the booms in Korea 94-98, USA 04-08 and Japan 85-89, after which all these countries experienced a huge slump and a painful recovery (too bad we can't see any Eurozone economies in there, particularly Britain, Ireland or Spain).

Now look at China. One can argue it's only a matter of time before it's bubble bursts and China enters a large and painful deleveraging period (similar to what the West is going through now, and even more similar to what Japan had / is having in the past 20 years). When I predicted in a previous text that China is not far away from emulating the Japanese lost decade(s) scenario, it's slump could be even worse. The amount of malinvestment is just too high and is going nowhere, while credit growth is literally unstoppable. One can only avoid the basic laws of economics for so long. Just ask Europe.
Business Cycle China Debt Graph of the Week Risk