May 01, 2014
"Inflation is always and everywhere a monetary phenomenon."


In the long run expansive monetary policy (measured via changes in money growth) can only deliver higher prices (one cannot print their way into prosperity - just look at Zimbabwe). If a country's central bank prints too much money its value goes down so prices go up, while the opposite - deflation - occurs if the central banks fails to supply enough money. However in the short run the connection is not as strong.


Not all price changes result in (or a consequence of) inflation. It is usually also important to look at the velocity of money in explaining the movements of prices. Sure the majority of inflationary pressures can be attributed to monetary growth but in times of a liquidity trap the velocity of money will paint a much clearer picture of expected inflation.


To define it precisely velocity of money represents the average rate at which money circulates in the economy, i.e. the rate at which goods and services are bought and sold. Usually if consumption is low velocity is likely to be low as well - people spend less so money circulates slowly. Furthermore as I've pointed out earlier velocity of money tends to move very closely with the employment-population ratio (the real labor market indicator), which also makes perfect sense - if the labor market hasn't recovered neither will the rate at which people spend their money.

Velocity is calculated simply: dividing nominal GDP by M2 money supply. Since we know that the denominator is growing much faster than the numerator, naturally the ratio is decreasing. As can be seen in the graph below - velocity is on its lowest ever level since WWII and the Great Depression (the full data is here).
This again does not mean that high velocity will lead to high inflation, but low velocity will surely prevent inflation from occurring. Basically we can say that the decline in the velocity of money has offset the average annual money growth. Or if you want, the decline in NGDP (fall in employment and consumption) has offset the money growth which is exactly why inflation hasn't occurred.

What about low interest rates? How come they aren't causing inflation? Or at least higher inflationary expectations? Milton Friedman again has an answer:


Yes, it is somewhat strange to claim money is tight with all the QE being done, but there is an explanation for this as well. And it goes back to the velocity of money. Inflation hasn't kicked in since velocity is still low, or in other words the NGDP still hasn't really recovered. Plus all the QE didn't turn up in the real economy, it's still mostly stuck with the banks. Even the companies are hoarding mass amounts of cash.


If the economic recovery remains to be disappointing (the likelihood of which is very possible) then we can observe this "tight money" situation for a long time. Inflation will still be borderline deflation and monetarists will still be calling for "easier money". Not via raising interest rates of course, but by proposing things like NGDP targeting or credible signaling of easier long term monetary policy (I've summed up the gist of their ideas here).

For the record I'm even more convinced that the crisis was far from an AD shock and cannot be helped with either monetary or fiscal stimuli. If it could it would have already been helped - there is a reason why velocity is low and banks and companies are hoarding cash.

This clearly is a structural shock. Pumping money in a low interest rate environment while debt ratios are still rising in addition to episodes of wrong austerity policies is a lethal combination that perfectly emulates Japan. And today even Abenomics can't help them. At least not the two arrow approach. Europe needs to be ready for at least one "lost decade" of stagnation. This is relatively easy to endure for rich countries like the UK or Japan, but much harder for relatively poorer countries in Europe which need their growth to catch up.

This appears the be the headline nowadays. Sweden is the latest country to experience a deflationary episode. Krugman reports:

"It’s amazing: Sweden, which at first weathered the crisis fairly well, and faced none of the institutional constraints of the euro area, has managed — completely gratuitously — to get itself into a deflationary trap." 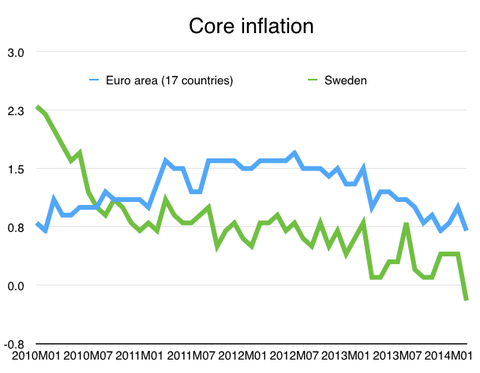 However the interesting point about Sweden is that they've raised their interest rates during the crisis (remember, Sweden is not in the Eurozone), which has led to a temporary deflation episode. This is why Krugman criticizes the Swedish C.B. and how they failed to listen to Lars Svensson and his warning signs. So in this situation low interest rates will result in low inflation (however due to low velocity), while raising them will lead to deflationary pressures.


I'm not sure this deflationary episode will last, however. Inflationary expectations in Sweden are still high (besides it didn't take long for Sweden's finance minister Andres Borg to react debunking the whole story). The fact that some EU countries were hit by a temporary deflation episode was primarily due to no major food or oil price shocks recently. I don't think Sweden or Europe are falling in a deflationary trap. Perhaps a slow-growth trap (not Sweden but Europe) with Japanese descent, but definitely not a deflation spiral, as some seem to claim.

Finally to wrap this up, here's from an older blog post from Mark Thoma:


"While many factors affect prices that are beyond the Federal Reserve’s direct control, eventually monetary policy tends to re-emerge as the key driver of inflation. After abstracting from short-term movements caused by economic disruptions, recessions, and wars, inflation is ultimately a monetary phenomenon: since 1929, the average annual percentage increase in the GDP deflator has been 2.8 percent, and the average annual growth in excess money has been 2.9 percent."