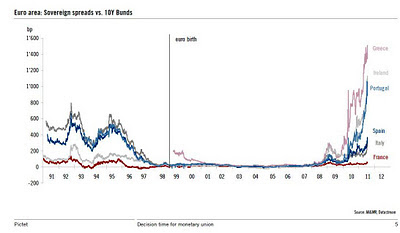 Source: FT Alphaville, original source: Pictet
It is an interesting proof to the propositions made here that the introduction of the euro equalized the risks across eurozone which gave the peripheral countries an opportunity to borrow cheaply. This opened the scope for excess borrowing and fueling domestic growth with consumption and government expenditure. As an effect all the peripheral countries experienced severe current account deficits.
What is interesting in the figure is how the spreads were much more volatile before the euro and the rapid decrease of volatility (and hence risk) once the euro was introduced. It appeared that every eurozone country could borrow as if it were Germany. It is obvious that this was fiscally unsustainable. The US spillover effect can be seen in 2008, but the credit squeeze that came about in 2009 fully uncovered the eurozone's instabilities and led the bond markets to react the way they did - rapidly adjusting the risks of the eurozone sovereigns.
Eurozone Financial Crisis Graph of the Week Risk