January 05, 2012
The graph of the week section continues with comparing the current recovery with the fastest, the average and the slowest recovery so far. 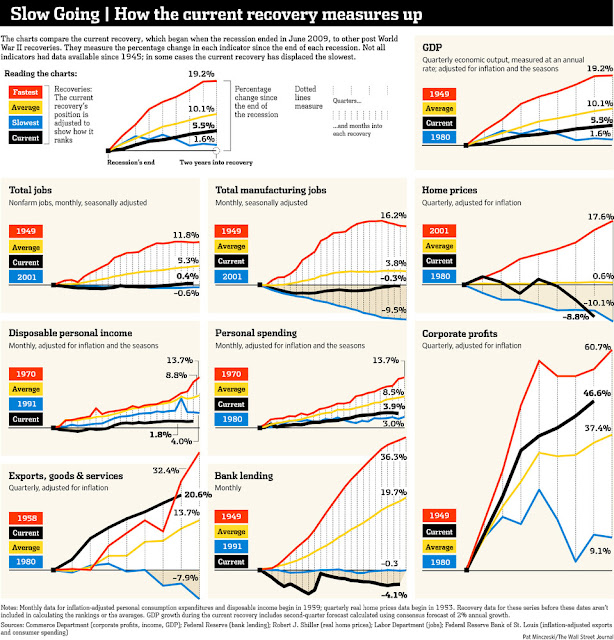 
So far the current recovery is not doing so well. In comparison over 9 categories, the current recovery appears to be slower than the average (in some categories significantly slower than the average). In general it isn't the slowest recovery so far, but it is dangerously close to being one (especially since the comparison is drawn over a set of recoveries - this means that some inconsistencies may arise in comparing each of the previous ones with the current one).
The rate of new jobs being created (total jobs and manufacturing) is particularly low (0.4% and -0.3%), just as the housing prices (which are still falling, -8.8%), but they're both just above the slowest recovery levels.
The worst points of the current recovery are disposable personal income, which is alarmingly low (1.8% growth over the last 2 years) and bank lending, which is negative and with a gap of 24% from the average recovery, and 4% from the worst recovery so far. Both parameters (together with the jobless rate) accurately depict the current rising levels of uncertainty and lack of confidence. Less money left to individuals and low levels of bank lending constrain businesses from investing and consumers from consuming, resulting in low levels of aggregate demand. No jobs are being created, and hence disposable income can't be growing. People are reluctant (or unable) to spend their earnings not being able to anticipate the certain future stream of income. Or perhaps this is the case of high income taxes that discourage consumption and result in low disposable incomes? Personal spending growth is a bit higher but is in general a lot lower than the average. This is particularly interesting since this is the first recovery in which personal spending growth was higher than the growth of disposable income. Does that mean that people are still taking on debt to finance their consumption?
One thing is certain though, the small businesses (the drivers of growth) are struggling because of a lack of bank lending. Corporate profits are high, bank lending is low and no new jobs are being created. The lack of bank lending hence isn't damaging to the big corporations, but to small businesses and potential start-ups. They are the ones not creating new jobs, and the economy desperately needs them to do so.
All in all, it doesn't look so good so far for the current recovery. With worrying, double-dip signs of 2012, it might turn to be even worse in effect. Let's wait and see..
Austerity Business Financial Crisis Graph of the Week Recovery