Percentages and inequality: who is the top 1%?

January 17, 2012
This week the focus of the blog will be on the rising issue of inequality. Firstly I aim to demystify the rant over the 1% of the rich and their tax burden, after which I will carry on about inequality in general and why is it such an important issue to understand.

I didn’t give much attention to the Occupy ‘99%’ movement, but I feel I ought to. I still don’t see the point in trying to explain to them the errors of socialism and how their movement is paradoxically a call for decentralization, not collectivism, but I will touch upon some of the arguments in the whole inequality debate.

What surprises me the most is the hostility created towards the richest 1% of Americans (or Britons) under the populist notion that they made money from everyone else in the crisis, making them more rich than before whilst making everyone else poorer. What needs to be clarified is who are the 1% in America. According to the claims of the Occupy movement they comprise mostly of hedge-fund managers, greedy bankers - the Gordon Gekkos (or Mitt Roomneys) of Wall Street, and those who inherited their wealth (the Paris Hiltons?). They have made money while millions have lost their jobs and hence increased the inequality gap in the US. In addition, these culprits of the crisis don’t even pay their fair share in taxes. Reality may be a bit different.

Data on rising income
Recent work by economist Emanuel Saez from UC Berkeley adds to the picture of rising income of top earners and the rising inequality between the top 1% and the rest. (On his webpage you can download some of his data and play with it).

A paper by Atkinson, Piketty and Saez (2011) shows that the real annual income growth of the top 1% from 1976 to 2007 was 4.4%, while the average real income growth was only 1.2%. They conclude that the portion of total income growth captured by the top 1% was 58%. The top 10% have doubled their income in the same time span. Here’s a graph showing the substantial increase in income by the top earners:

And here is the graph from the Congressional Budget Office (CBO) report verifying this fact: 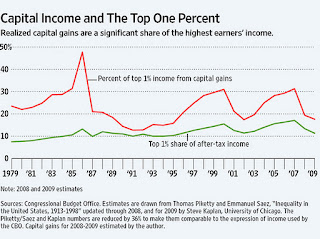 The income growth of the top 1% has fallen since, however, as the financial crisis induced proportionally more losses to those invested in the financial sector. Their growth didn’t fall rapidly, but since 2007 they capture a lesser portion of the total income (not included in the Piketty and Saez database), which is shown on the CBO's estimates.

What the paper omits to mention is that those comprising the 1% aren't the same people now as they were 30 years ago. In fact, every year around 20-30% of those in and out of the 1% changes. There is constant mobility among the top 1% income earners. Advancements in technology and innovation are made by those in the top 1% who used their unique skills and ability to help everyone else – either by making up new products or services or by improving the existing products thus making our lives easier.

What they also fail to realize is that during that time (1979-2007) we have experienced an amazing rise in computer technology and other advancements. In those 30 years we have seen the rapid rise (and creation) of Microsoft, Google, Apple, Oracle, Dell, Amazon, Facebook and many, many more. Beyond the IT sector, it’s the oil companies who are at the very top. The same period saw a substantial rise of Wall Mart, the World’s largest company by size of revenue. Combing the wealth of all 4 inheritors of Sam Walton’s empire (yes, they have inherited their wealth, but are in no sense irresponsible with their company), they would be the richest person in the world. Apart from the oil industry (Exxon, Shell, BP, Chevron, ConocoPhillips etc.) the automobile industry grew rapidly and created enormous wealth, and so did the electronics industry, telecommunications, retailers, chemicals, fashion and finally the finance industry.

Yes, there was a strong growth of the financial sector, but this was in order to support the creation of all these new empires when they were start-ups. What culminated in the current crisis thanks to the regulatory paradox and artificial demand, shouldn’t be blamed on years of created wealth, new products, new energy and the simplification and improvement of our lifestyle (at least in the West).

This is why I find such inequality data misleading. Yes, the growth of the 1% did rise substantially, but those who were driving this income growth weren’t creating nothing, they created value added for the economy and were rewarded for it.

Are rich and powerful today the bankers and the CEOs of financial companies and hedge funds? Let’s have a look at the Forbes list of the 400 wealthiest Americans.

Only around 60 out of 400 people on that list are in some sort of business regarding the financial sector, including hedge funds, leverage buyouts, investment banking or insurance. And not many of those were big CEOs, rather they were investors like Warren Buffet or George Soros. Do they create value? Yes, indirectly, by building their corporate empires and their own wealth they are able to spend that money on a variety of goods and services (and companies) and therefore create and sustain other jobs. Those who ultimately create jobs are the rich. All those on the top 1% list, or the Forbes 400 list, created the majority of jobs during the last 30 years (not to mention the creation of completely new careers).

Another paper by Bakija, Cole and Heim (2010) finds who exactly comprised the top earners in the US. In the top 0.1% only 18% are in banking and finance. Around 40% are entrepreneurs and managers of nonfinancial businesses. The rest vary from lawyers (6.2%), medical professionals (4.4%), real estate (4.7%), sports and entertainment (3%), scientists and IT professionals (4%) and so on. Therefore, the bias against the bankers shouldn't be the bias against the rich themselves. This should be clarified to all the supporters of the Occupy movement.

...and why are they paying less taxes?

Regarding the non-payment of taxes here’s what Michael Tanner of the Cato Institute finds:

“...the nonpartisan Tax Foundation has found that since 2007, there has been a 39 percent decline in the number of American millionaires. Among the "super-rich" the decline has been even sharper: The number of Americans earning more than $10 million a year has fallen by 55 percent. In fact, while in 2008 the top 1 percent earned 20 percent of all income here, that figure has declined to just 16 percent. “

“...the top 1 percent pays 36.7 percent of all federal income taxes. Because, as noted above, they earn just 16 percent of all income, that certainly seems like more than a fair share.”

“Beyond taxes, the rich also pay in terms of private charity. Households with more than $1 million in income donated more than $150 billion to charity last year, roughly half of all US charitable donations.”

And here’s another interesting article on the issue by Alan Reynolds in the WSJ.

In conclusion, the Occupy movement shouldn’t be disregarded, but they should be wary of their accusations. Bank bailouts, government lobby groups, cheep populist political concessions to acquire votes are not a part of a free market capitalism. They are the essential characteristics of crony capitalism. I agree with the occupy movement on one crucial point – things need to be changed. But the road to serfdom must be avoided.