Graph(s) of the week: economists and elections

October 18, 2012
The Economist recently had a story on the survey conducted among America's economists on  how they feel about the current recovery, and how they assess each of the two Presidential candidates. It should be said that the whole survey was a bit biased towards President Obama, since 45% of the respondents rated themselves as Democrats, while 7% were Republicans. According to this it's even more surprising that the Romney campaign attracted over 600 US economists (6 Nobel prize winners) to sign up for the Hubbard-Taylor-Mankiw plan. I'm guessing not all of them responded in the survey. It attracted only 312 NBER research associates and 51 NABE forecast panel members (which is actually a fair sample). 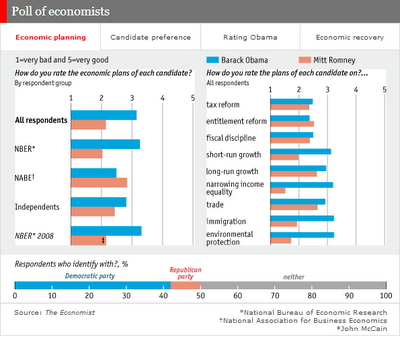 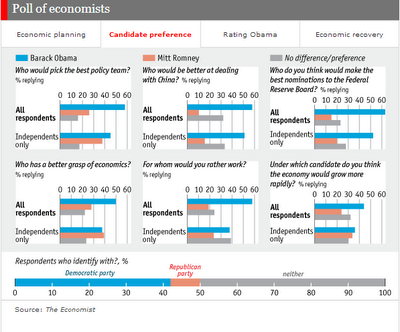 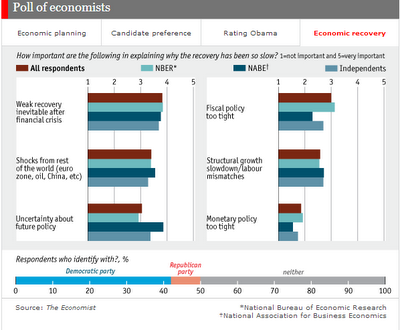 It's not that economists have any influence on who turns out to be the electoral winner, but it's interesting to examine how they feel on things they are supposed to be experts on, like the recovery. Even though they rarely agree with each other.

The most interesting is the divide among the academics on the reason why the recovery is so slow:

It's good that they mostly agree that the recovery tends to be weak after a financial crisis (see graph 3 as well), but it's not so good that a lot of them don't realize the structural slowdown and an unsustainable pre-crisis growth model, which failed to respond to the technological shock of the past 15 years.
Graph of the Week Political economy Recovery USA