Nobel prize in economics to Alvin Roth and Lloyd Shapley

October 15, 2012
The 2012 Nobel prize in economics has been awarded today to Alvin Roth from Harvard and Lloyd Shapley from UCLA for their contributions in "the theory of stable allocations and the practice of market design". What this means is the following: 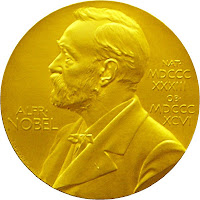 "This year’s Prize to Lloyd Shapley and Alvin Roth extends from abstract theory developed in the 1960s, over empirical work in the 1980s, to ongoing efforts to find practical solutions to real-world problems. Examples include the assignment of new doctors to hospitals, students to schools, and human organs for transplant to recipients. Lloyd Shapley made the early theoretical contributions, which were unexpectedly adopted two decades later when Alvin Roth investigated the market for U.S. doctors. His findings generated further analytical developments, as well as practical design of market institutions."

So it was a successful empirical application from Al Roth, based on a game theory approach from Shapley (something called the Gale-Shapley algorithm). This explains how in certain situations when the price mechanism fails to allocate resources efficiently, some individuals can still cooperatively reach an efficient equilibrium allocation. The application for this in the real world is allocation of kidneys to patients for example, or students to high schools, or matching in marriage between couples. See here for a really good explanation of the ideas, or read it from Alex Tabarrok at Marginal Revolution:

"The field of matching may be said to start with the Gale-Shapley deferred choice algorithm. Here is how it works, applied to men and women and marriage... Each man proposes to his first ranked choice. Each woman rejects any unacceptable proposals but defers accepting her remaining suitors. Each rejected man proposes to his second ranked choice. Each woman now rejects again any unacceptable proposals, which may include previous suitors who have now become unacceptable. The process repeats until no further proposals are made; each woman then accepts her most preferred suitors and the matches are made.

What Roth has done is extend the Gale-Shapley algorithm to more complicated matches and to actually design such algorithms to solve real problems. In the 1970s, for example, the medical residency algorithm began to run into trouble because of a new development, the dual career couple. How to match couples, both doctors, to hospitals in the same city? By the 1990s assortative matching in the marriage market was beginning to derail matching in the doctor-hospital market! Roth was called in to solve the problem and moved from being a theorist to a market designer. Roth and Peranson designed the matching algorithm that is now used by Orthodontists, Psychologists, Pharmacists, Radiologists, Pediatric surgeons and many other medical specialties in the United States.

Most famously, Roth has worked on improving kidney allocation...

...Your spouse is dying of kidney disease. You want to give her one of your kidneys but tests show that it is incompatible with her immune system. Utter anguish and frustration. Is there anything that you can do? Today the answer is yes. Transplant centers are now helping to arrange kidney swaps. You give to the spouse of another donor who gives to your spouse. Pareto would be proud. Even a few three-way swaps have been conducted.

But why stop at three? What about an n-way swap? Let’s add in the possibility of an exchange that raises your spouse on the queue for a cadaveric kidney. And let us also recognize that even if your kidney is compatible with your spouse’s there may be a better match. Is there an allocation system that makes all donors and spouses better off (or at least no worse off) and that maximizes the number of beneficial swaps? In an important paper Alvin Roth and co-authors describe just such a mechanism and show that it could save many lives."

Who says that theoretical economics isn't applicable to the real world? Game theory is universally applicable.


Alvin Roth co-runs a blog, Market Design, which I noticed has suddenly gained momentum and audience (judging by the comments on his previous posts).


As for the predictions, Tyler Cowen missed it this time, but WSJ was spot on by saying that Roth was the favorite to win it.