Another one on tax hikes vs spending cuts

November 17, 2012
This is becoming one of the most frequent topics on the blog, just as much as the Eurozone was exactly around this time a year ago (in fact, November 2011 was the boiling point for the Eurozone crisis).


The debates on the recovery are still occupying most of the attention among economists, especially in perspective to elections and politics. These debates tend to be divided on the basic approach as to how are we supposed to initiate stronger economic growth. Those on a center-left political and economic spectrum often speak of negative consequences of the austerity approach, emphasizing the "austerity vs. growth" story. Their approach is to initiate a stimulus combined with higher taxes on the rich immediately (in the short run), and then combat the fiscal sustainability in the long run. The center-right economic and political arguments desire an immediate combat of the deficit and the debt (austerity) and want to do it mainly through spending cuts and tax cuts (in order to decrease the size of government in the long run).


The IMF is usually the biggest critic of the austerity approach. Their highly cited 2011 paper on expansionary austerity aims to show the negative short-term effects of a fiscal consolidation on economic activity by comparing two approaches: (1) the conventional approach that "identifies discretionary changes in fiscal policy using a statistical concept such as the change in the cyclically-adjusted primary balance (CAPB)" (this approach can be biased since non-policy changes like the stock market boom can eliminate potentially contractionary effects of the consolidation); and (2)

"To address these possible shortcomings, we examine the behavior of economic activity following discretionary changes in fiscal policy that historical sources suggest are not correlated with the short-term domestic economic outlook. In particular, we consult a wide range of contemporaneous policy documents to identify cases of fiscal consolidation motivated not by a desire to restrain domestic demand in an overheated economy, but instead by a desire to reduce the budget deficit. As Romer and Romer (2010) explain, such fiscal actions represent a response to past decisions and economic conditions rather than to prospective conditions. As a result, they are unlikely to be systematically correlated with other developments affecting output in the short term, and are thus valid for estimating the short-term effects of fiscal consolidation on economic activity."

So basically, they identify changes in policy motivated to reduce the budget deficit, not to respond to economic conditions. They refer to this as the "historical approach", or better yet "deficit-driven consolidations".


Note how the IMF researchers follow the austerity vs. growth story, implying that the calls for austerity are only based on deficit cutting, and are in no way a response to improve economic conditions. This is, in fact, true since the current set of austerity policies in Europe are actually only aimed at cutting the deficit, primarily by using tax hikes, which is, as the paper later shows and which I have emphasized several times, a wrong approach.

Anyway, this is their result: 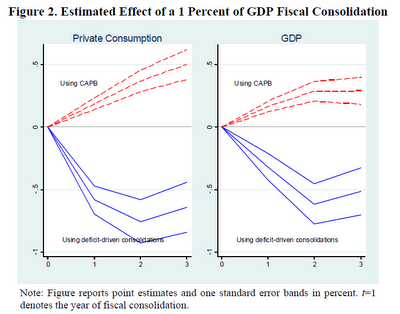 "Our estimates imply that a 1 percent of GDP fiscal consolidation reduces real private consumption over the next two years by 0.75 percent, while real GDP declines by 0.62 percent."

Note the big difference in the results of the two approaches. The crucial point of the paper, I think, was to point out that conventional austerity economic policies are from the start based on faulty economic thinking (the idea of 'expansionary consolidation'). I don't think that's true for economists, but more for politicians using such an approach, since it is important to differentiate between various ways of using the fiscal consolidation approach.

They do this by comparing tax-based and spending-based consolidations: 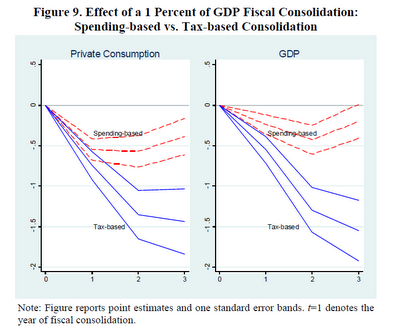 The conclusion they reach is very similar to the one from Alesina, Favero and Giavazzi (2012): spending cuts are much less painful and costly in terms of loss of output than tax hikes.

In addition, Gareth Jones looks at how this relates to the standard Keynesian story:

"Notice that the graphs are saying that the tax multiplier is bigger than the spending multiplier, at least in these settings. Quite the opposite of undergraduate Keynesianism. This isn't the final word on the matter, but if you'd like to see another study of multipliers that doesn't fit neatly into the Keynesian box--and written by top New Keynesians--check out the abstract and conclusion of this paper by Blanchard and Perotti."

Here's from the Blanchard and Perotti (2002) paper:

So, once again, why are the politicians using the tax-based approach and not a spending-based consolidation approach? Even this behaviour of politicians is quite logical given the pressure they are facing to close the budget deficit and keep a favourable investment grade. My earlier text sums up the reasons:

All the laid off public sector workers that are supposed to find jobs in the private sector are unable to do so since the private sector isn't hiring due to the many existing constraints it is facing. Unemployment starts to go up, supported by an increasing number of graduating youths for whom finding a job is now even more difficult, making the situation look bad for the politicians in power. This means that the politicians, under even more pressure to close the budget deficit, now need to cease spending cuts and stop firing more civil servants and bureaucrats, since they don't want to make the unemployment picture even worse than it already is. In addition, more unemployed would depress consumption even further. So the government then relaxes the spending cuts and public sector reforms and focuses mostly on increasing taxes to close the budget deficit. The government starts running out of options, as further spending cuts become politically unfavourable while increased taxation is needed to continue closing the budget deficit.

What is missing is political will.
Austerity Economic theory Financial Crisis Recovery Taxing