March 23, 2013
Even though the focal point of attention this week was Cyprus, in Britain the central issue was the 2013 Budget, for which I found some policies encouraging but some of them deeply disappointing  implying that there Osborne still hasn't got a clue as to how to initiate the recovery.

Anyway, from the Budget and the OBR report I found a couple of interesting graphs, some good, some bad. I start off with tax competitiveness and how the UK has significantly increased its competitiveness vis-a-vis the corporate tax rate cuts on KPMG's survey (the survey is based on businesses responding to the changes): 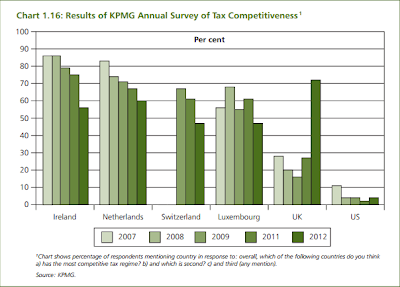 Even in comparison the 20% announced corporate tax rate (in 2015) is beginning to look very good: 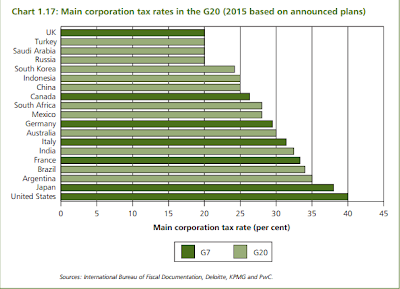 On this list, among the lower rates, the UK has by far the strongest institutional system and rule of law, thereby triggering positive signals to attract new investments. It's unfortunate for the US and Japan not to follow upon this. The US is particularly troublesome in this perspective especially with regards to the first graph and the business perception of their tax competitiveness.

Moving on to the OBR report, with slightly worse off news regarding the slow recovery and declining Total Factor Productivity. First up is the output gap, estimated to be -2.7% in 2012: 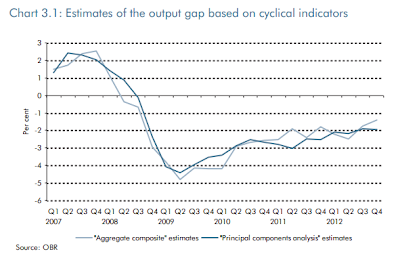 Using the same method they have calculated the declining Total Factor Productivity (TFP), which is starting to turn into a serious issue for the British economy: 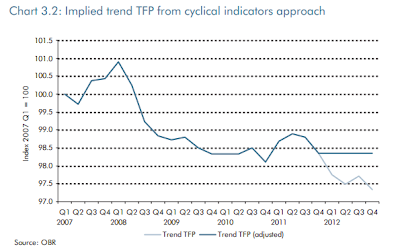 And it's a real puzzle:

"...the cyclical indicators imply a sharp fall in trend TFP through 2012, which would imply that the economy has become noticeably less efficient in its ability to combine inputs to produce a unit of output. Given likely movements in the capital stock, this also implies a fall in trend labour productivity. A sustained fall in trend TFP and trend labour productivity seemed plausible during 2008-09, given the severity of the financial crisis at that time, its impact on output from the financial sector, and the consequences for capital allocation in the rest of the economy. In recent quarters, however, the financial system has not been under anything like the same strain (although it remains impaired)." (OBR, Economic and Fiscal Outlook, pg.31)

However, some explanations are afloat:

"Output per hour and output per worker were 12 per cent and 13 per cent below their pre-crisis levels in the fourth quarter of 2012... In December we set out various possible explanations for very weak productivity seen in the UK economy since the 2008-09 recession, some of which imply a permanent hit to productivity and potential and some of which imply a temporary hit...

I would add my arguments on distorted signals to employers resulting from the government's work schemes, where employers lack the incentive to hire but are encouraged to take the government benefit and pile up on some workers who aren't necessarily improving production or adding anything to the company. These are all just theories for now, with neither fully explaining the productivity downturn, but there could be truth in each of them. I believe this could be a fruitful ground for future research, especially for labour market economists.
Budget Graph of the Week Labour market Recovery Taxing UK