March 19, 2013
This week the negotiations in Cyprus over its fragile banking system reached a new low. Cyprus was given a €10bn bailout (they desired €17bn initially) from the Eurozone to recapitalize its banking system, with the price they have to pay for this being dire. This radical bailout plan forces a 9.9% tax on deposits over €100,000, and 6.7% on deposits under €100,000. Unlike previous bailouts in Greece, Portugal or Spain where bond-holders took a big cut, this is the first time a bailout proposal will fund itself from peoples' savings. The signal this is sending is that small savers (not responsible for the crisis) should be punished while the bond-holders who willingly took risks should be protected. Needless to say such a bailout proposal is very likely to turn into a disaster for the domestic economy. Investors were spooked, the people went to the streets, mainly to pull out their money from banks, while markets dropped at the sight of such news at the start of trading day on Monday. 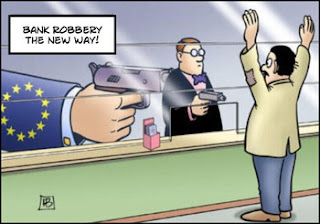 This time the policymakers actually caused a bank run. Touching into people's savings is an extremely risky policy, particularly if it comes from a government considered to be incompetent. The situation resembles the one that has happened in Argentina in 2001 under the Corralito, where an exchange rate depreciation was made that has reduced the people's savings by three quarters. This is what caused huge riots and an immediate bankruptcy of the Argentine economy. Even though things aren't as radical in Cyprus at the moment, the Argentine case is a good example of what happens when peoples' savings are tampered with. It leads to panic, bank runs, riots and protests, immense political instability, great economic distress and altogether it completely rules out any chance for recovery any time soon.

It's not only the immediate problem of capital flight; such a move would trigger an even worse long-term deal where savers will be completely discouraged from ever depositing their money in Cypriot banks. Both domestic residents and particularly foreigners. It won't be long until a number of Russian citizens (who account for half of the deposits in the country) start pulling their money out of Cyprus. It seems that Cyprus will be a tax haven no more (they were forced to raise their corporate tax rates by 2.5 percentage points as well). And this was actually the crucial part of the negotiations over the plan. It is easy to understand why Eurozone (Germany) was reluctant to drop a lot of money on Cyprus only to save wealthy Russians.

So, even if we can somehow justify the tax rate on deposits higher than €100,000, as this will mostly strike wealthy Russian depositors with money of dubious origin (so it is claimed), the levy on small savers is completely unfair and self-defeating. But there could be an explanation for this as well. Schumpeter, the columnist in the Economist, has a good idea why: "The most plausible explanation is that the Cypriot government itself preferred to spread the pain rather than wipe out non-resident depositors and jeopardise its long-term prospects as an offshore financial centre for Russian and other money."


Regardless of their motives, the idea is still an economic disaster, particularly if one thinks of how this news will transcend itself across the continent. This is a dangerous precedent that discourages savings and keeping money in banks. With enough problems as it is with banks not lending, more people pulling their money out and lowering their deposits would stifle bank lending even further, thus completely diminishing Eurozone's chances for recovery. And this time the blame will fall on Europe's policymakers who are proving to be completely incompetent in solving crisis situations. Greece and Spain were good examples of this, Italy shot itself in the foot, and now Cyprus is likely to turn into the worse solution yet.

I will end with the following thought:

"The bail-out appears to move Europe further away from the institutional reforms that are needed to resolve the crisis once and for all. Rather than using the European Stability Mechanism to recapitalise banks, and thereby weaken the link between banks and their governments, the euro zone continues to equate bank bail-outs with sovereign bail-outs. As for debt mutualisation, after imposing losses on local depositors, the price of support from the rest of Europe is arguably costlier now than it ever has been."

P.S. I have been corrected that the tax levy is not a tax on deposits per se. It is a one-off levy for which the depositors will be compensated by with the equivalent  amount in shares in their banks. For more details see here.


Oh, and the banks have been shut until Thursday to avoid a bank run until the deal is done. Parliament is scheduled to vote for the deal later today, and it is expected to change the levy for small depositors.
Austerity Bailout Banking Cyprus Financial Crisis Taxing